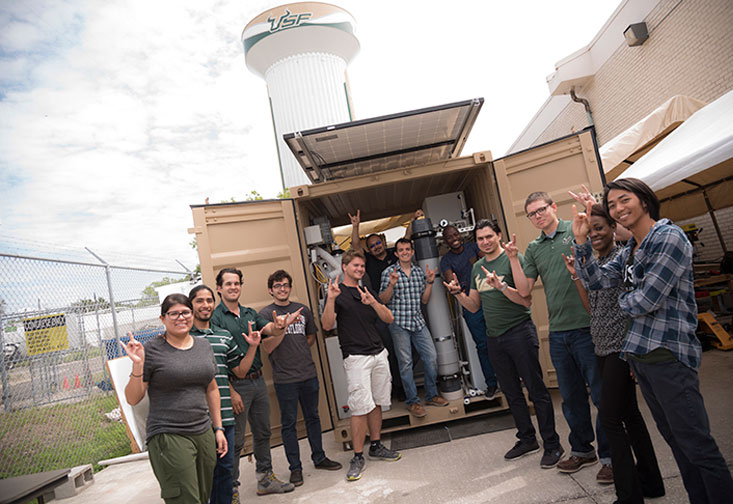 A team of researchers from the University of South Florida College of Engineering is conducting its final testing in preparation to ship its new and improved NEWgenerator to Durban, South Africa. It leaves Tampa via air freight in mid-March and will be installed in April. The technology generates nutrients, energy and water by safely recovering them from wastewater containing fecal organic matter and urine.

The NEWgenerator will be placed in an informal settlement to accompany sanitation facilities that have toilets, showers and sinks. As in many cities around the world, ongoing rapid, unplanned urbanization has placed a major strain on water and sewer systems. With assistance from local partners, the NEWgenerator will undergo rigorous engineering field testing to demonstrate off-grid water recycling, potentially helping facilities operate without being hooked up to sewer lines.

The NEWgenerator mimics a miniature wastewater treatment plant without the usual energy-intensive aeration tank that blows air to break down pollutants and the plethora of chemicals. By harnessing an army of anaerobic microorganisms, the process eliminates the need for oxygen, causing organic material to turn into biogas. Biogas is a renewable form of energy, allowing the NEWgenerator to generate electricity and run completely on its own when coupled with solar panels.

The NEWgenerator has a multistage disinfection process. First, a fine-pore microscopic membrane filter traps bacteria and viruses. Then, the clean water that passes through is disinfected with chlorine, similar to municipal drinking water. The recycled water can be used for toilet flushing in the sanitation facilities, thereby drastically cutting down on water demand, especially during times of drought. The water can also be used for irrigation.

Worldwide, community gardens are often found throughout unplanned settlements near CABs. However, plant growth is hard to sustain without fertilizer. Nutrients (nitrogen and phosphorus) safely recovered with the NEWgenerator will help make these community gardens vibrant by providing the fertilizers needed. This not only creates an urban greenspace, but potential food source and financial asset as well.

The solar-powered NEWgenerator is compact, mobile, autonomous and can operate remotely and completely off-grid. An alternative to septic tanks, the NEWgenerator’s capability for plug-in instant infrastructure to recycle water virtually anywhere in the word also has potential applications for dense urban spaces, remote areas, islands, resorts and parks, disaster/emergency relief and military operations.

The NEWgenerator is being delivered thanks to a $1.14 million grant from the Bill & Melinda Gates Foundation. The USF team, led by Associate Professor Daniel Yeh and Postdoctoral Researcher Robert Bair, is one of several teams worldwide selected to develop transformative non-sewered sanitation technologies called Reinvented Toilets that aim to help solve water and sanitation problems for billions worldwide. The NEWgenerator was first field tested in India in 2016, where it was connected to two electronic toilets. The USF team will be deploying two versions of the NEWgenerator to Durban. The first is an updated version of the unit used in India and provides service to 100 users/day. The second unit, expected to be deployed at the end of 2018, will ambitiously increase its capacity to serve 1,000 users/day.

Video and photos by Ryan Noone and Sandra C. Roa, University Communications and Marketing.