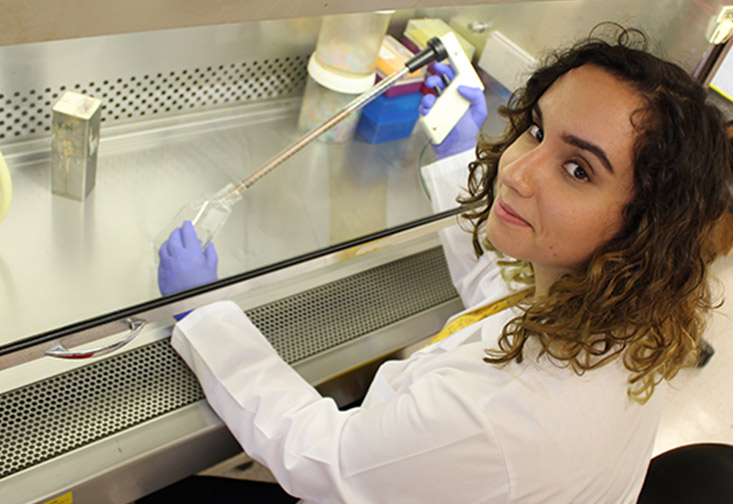 TAMPA, Fla. – USF Honors College junior Misha Fini has been named a Goldwater Scholar for 2018, chosen out of nearly 1,300 students nationally who were nominated through a highly selective process. The scholarship is the most prestigious undergraduate award in the country for science research and provides $7,500 for educational expenses and research support. Fini is one of only three students from Florida’s public universities to receive the award this year.

Fini, a microbiology major, is currently performing cancer research at Moffitt Cancer Center under her mentor and principal investigator (PI), Dr. Kenneth Wright. Their work investigates the causes of a protein that contributes to non-Hodgkin's lymphoma, a cancer linked to thousands of deaths each year.

The Goldwater Scholarship will help Fini continue her research and pursue a career goal of obtaining a PhD in cancer immunotherapy and becoming a university PI herself. Fini, who moved between two school districts often during elementary school and was unable to read in the second grade, understands the importance of education and the mentors who go the extra mile to ensure the success of their students.

She began her research at USF working with Dr. James Garey in his molecular biology lab. From there she developed a love of scientific research and secured a position in Wright’s lab.

“Dr. Garey and Dr. Wright are such wonderful mentors,” Fini said. “They opened my eyes to undergraduate research and helped me define my career goals.”

Although she began her studies at USF with an aim to become a medical doctor, Fini, who maintains a 4.0 GPA, has since turned her focus to research that could lead to medical breakthroughs.

“I’d like to work toward a better understanding of how the human body’s immune systems all work together to eradicate pathogens and how this can be used to defeat cancer,” she explained. “This research has the potential to discover new treatments and improve the quality of life of so many.”

Fini first learned about the Goldwater Scholarship through USF’s Office of Undergraduate Research and worked extensively with the Office of National Scholarships to create and refine her application.

“It is wonderful to see Misha’s success,” Honors College Dean Dr. Charles Adams said. “Undergraduate research is both valued and promoted throughout our university and it is great to see how our faculty and staff have supported, and continue to support, Misha as she pursues her dreams.”

Fini is the ninth Goldwater Scholar in USF’s history. Previous scholars have gone on to earn other nationally competitive awards and study at internationally prominent institutions as they work on research projects.

“The scholarly accomplishments of our Goldwater Scholars give us much to be proud of,” USF Provost Ralph Wilcox said. “I congratulate Misha and the dedicated USF faculty and staff who mentored her along the way. We know her discoveries and insights will have a major impact on our world, and we look forward to her continued success.”