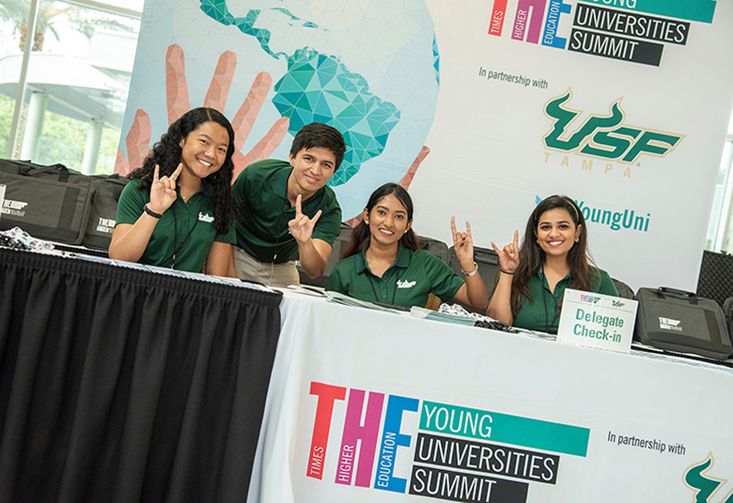 What makes a young university truly young? While there’s no doubt its years in existence are an obvious reminder of its youth – if you ask those who lead these institutions they’ll likely tell you it’s more about their ethos than their age.

Young universities define themselves by the ways in which those who work and learn there look to solve problems. Whether those problems are down the street or on the other side of the world, these institutions are uniquely positioned to impact research, student success and community engagement because, by their nature, they are creative, innovative and forward-thinking.

This week, hundreds of university leaders and industry experts from around the world gathered at the Times Higher Education Young Universities Summit to talk about what makes young universities so dynamic. Held for the first time in North America at the University of South Florida, the three-day event provided a place to share insights and strategies into how to push forward. At the same time, they also discussed their challenges in competing against their older, more-established peers in areas like recruitment, development and brand awareness.

“As young universities, we are propelled by our desire to never be satisfied – to keep pushing our own limits,” USF System President Judy Genshaft said during the summit. “We set audacious goals, we break tradition and we write our own rules. I believe that’s what higher education is all about.”

The selection of USF to host this year’s global gathering of young universities was no accident. In its short 62 years, USF has transformed itself from a once well-respected regional university to a global research institution that’s changing the world and impacting the lives of tens-of-thousands of students.

Just this week, USF was ranked the fifth best public university in the U.S., founded between 1945 and 1967, by Times Higher Education. The Bulls also recently ranked fifth in new U.S. patents among all public universities and has continued to receive praise and accolades for its efforts to eliminate the achievement gap among minority students. “There’s this phenomenal energy and drive here at USF. You can see it right from the top in President Genshaft, and it permeates through the whole university,” said Phil Baty, Times Higher Education editorial director of global rankings. “There’s a real sense of belief, a real sense of being bold and agile – so, USF has really been the perfect host for this year’s Young Universities Summit.”

With more than 200 attendees, representing 41 nations and nearly 90 universities, the summit gave higher education leaders the opportunity to not just learn from their peers but to make valuable connections with one another – a major theme throughout the entire event. By building and maintaining these collaborative relationships, universities are able to make an even greater impact on the world and better serve their students.

“We must be global in nature to be of the greatest benefit to our students, our communities and our societies,” President Genshaft said during the summit. “The world is interconnected, and that contributes to deeper understanding and respect among cultures. As young universities, we’re focused on building bridges, not walls.”

While young universities may not have hundreds of years of storied history or worldwide name-recognition like some of their older peers – they are still pushing forward and paving their own paths; hungry to write their own histories, set their own traditions and build their own reputations.