President Steven C. Currall and his wife, Dr. Cheyenne Currall, discuss the path that led them to USF and share their excitement about continuing the University's upward trajectory.

Currall announces his first 100 days will include a listening tour

TAMPA, Fla. (July 1, 2019) – New University of South Florida President Steve Currall’s first week on the job was a busy one, featuring visits to all three USF campuses in Tampa, St. Petersburg and Sarasota-Manatee. He also toured the site of the new USF Health Morsani College of Medicine and Heart Institute building in downtown Tampa. Currall spent time with students, faculty members and regional business leaders as they begin to work together to sustain USF’s momentum as a thriving, preeminent research institution. 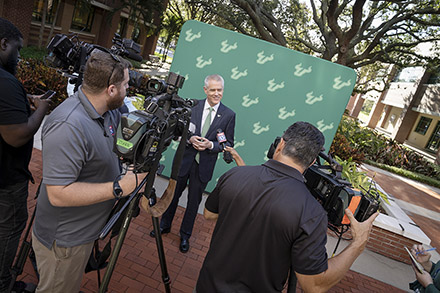 Dr. Steven C. Currall speaks with the media for the first time as USF President.

In addition to his initial visits, Currall says one of his first priorities will be to embark on a listening tour across each USF campus to hear ideas and identify strategic opportunities.  He announced the tour in a welcome message sent to all USF students, faculty, staff and alumni on his first day, expressing optimism for the university’s future.

“I am eager to get to know our community and hear ideas,” Currall said.  “The intent of my listening tour is to more deeply understand the unique features of the Tampa, St. Petersburg and Sarasota-Manatee campuses.  In two of my previous university leadership positions, I oversaw multiple campuses.  Thus, I fully comprehend the importance of understanding and promoting the differentiated features of each campus, how they contribute to their specific geographical regions, and how they can be aligned to advance the strategic vision of a unified university.”

Currall’s letter to the university community highlighted his goal for USF to continue its focus on positioning for membership in the Association of American Universities (AAU), an elite group of the top 62 institutions in North America. He also shared his vision for USF to evolve as an innovative engine that will power economic development, allowing the university to become to the Tampa Bay region what Stanford University has been to Silicon Valley.

“My singular objective during the remainder of my career will be to advance the trajectory of USF to become an overall top 25 public university in the United States,” Currall said.

Emphasizing the importance of fundraising, on his first day Currall announced the launch of a national search for a new senior vice president for advancement and CEO of the USF Foundation to replace Joel Momberg, who will retire in October.  USF is one of only three public universities in the United States founded since 1956 to raise $1 billion in a single campaign, which USF celebrated in 2017.