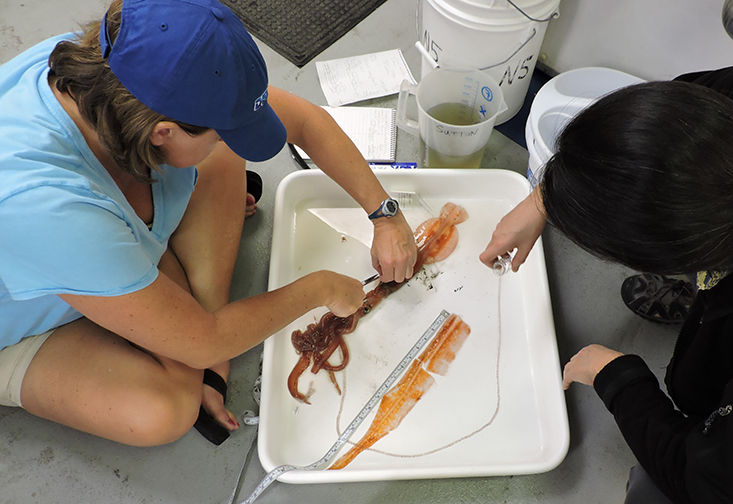 “We have only investigated five percent of the world’s oceans. There is 95 percent that still needs exploring,” said Judkins.

The 15-member science team will be out to sea June 7-23 conducting bioluminescence experiments and collecting rare and potentially new species from the deep ocean.

Bioluminescence is the light produced by living organisms using various mechanisms of chemical reactions. The team will examine if bioluminescence acts differently in organisms at depths of 2,000 meters when compared to their shallow-water relatives. The team will be investigating this phenomenon using crustaceans, fishes and cephalopods.

A variety of tools will be used to do so, including a remote operated vehicle that will travel to the sea floor to take images and record video, an illumination system with LED lights – dubbed “Eye in the Sea” – that will display different bioluminescent patterns to attract creatures towards it and a trawl net system that will collect live animals and bring them to the ship for onboard studies.

The research team, which was awarded a $565,000 NOAA Ocean Exploration Grant, will include scientists from Duke University, Nova Southeastern University and the Ocean Research and Conservation Association.

For Judkins, a cephalopod expert who will focus on identifying and understanding the bioluminescence properties of various octopus and squid, the research expedition will be her ninth time out to sea.

“I just love them, even as exhausting as these cruises are where you are working nonstop, sometimes as early as 2 a.m. or as late as 10 p.m.,” said Judkins. “I have done one to two a year since 2007, and I now get restless if I haven’t been out to sea.”

Some of her previous expeditions were part of the DEEPEND consortium funded by the Gulf of Mexico Research Initiative to study short- and long-term impacts of the 2010 Deepwater Horizon Oil Spill on marine life and ecosystems below 200 meters. This multi-year project collected data on contaminants from the spill and impacts on food webs to determine changes in the ecosystem and to marine life from the environmental disaster. Data and findings from these research trips are used by Judkins for publications and graduate student research.

In addition to the data collected, the out-to-sea experience provides valuable educational lessons that Judkins brings back to her students.

“It is one thing for me to tell students that I read in a book that this is how marine life act at a specific depth or how they move within a water column,” said Judkins. “But to bring back actual examples from these cruises, to share data and findings we collected, to get ideas from students about naming a new cephalopod species we discovered, it gets them so excited for the science.”