As NASA prepares to land on the Moon and build an International Space Station in the near future, more knowledge is needed to determine how the human body handles such an extreme environment. Csilla Ari D’Agostino, PhD, research assistant professor of neurosciences in the Department of Psychology at the University of South Florida (USF), was selected to join NASA’s next underwater mission to study what happens when one lives underwater for an extended period of time. She’ll serve on a four-woman crew, known as aquanauts, for the NASA Extreme Environment Mission Operation (NEEMO) 23, which simulates space exploration, especially focusing on future lunar missions.

For ten days, Ari will live in the Aquarius Reef Base, the world’s only undersea research station that replicates space mission conditions. It’s located 62 feet below the Atlantic Ocean in the Florida Keys National Marine Sanctuary, which is 4.5 miles off Islamorada. The aquanauts will study the potential challenges that come with living in such an extreme environment and test several emerging technologies inside the habitat and during simulated spacewalks, called extravehicular activities (EVAs). That includes testing tracking and augmented reality devices, space exercise equipment and tools for simulated rescue of incapacitated astronauts. They will also work with a scanning electron microscope that will be operated underwater for the first time and have several marine science objectives that focus on sponge and coral research, while simulating lunar geological exploration. In addition, Ari will run a series of tests to pinpoint the physiological and psychological changes that occur under such conditions. 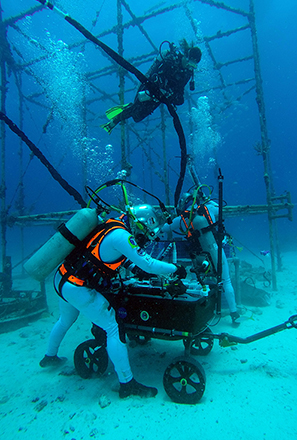 “In response to increased workload, a stressful environment in a confined space over an extended period of time can potentially lead to health issues and psychological problems,” said Ari. “In order to monitor these changes and in the future mitigate them with different interventions, we’ll run an extensive battery of tests on the crew, focusing on potential changes in cognitive function, stress, reaction time, working memory, team cognition, vision, taste perception, dexterity, muscle strength, microbiome, sleep quality, heart rate and body composition.”

The aquanauts will build on research conducted during NEEMO 22, when Ari’s husband, Dominic D’Agostino, PhD, associate professor of molecular pharmacology and physiology in the USF Health Morsani College of Medicine, served as member of an all-male crew. He will now assist with these experiments from Mission Control in Islamorada and also as a support diver. Ari served that same function for NEEMO 22, assisting aquanauts during simulated spacewalks on the ocean floor. Eight current and former USF students from the D’Agostinos’ respective departments will be part of NEEMO 23. Together, they hope to further our understanding of the potential changes that happen in females to help develop better countermeasures in the future.

“Our goal is to increase the safety, physical and mental performance, as well as neuroprotection effectively in both genders during undersea and deep space exploration missions,” said Ari.

During the expedition, Ari will also use a Remotely Operated Vehicle (ROV) as part of her National Geographic Open Explorer project. The ROV will be used to monitor the seafloor, collect plankton samples and detect marine fluorescence around the habitat. She was originally selected to use the ROV for her expertise in manta ray research leading the Manta Missions projects (www.mantamissions.org).

The other NEEMO 23 crew members are astronaut Samantha Cristoforetti from the Italian European Space Agency. She holds the record for the longest uninterrupted spaceflight of a European astronaut and until June 2017, held the record for the longest single space flight by a woman. The others are Jessica Watkins, PhD, NASA astronaut candidate, and Shirley Pomponi, PhD, marine biologist at Florida Atlantic University's Harbor Branch Oceanographic Institute. Two male habitat technicians will also be part of the expedition.

They will live underwater in the Aquarius habitat between June 10-19th.