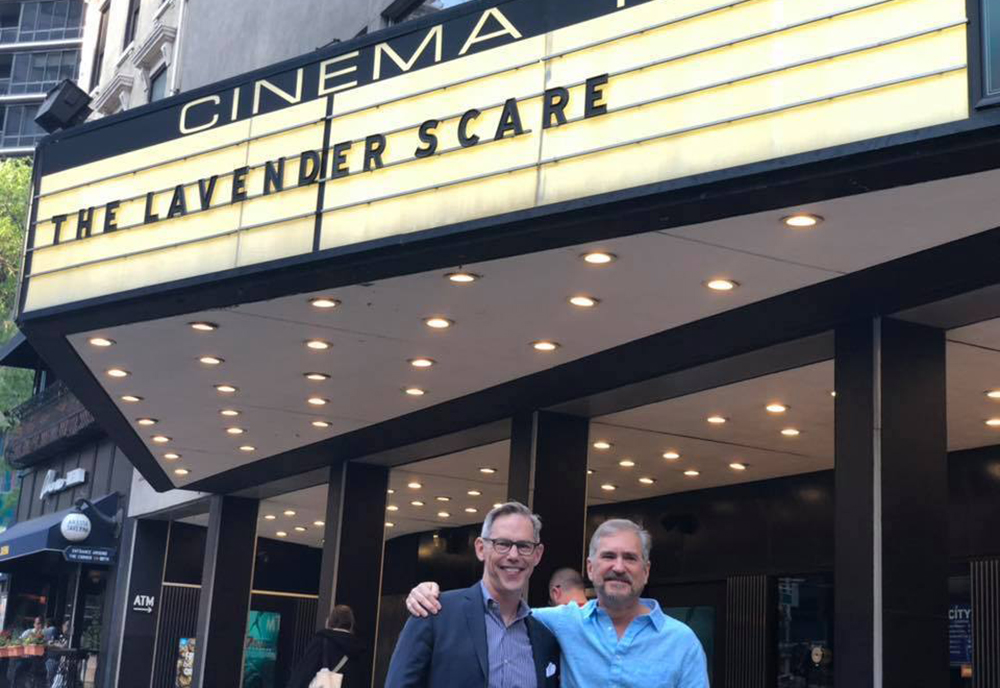 USF Professor David Johnson with film producer, Josh Howard, in front of a their theatrical release, The Lavender Scare

With three Hollywood stars lending their talents, an award-winning book by a University of South Florida history professor is hitting the big screen this month.

“It’s amazing. Millions of Americans are going to learn that the fear of gays and lesbians was central to Cold War American political culture,” said David Johnson, PhD, associate professor in USF’s Department of History.

The film, The Lavender Scare, is narrated by Glenn Close and voiced by Cynthia Nixon and David Hyde Pierce. It is currently screening in New York, Washington D.C., Los Angeles and Chicago, and will air on PBS June 18 as part of the network’s Pride celebrations.

Johnson’s research highlights the systematic investigations that led to the dismissal of thousands of alleged homosexual government workers from federal jobs.  The campaign, supported by an executive order signed by President Dwight D. Eisenhower in the 1950s, wasetter known as the McCarthy Era. It allowed for widespread and unsubstantiated accusations against federal workers thought to be sympathizing with political adversaries. The investigations were supported by an overall belief that homosexuality was immoral behavior and a threat to national security, making gays and lesbians susceptible to blackmail.

Johnson began his research in the 1990s, while he was a member of the Gay and Lesbian Activists Alliance in Washington D.C. During this time, he met Frank Kameny, a renowned leader in the gay rights movement and an astronomer who was fired in 1957. As many as 10,000 government employees were fired or quit, and an unknown number are thought to have committed suicide. Kameny appealed his case as a violation of his civil rights – one of the first based on sexual orientation.
“After meeting him, and discovering his attic full of materials, I saw this was an important story that needed to be told,” Johnson said.

Johnson focused on the firings in his dissertation at Northwestern University. For nearly ten years, Johnson meticulously filed Freedom of Information Act requests and scoured over documents, spending countless hours at the National Archives, which proved challenging.

“You can’t just go in, when there’s no index, and look up homosexuals,” he said. “You have to depend upon the knowledge and expertise of the archivists to help guide you and the first ones were not terribly receptive.” 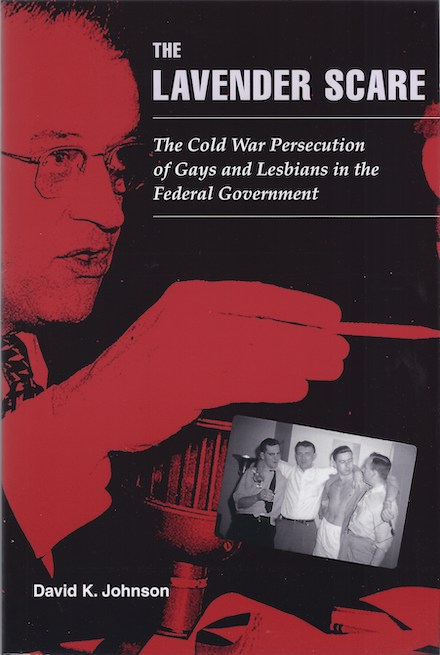 Thanks to an archivist who thought Johnson’s research was important, key documents were eventually located, including documents that no one had ever seen. The work was published in 2003 and later fell into the hands of Josh Howard, an Emmy-award winning producer at 60 Minutes who worked with Johnson to highlight the stories of those impacted by the purges.

The film is being released in time to mark the 50th anniversary of the pivotal Stonewall riots in New York. Government and public perception of the LGBTQ community has shifted significantly. In 1995, President Bill Clinton barred the federal government from withholding security clearances from homosexuals. In 2015, the Supreme Court struck down state bans on same-sex marriage. Recently, a bill was introduced in the U.S. Senate, the Lavender Offense Victim Exoneration Act, or LOVE Act, to address the U.S. State Department’s persecution of homosexuals publicly.

It’s been nearly 70 years since the untold story of the Lavender Scare began and two decades since Johnson began his documentation of this significant part of American history.

“Thanks to Josh Howard, research that was once just on my computer is now on the big screen for all to see,” Johnson said.

College of Arts and Sciences, Department of History