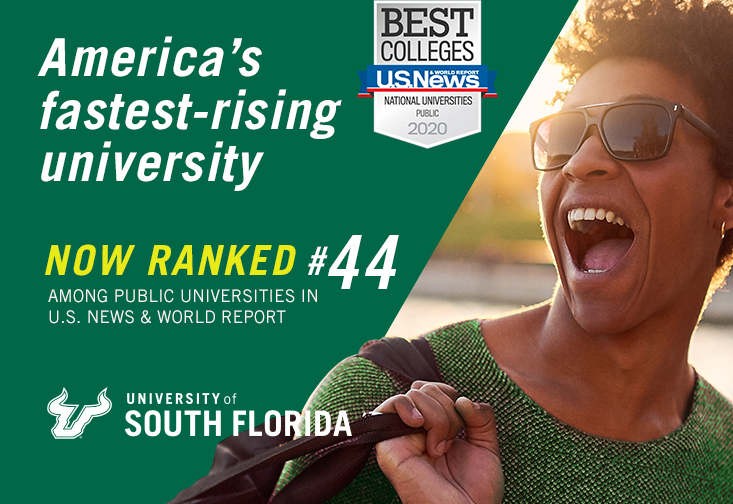 The University of South Florida is rapidly rising on the list of best public universities in America, now No. 44, according to new rankings released today by U.S. News and World Report. The No. 44 ranking is 14 spots higher than last year and represents USF’s highest position ever on the U.S. News list of best universities.

Since 2015, USF has climbed 44 spots from No. 88 to No. 44, an unparalleled trajectory among public or private universities in the United States.

“Our new ranking affirms USF’s position as one of the most promising universities in the nation. As USF is increasingly recognized as a destination for exceptionally talented students and faculty, it provides great benefits to the Tampa Bay region and the state of Florida,” said USF President Steve Currall. “We will continue our strategic focus on initiatives that will help propel USF to even greater heights in the future.”

USF’s ascent in the rankings coincides with record-breaking gains in student success. From 2008 to 2018, USF’s six-year graduation rate rose 25 percent, the largest increase of any public university in the country.

At No. 44, USF now ranks above, or stands tied with, six public members of the Association of American Universities (AAU), a prestigious group of the top 62 universities (36 public) in the U.S. and Canada that USF continues to position itself for future membership.

In this year’s rankings, U.S. News also measured universities for the first time on “social mobility,” which assesses an institution’s success enrolling, retaining and graduating students who come from families with lower incomes and receive federal Pell Grants. U.S. News ranks USF as the No. 9 public university in the nation in this important category.

“The University of South Florida takes great pride in the fact that we have closed the graduation rate gap among our students, regardless of race, ethnicity or socioeconomic status,” said Ralph Wilcox, USF provost and executive vice president. “This is a rare achievement in higher education and a reflection of our commitment to the success of students from all backgrounds.”

“This achievement is a result of the University of South Florida’s laser focus on strategic goals and the dedication of our students, faculty and staff,” said Jordan Zimmerman, chair of the USF Board of Trustees and a USF alumnus. “Our Preeminent university is performing at record-breaking levels, and I can’t wait to see what we can accomplish next.”

With today’s announcement, USF is now inside the top 50 of six different national rankings of the best public universities. USF is also one of only three Preeminent Research Universities in Florida, the state’s highest designation for universities.