USF and the Lightning Kick Off Another Season of Successful Partnerships 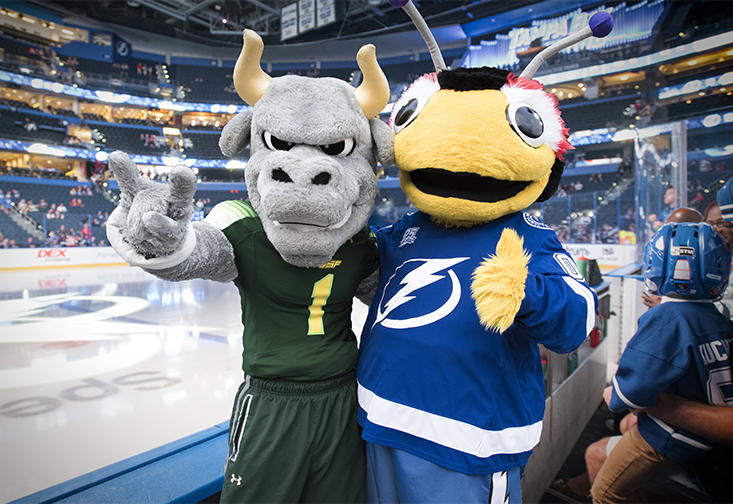 As the puck drops on the 2019-20 NHL season, the Tampa Bay Lightning are ready to build upon last year’s record setting 62-win year. The start of the season also brings with it a number of continuing partnership opportunities with the University of South Florida.

The relationship between the two has led to several high-profile projects, public outreach events and opportunities for USF students and the community including:

USF Health in Waterstreet Tampa
The USF Health Morsani College of Medicine and Heart Institute is moving in 2019, bringing approximately 1,800 students, faculty and staff to live, work and study along the downtown waterfront as a key anchor at Water Street Tampa. The USF Health Taneja College of Pharmacy will start classes there in fall 2021. By moving within a mile of its primary teaching hospital, Tampa General Hospital, USF will attract the brightest students and faculty, and will increase federal research dollars to fight heart disease.

Water Street Tampa is a new, mixed-use in downtown Tampa that will transform the city's core. The development project is led by Strategic Property Partners, a collaboration between Lightning owner Jeff Vinik and Cascade Investment.

Vinik Sport & Entertainment Management Program
From reimagining the waterfront to owning the Tampa Bay Lightning sports franchise, the Vinik name is synonymous with success. Since 2017, it has also officially linked with the University of South Florida, thanks to Jeff and Penny Vinik’s generous commitment to USF and ongoing support of a Muma College of Business program that the Vinik’s helped found.

“USF’s been a great partner of the Tampa Bay Lightning from the day I got here and probably before that,” said Lightning owner Jeff Vinik, who has played a crucial role in developing the relationship, both as the Lightning's owner and as a private philanthropist. “We’ve had so many things we’ve worked on together; whether it’s the sports management program at USF, the medical school coming downtown, entrepreneurial activity, we could go on and on. It is rooted in two organizations that have the same DNA, that have the same values – it’s integrity, hard work, achievement, respect and community. That’s the Lightning, that’s USF, and that’s why it’s been a perfect combination from day one.”

The fifth annual USF Presenting Night has been confirmed and will take place on Saturday February 8th, when the Lightning take on the New York Islanders. For more information stay tuned to USF's website and Twitter and Facebook.