When the University of South Florida announced plans that all classes would move to virtual learning, senior instructor of organic chemistry Solomon Weldegirma went straight to work. With over 1,000 students attending his lectures and labs, Weldegirma wanted to avoid any lapses in the semester. This meant taking on a new skillset: video production. Weldegirma chose eight teaching assistants (TA) to produce step-by-step videos on how to conduct his lab experiments. The files were then edited by USF’s Innovative Education team and posted onto Canvas.

“From a learning point of view, the video is there forever,” Weldegirma said. “All of the process is there for them to watch it again and again. And the more you see it, the more you grasp the concept.”

The videos allow for unlimited playback on the students' own schedules and offer individualized attention, as each step is explained. Lab experiments are typically taught in groups of 14. Students can also provide feedback on the online video course work in Canvas, helping Weldegirma and his TAs make improvements.

“It’s very different when you are videotaped versus when you are speaking real-time, you have to be really prepared so the students can clearly understand what you are saying,” Weldegirma said. 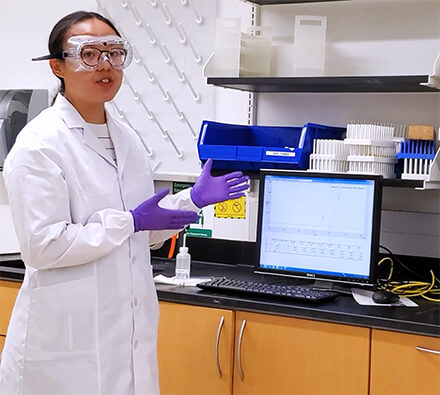 It takes a lot of planning in order to capture an experiment on camera. Some results appear rapidly, while other reactions can take as long as three hours to occur. It can be challenging to record inside labs surrounded by beakers and magnetic stirrers using a smartphone. But through careful scripting, angling and editing from USF’s Innovation Education team, the TA’s were able to make the experiments understandable and post them on Canvas.

“It was trying to get things that are usually done in a lab to work outside of a lab environment,” said Timothy Odom, one of Weldegirma’s graduate assistants. “It’s an educational experience all around both for the students and the TAs to think differently.”

Odom produced a video in a series of eight to show the Wittig reaction, an important method for the formation of alkenes, an essential precursor for materials used to make plastics, thermoplastic polymers, detergents and industrial compounds such as alcohols, solvents and cosmetics.

While students won’t physically enter the lab and mix the chemicals themselves for the rest of the semester, this platform provides a new opportunity for each student. They can now set their own pace and synthesize what they learned from each experiment into a report that fulfills the writing requirements expected from scientists.

College of Arts and Sciences, Coronavirus, Department of Chemistry