A new study provides substantial evidence that the first fossil feather ever to be discovered does belong to the iconic Archaeopteryx, a bird-like dinosaur named in Germany on this day in 1861. This debunks a recent theory that the fossil feather originated from a different species. 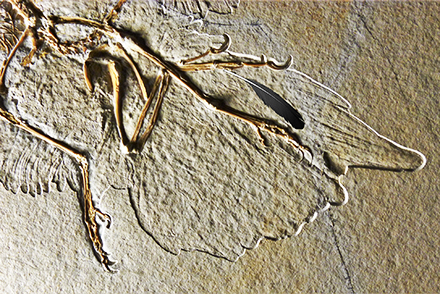 The research published in “Scientific Reports” finds that the Jurassic fossil matches a type of wing feather called a primary covert. Primary coverts overlay the primary feathers and help propel birds through the air. The international team of scientists led by the University of South Florida analyzed nine attributes of the feather, particularly the long quill, along with data from modern birds. They also examined the 13 known skeletal fossils of Archaeopteryx, three of which contain well-preserved primary coverts. The researchers discovered that the top surface of an Archaeopteryx wing has primary coverts that are identical to the isolated feather in size and shape. The isolated feather was also from the same fossil site as four skeletons of Archaeopteryx, confirming their findings.

“There’s been debate for the past 159 years as to whether or not this feather belongs to the same species as the Archaeopteryx skeletons, as well as where on the body it came from and its original color,” said lead author Ryan Carney, assistant professor of integrative biology at USF. “Through scientific detective work that combined new techniques with old fossils and literature, we were able to finally solve these centuries-old mysteries.”

Using a specialized type of electron microscope, the researchers determined that the feather came from the left wing. They also detected melanosomes, which are microscopic pigment structures. After refining their color reconstruction, they found that the feather was entirely matte black, not black and white as another study has claimed.

Carney’s expertise on Archaeopteryx and diseases led to the National Geographic Society naming him an “Emerging Explorer,” an honor that comes with a $10,000 grant for research and exploration. He also teaches a course at USF, called “Digital Dinosaurs.” Students digitize, animate and 3D-print fossils, providing valuable experience in paleontology and STEAM fields.