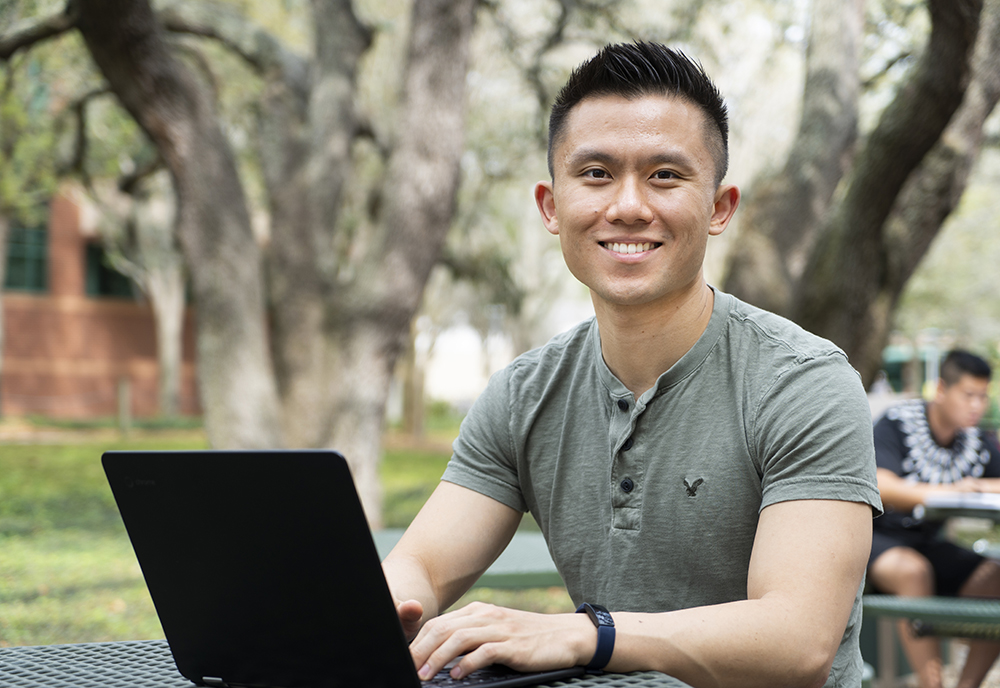 University of South Florida Judy Genshaft Honors College senior and Pure Mathematics major, Keller Blackwell, has been named a 2020 Knight-Hennessy Scholar. This award will fully fund his PhD in Computer Science at Stanford, one of the world’s top-ranked universities, and immerse him in a community of exceptional scholars. He is the first USF student to receive this honor and the only recipient among Florida colleges or universities this year.

The Knight-Hennessy Scholars Program seeks global leaders who can “out-think, out-work, and out-care” others. It offers a transformative experience comprised of opportunities for leadership development, mentorship, and immersive interdisciplinary experiential learning.

“I am honored to join such an elite group of graduate students prepared to improve the lives of others on a global scale,” Blackwell said.

A non-traditional transfer student from California, he spent many years working full-time in the restaurant industry before starting college. “I searched nationwide, and chose to come to USF because I saw a school that was climbing the rankings, securing an impressive number of high-impact patents, and producing cutting-edge research, all while being financially accessible,” Blackwell said.

Once at USF, Blackwell enrolled in a course with mathematics professor Thomas Bieske, who he credits with being “one of the most impactful people in my time at USF.” He adds, “One of the great things about coming to USF, where there is such great investment in student research, was that I was able to participate in the creation of new mathematical ideas.”

Blackwell will join a community of future global leaders at Stanford who share the goal of solving complex problems that will create positive change in the world. He sees this opportunity as the perfect way to further his goal of securing private data using cryptography.

“Cryptography protects the personal information that we store online,” Blackwell said. “While accomplished through mathematics, cryptography is a system implemented by humans to conceal language, embracing areas like linguistics and psychology. Knight-Hennessy is the perfect incubator for the next generation of cryptography that will protect us from threats present and in the future.”

Blackwell worked closely with USF’s Office of National Scholarships to apply for the Goldwater Scholarship, the most prestigious undergraduate award in the country for science research. In 2019 he was named a Goldwater Scholar and received funds to further his research and education at USF. Blackwell is set to graduate this May and begin his PhD program at Stanford in the fall.

“Keller’s work on improving cryptography, a continuing global challenge, is an outstanding accomplishment, and we are proud to see him continue his work at Stanford," Ralph Wilcox, USF    provost and executive vice president, said. "At USF, we value interdisciplinary collaboration and impactful research starting at the undergraduate level. Through engaging undergraduates in research, we develop citizen scholars equipped with skills for a global environment. The Knight-Hennessy Program houses devoted faculty mentors who foster the next generation of researchers and professionals, and I look forward to seeing more of our students join in the years to come.”

The Knight-Hennessy Scholars Program was created in 2016 through a $750 million endowment by Stanford alumnus Phil Knight, a philanthropist, American businessman and co-founder of Nike Inc., and numerous benefactors. The program is named for Knight and former Stanford President John Hennessy.