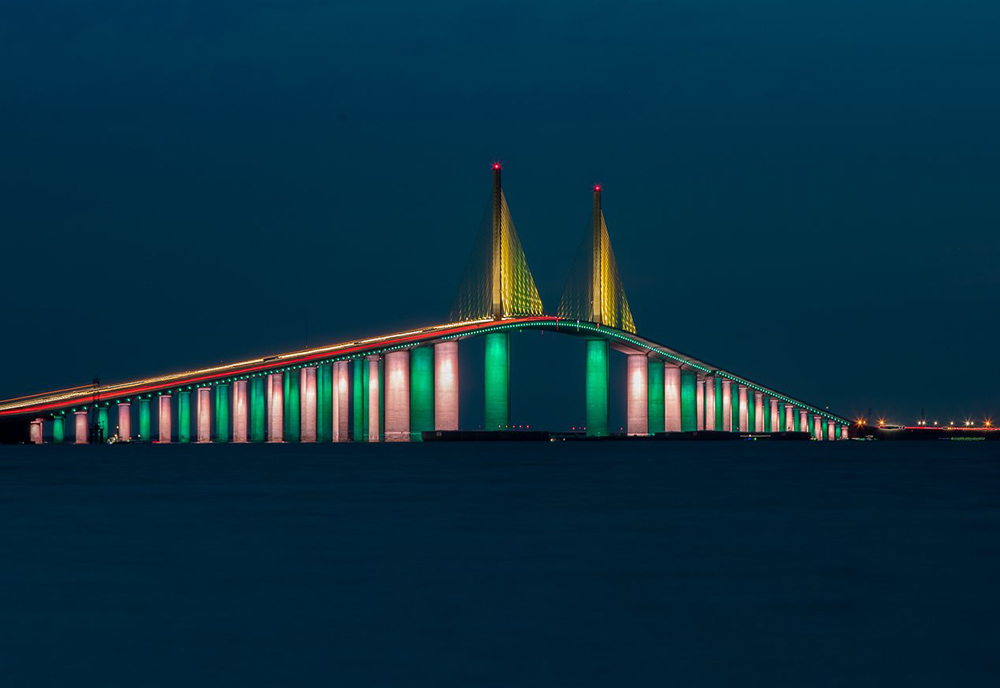 While the coronavirus epidemic may have halted the University of South Florida’s traditional commencement ceremonies, supporters from throughout the Tampa Bay region found creative ways to honor the spring graduating class of 2020.

The gestures will took a variety of forms, all intended to show encouragement to the nearly 7,500 students graduating from USF last weekend.

“Despite the challenges presented by COVID-19, the University of South Florida has worked diligently to maintain a strong sense of community and ensure our graduates can celebrate their accomplishments,” USF President Steven Currall said.  “Decorating many of Tampa Bay’s most recognizable landmarks is a terrific way for our region to share its support of our graduates.”

“I’m so proud of this year’s graduates, and I’m excited to salute them by lighting the Sunshine Skyway in green and gold in their honor,” Driscoll said. “I wish the graduates all the best as they cross the bridge of education and go on to successful careers.”

Several other structures throughout the area also honored graduates. In downtown Tampa, SunTrust Financial Centre lit up its ziggurat on top of the building in green and gold. In addition, Old City Hall, the trees in Curtis Hixon Park, bridges along the Riverwalk and USF Health’s Center for Advanced Medical Learning and Simulation (CAMLS) building all featured USF’s colors, as well as Tropicana Field in downtown St. Petersburg. The USF Water Tower on the Tampa campus also lit up in university colors.

The Tampa Bay Lightning also recognized USF graduates with congratulatory messages on all of the digital signage inside Amalie Arena. The team posted well wishes for the graduates on its social media accounts using the hashtag #USFgrad. In addition, the Glazer Children’s Museum in downtown Tampa projected a congratulatory message on the side of its building.

The city of St. Petersburg also donated space on six digital billboards on I-275 from Gandy Boulevard to 54th Ave. S. The billboards carried the message “We’re with you in spirit! Congratulations to the Class of 2020.”

The displays coincide with USF’s first-ever virtual commencement, which replaced the traditional, in-person ceremonies that were preempted by the coronavirus epidemic.