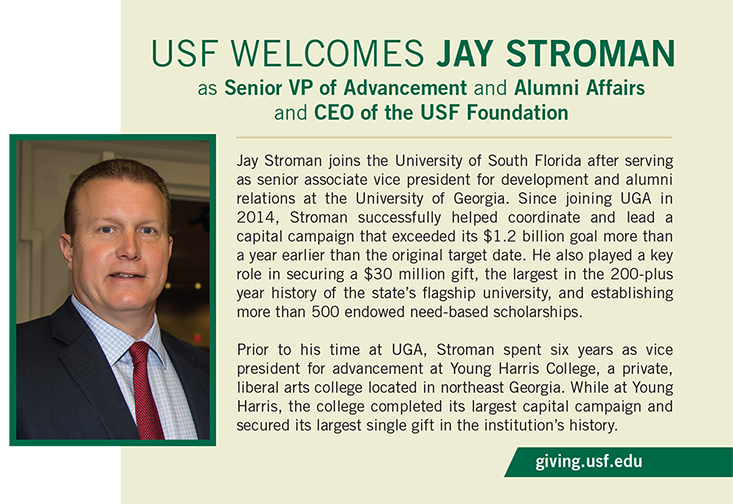 “As the University of South Florida advances as a globally recognized metropolitan research university, the support of our community has never been more important. Jay is a dynamic development leader who will build strong relationships with our alumni and community supporters, advocate for the university’s top priorities and develop creative strategies for sustainable philanthropy. His demonstrated track record of cultivating significant giving, as well as his enthusiasm for higher education makes him the perfect fit for our next chapter as a university,” Currall said. “I also want to thank the members of our search committee for their excellent job attracting a diverse and qualified pool of candidates, which resulted in this outstanding hire.” 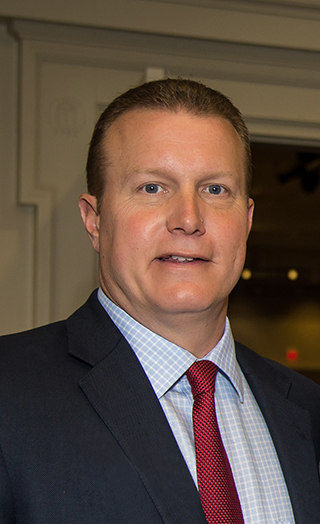 Since joining UGA in 2014, Stroman helped coordinate and lead a capital campaign that exceeded its $1.2 billion goal more than a year earlier than the original target date. He also played a key role in securing a $30 million gift, the largest in the 200-plus year history of the state’s flagship university, and establishing more than 500 endowed need-based scholarships. During his tenure, UGA increased its annual fundraising from $95 million to over $230 million, and increased the alumni participation rate from 9% to 14%. Stroman worked closely with UGA Athletics to implement new fundraising initiatives that resulted in raising more than $120 million for new athletic facilities in four years.

“I am truly honored to join the University of South Florida, one of the nation’s most promising and fastest-rising universities,” Stroman said. “Over the course of my career, I have gained a deep appreciation of the critical need for strong philanthropic support at a major research university. I am very excited by the opportunity to lead a successful advancement program and play a key role in collaborating across the institution to develop new strategic initiatives that benefit our students, faculty, staff, alumni and region.”

Prior to his time at UGA, Stroman spent six years as vice president for advancement at Young Harris College, a private, liberal arts college located in northeast Georgia. While at Young Harris, the college completed its largest capital campaign and secured its largest single gift in the institution’s history.

From 1999 to 2008, Stroman served in a variety of development and advancement leadership roles at Mercer University during a period when the university completed a $350 million capital campaign. He also spent five years as an assistant men’s basketball coach at Mercer.  Stroman earned a bachelor’s degree in management from Mercer in 1991. He and his wife, Tonya, have two daughters, Allie and Holly.

“I am thrilled we were able to recruit a candidate who is a perfect fit for USF,” said George Morgan, chair of the search committee. “Jay Stroman’s strong history of fundraising success, staff retention and talent development gives me great confidence that he will lead USF’s advancement program to the next level.”

Under Stroman’s leadership, USF seeks to build on recent fundraising achievements, which include receiving the university’s largest ever gift of $25 million in 2014 and becoming one of only three public universities in the United States founded since 1956 to raise $1 billion in a single campaign.

USA Today: Playoff plan provides a path for Major League Baseball to have fans in 2021