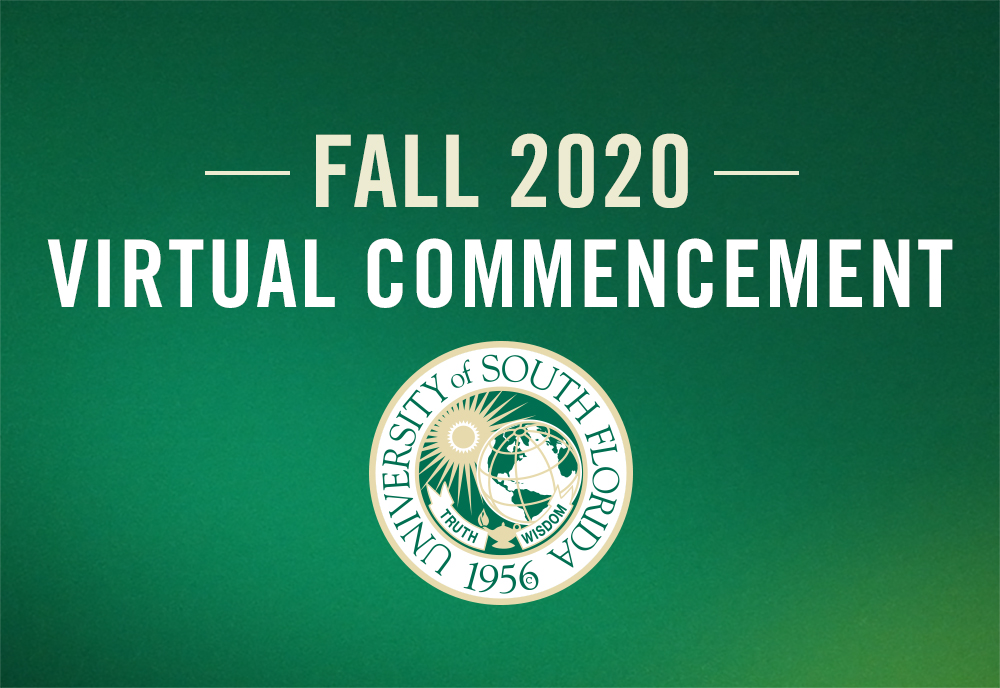 The University of South Florida will hold virtual commencement ceremonies for more than 5,000 graduates on Saturday, Dec. 12. This marks the third time USF has recognized students in this unique way due to the COVID-19 pandemic.

USF President Steven Currall will preside over all ceremonies, which will also include remarks from Provost Ralph Wilcox, student body president Claire Mitchell and college deans. In addition, the Outstanding Graduate Award winner and undergraduates who earned a 4.0 GPA will receive special recognition. The ceremonies will be available for viewing beginning at 9 a.m. on Dec. 12 through the USF commencement website.

The fall 2020 ceremonies will also provide an engaging opportunity for graduates, as they can submit a photo, video and written message to appear on screen during their ceremony.

Like spring and summer 2020 graduates, USF’s fall graduates have been invited to participate in a future, traditional in-person commencement ceremony when COVID-19 conditions allow for large gatherings to resume.

PhD in Computer Science and Engineering

Shamaria Engram is making USF history as the first Black woman to graduate with a doctorate in Computer Science and Engineering. It’s an accomplishment the Tampa native doesn’t take lightly and one she hopes will inspire other Black women to pursue their passions, no matter the field. Engram came to USF after completing her undergraduate degree at Bethune-Cookman University. She was drawn to the computer security work being done by USF Professor Jay Ligatti and has focused her studies on a theoretical and practical approach to unifying security policy enforcement. Engram has received a number of prestigious fellowships while at USF, including the National Science Foundation Florida-Georgia Louis Stokes Alliance for Minority Participation Bridge to the Doctorate Fellowship, the National Science Foundation Graduate Research Fellowship, the Florida Education Fund McKnight Doctoral Fellowship, the National GEM Consortium Fellowship and the BlackComputeHER Fellowship. She says she will always be grateful for the support and encouragement she received from the entire USF community. Looking forward, Engram has already accepted a position at the Massachusetts Institute of Technology’s Lincoln Laboratory. 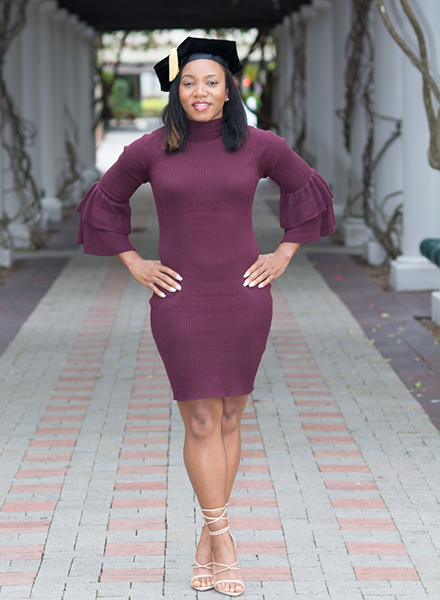 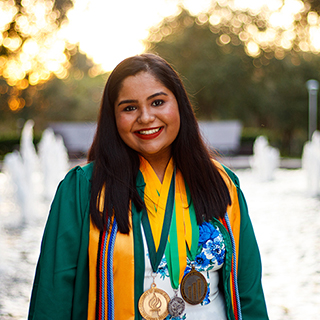 BS in Accounting & BS in Finance

By nearly every measure, Nandini Agarwal’s USF journey has been one of immense triumph and accomplishment. After emigrating from India just five years ago, Agarwal now graduates with dual bachelor’s degrees in accounting and finance and has been named USF’s Outstanding Graduate for the fall 2020 semester – another in a long list of accolades. Agarwal first decided on attending USF after gaining acceptance into the Judy Genshaft Honors College. As a full-time student, the Provost’s Scholar sought opportunities to apply herself both inside and outside the classroom. Along with balancing coursework and undergraduate research, the Muma College of Business student discovered her entrepreneurial spirit, starting a medical device company and a consulting firm aimed at helping Tampa Bay nonprofits during the pandemic. Agarwal is the recipient of the 2018 Golden Bull Award, the Genshaft/Greenbaum International Honors Study Scholarship and was named a 2020 Millennium Fellow. Her advice to other Bulls? Explore your passions and never be afraid to push the boundaries. 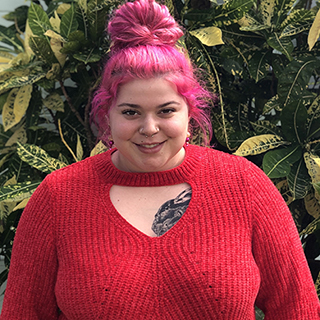 At 19 years old, Jourdan Rapaport is earning her USF diploma as this semester’s youngest graduate, taking the title by just one month. After attending St. Petersburg College’s Early College Program, Rapaport graduated from Osceola Fundamental High School just last year with her associate degree. She says it took a single visit to the USF St. Petersburg campus for her to realize it was where she wanted to study. Between the small class sizes, quality of the professors and the waterfront setting, the campus was exactly where Rapaport knew she would thrive. Along with her work as a registered behavioral technician at a local clinic, the psychology major took part in USF’s SafeZone Ally training, a program designed to educate participants on advocacy for the LGBTQ+ community. After graduation, Rapaport says she plans to take a semester off before applying to graduate school at USF. She aspires to one day become a board-certified behavior analyst, working to help those struggling with a variety of disorders. 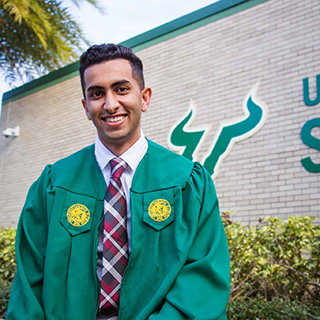 BS in Cell and Molecular Biology

When Ruhan Gagnani first arrived at USF in 2017, he felt alone. The cell and molecular biology major had picked up his life in India and moved around the world, to a place where he had no family, friends or connections. But as a new USF Bull, that feeling of isolation didn’t last long. Gagnani credits USF’s Orientation program with helping him successfully transition to a new school and new country, making lifelong friends in just his first weeks on campus. Since those first on-campus experiences, Gagnani has gone on to conduct undergraduate research and act as a STEM Academy Peer Mentor. During his second year as a Bull, Gagnani’s USF journey came full circle when he accepted a position as an Orientation Leader. He says the experience of helping more than 5,000 new students transition to the university is one that will stick with him forever. And while his undergraduate experience is coming to a close, Gagnani has already been accepted into USF’s master’s in Pharmaceutical Nanotechnology program. 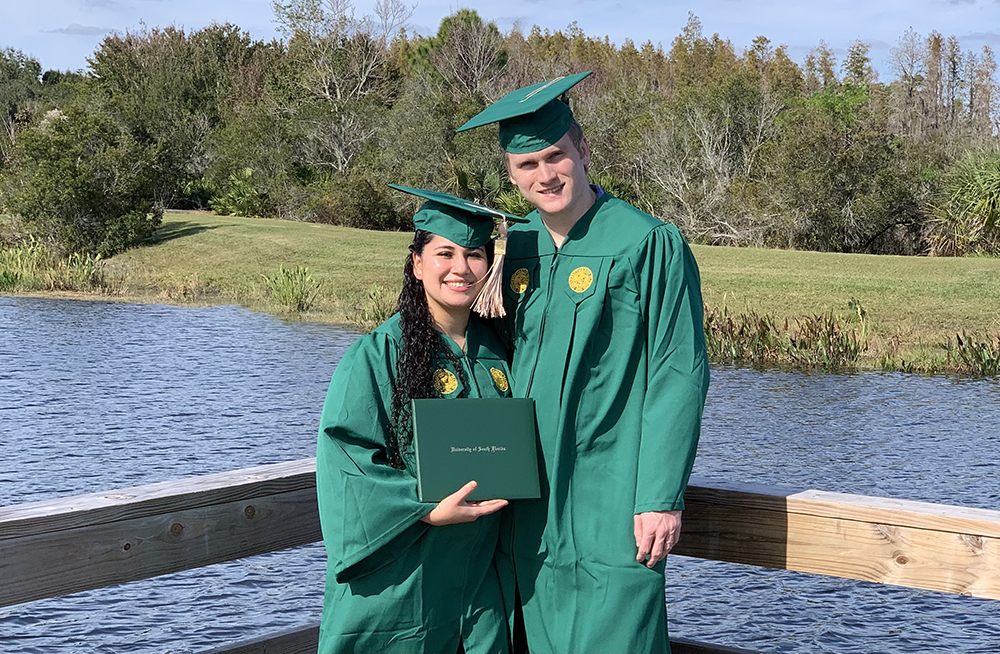 The path to a college education isn’t always straightforward. That was the experience of Michael and Jacqueline Ray, who began their long graduation journey eight years ago at different community colleges in different states. They met in high school and in the following years, they kept in touch as they pursued and earned associate in art degrees, Michael in Tampa and Jacqueline in Maryland. Michael attempted to get his bachelor’s degree, but says he didn’t take his academics seriously and dropped out. Jacqueline, who is from El Salvador, relocated back to the Tampa Bay area. They were both concerned about piling up student loan debt, so they took their time and saved money. While their paths toward an advanced degree meandered, their feelings for one another grew stronger. It would eventually lead to marriage. Soon after that momentous occasion, they decided to go back to school. Now, Michael and Jacqueline, 26 and 27 respectively, are graduating from the USF St. Petersburg campus as a married couple, each with a bachelor’s degree in finance. 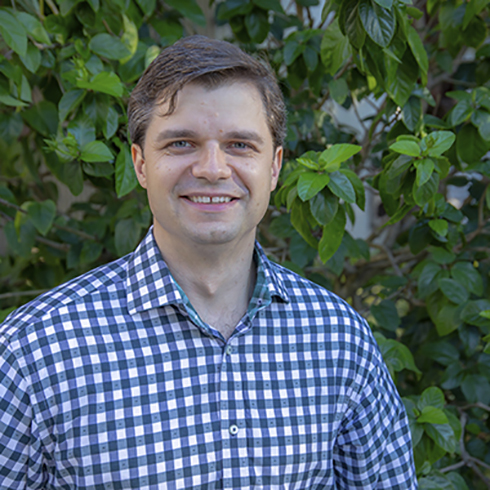 Born in Ukraine and trained at the world-renowned Bolshoi Ballet Academy in Moscow, Vladimir Lut dedicated himself to dance. He spent more than two decades training and performing around the world, eventually landing a character role in the Cirque du Soleil show, “La Nouba,” at Orlando’s Disney Springs. But after an injury to his foot forced him to retire from dance, Lut set out to find a new path. As a dancer, he spent years working with physical therapists to keep his body in stage-ready shape. With his background in performance and a desire to help others, he looked to pursue a new career in health care. Now, Lut is graduating from the USF College of Nursing’s accelerated second degree program and says he is excited to see what opportunities lie ahead. 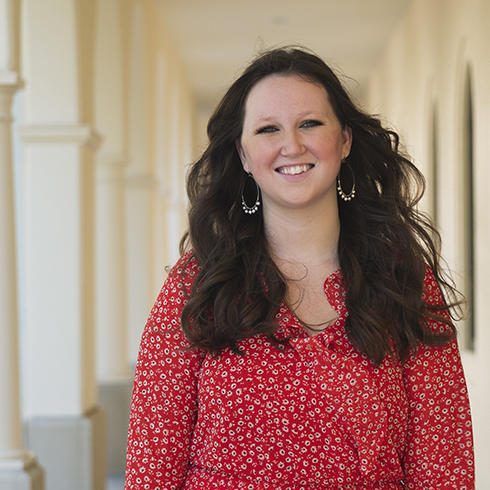 Becoming a teacher was the last thing Lauren Targaszewski had in mind as a young girl growing up in St. Petersburg and Sarasota. But the College of Education major had a change of heart by the time she reached high school thanks to inspiring teachers, including her mother, who spent her entire adult life as an elementary education teacher. Thanks to their guidance, Targaszewski grew to understand that teachers can have a profound and positive impact on young people. This enticed Targaszewski to consider teaching as her future life’s work, and after studying at the USF Sarasota-Manatee campus and interning at three local elementary schools, she became convinced she had made the right career choice. Now, this proud USF Bull is poised to graduate with a 3.97 GPA and looking forward to her first job: teaching second grade at the Bay Haven Elementary School in Sarasota.