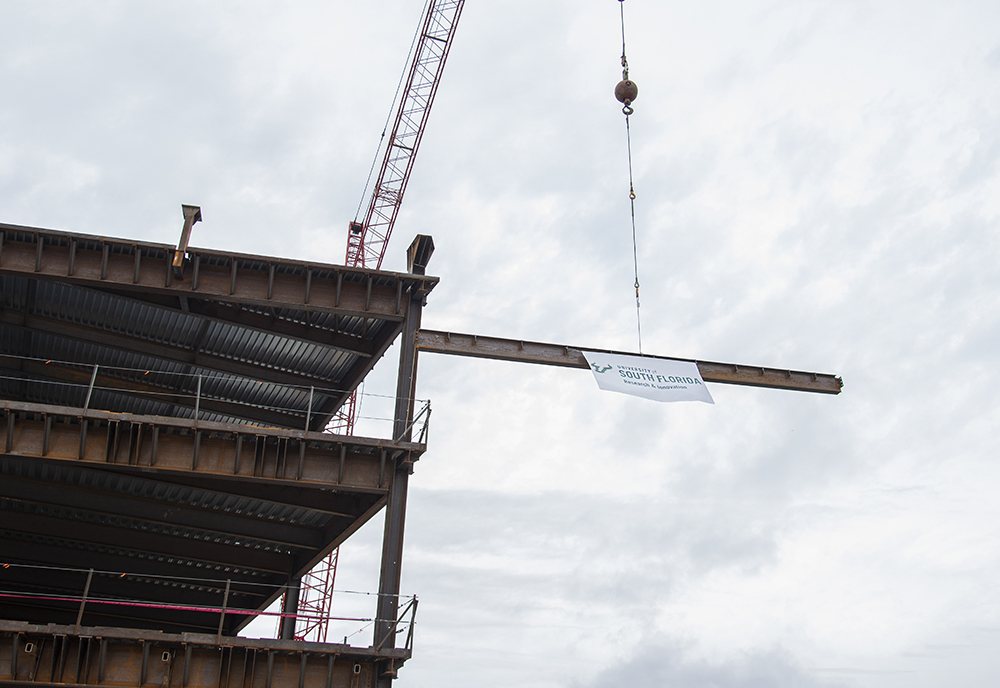 Since ancient times, the “topping off” of a new building has been an opportunity to celebrate both progress and the promise of new things to come. On Tuesday, construction crews gave the USF Research Park a new milestone to celebrate as they hoisted the last beam that will sit on the highest point of the new 120,000-square-foot building.

The pandemic did not delay progress on what is the first new building in the USF Research Park in more than a decade. The state-of-the-art mixed use lab and office building, with space for dining and retail on the first floor, remains on track to be completed by late 2021.

The final beam was lifted to the top of the structure, at the corner of Fowler Avenue and Spectrum Drive, after construction workers who have been laboring since summer on the structure left the signatures on the beam as part of the tradition. The beam was lifted into place by a crane operated by Sky Limit, the Orlando-based construction equipment company led by former USF linebacker Sam Barrington, who joined in the brief, informal celebration.

Located at the gateway to the USF Tampa campus, the three-story building will house facilities, office and meeting space for innovators and both established and startup companies, as well as retail and dining options.

The USF Research Park covers more than 112 acres on the north and south sides of Fowler Avenue, under the operation of the USF Research Foundation. USF’s incubator is currently home to more than 65 resident and affiliate companies and the USF Student Innovation Incubator’s dozens of student-led startups. More than half of the incubator companies focus on life sciences and nearly half are commercializing technologies developed by USF researchers. 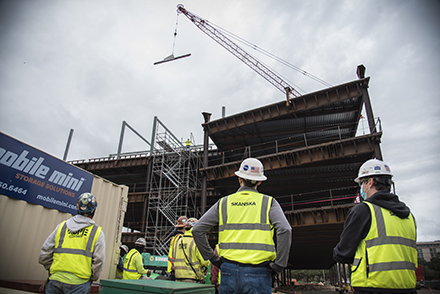 The USF Research Park buildings – which house startups launched by USF faculty and affiliated entrepreneurs, the famed art research institute GraphicStudio and the Florida Inventors Hall of Fame – have been consistently at full capacity in recent years.

The $42 million project is the work of a design/build team from Skanska and integrated architecture, planning and consulting firm Gensler, where USF School of Architecture alum Dawn Gunter led the team which developed the modern design.

The USF Research Park is at the heart of USF’s innovation enterprise, which a recent report from the Washington Economics Group said sustains more than 4,000 public and private sector jobs and returns more than $71 million in tax revenue to local, state and federal coffers. An estimated 1,992 people are directly employed in jobs created by the USF innovation enterprise, creating a $548 million annual economic impact statewide.