USF Esports will soon have a physical presence on the Tampa campus. Located inside the Recreation and Wellness Center, the 2,500-square-foot Esports Living Lab will feature 40 PCs and will be divided into spaces for casual gaming and watch parties, content creation and competitive gaming. With an estimated 500 million players and fans across the globe, competitive video gaming is fast becoming one of the world's most popular forms of recreation.

“Having a separate competitive space allows for fans to watch matches in person without being a distraction, but then imagine the players coming out after a big win and there’s all their friends,” said Antonio Gonzalez, assistant director of sports programs on the USF Tampa campus. 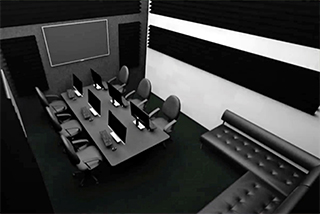 Initially advocated by leaders from the Video Game Club and Student Government, the USF Student Success unit formalized the program in 2020, providing it with resources and future funding opportunities through Student Government. Since its start, the program has grown from supporting just the Tampa campus to uniting students from all three campuses.

“Esports is an opportunity for us to bridge and build a community of not only competitive gamers and casual gamers, but people who are just generally interested in video games,” said Bart Stucker, coordinator of recreation and wellness programs on the USF Sarasota-Manatee campus.

The program has its own Discord server – a free communications platform that allows gamers to talk or text while playing. Student and staff moderators trained to manage conflict help to cultivate a friendly, safe and inclusive environment within the esports server.

“We inherit at the collegiate level this problem with sexist and racist behavior that is rampant within esports at times, and it’s our job to try and educate those members when they come into our space because they may not know better,” Gonzalez said. “In esports, there’s not a lot of structure like you see with traditional sports. There aren’t those mentorship opportunities like in Little League Baseball, that shape you up to know sportsmanship and have adult supervision that tries to guide that growth. At USF, we want to create a space that is reformative and allows students to grow and learn about themselves and others.” 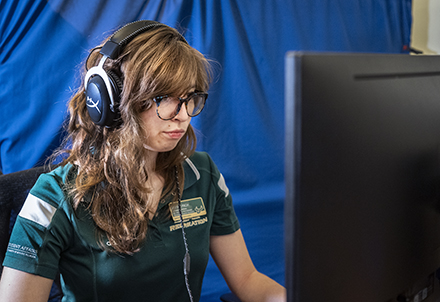 Sarah Lynch, marketing program assistant for sports programs on the Tampa campus and student moderator for the Esports program.

Sarah Lynch, a junior studying art history, transferred to USF when classes were conducted remotely due to the coronavirus. She found it difficult to meet others while living in Orlando and attending classes virtually. Lynch heard about USF Esports through word-of-mouth and was excited to finally meet other students who shared in her love of video games.

“USF Esports is an agent for change,” said Lynch, marketing program assistant for sports programs on the Tampa campus and student moderator for the Esports program. “This is one of the safest, most accepting environments I’ve ever found myself in.”

Another opportunity for esports members is the blossoming partnership with the Vinik Sports & Entertainment Management Program in the Muma College of Business. To keep business students ahead of the curve in this growing trend in esports, the first-ever class on the business of esports began last spring as a part of the program’s curriculum. Ranked as No. 3 in the world in 2021 by SportBusiness, the program hosts an annual Esports Summit featuring keynote presentations and discussions with top esports industry leaders and experts.

“We work with them to gather speakers and host events to showcase what esports is and bring that back to the community from a business standpoint, but also an educational standpoint,” Gonzalez said.

“By allowing us to recognize those individual game titles, we are able to provide students with more support and opportunities to compete in leagues, travel to tournaments and really focus on how they can build up their individual communities,” Gonzalez said.

In addition to casual game play, the program hosts intramurals and tournaments across several platforms including PlayStation, Xbox and PC, and broadcasts many of the team’s competitions live on its Twitch channel, a social media platform that allows audiences to watch games and interact with players in real time. Students can still be a part of the community even if they just want to watch and support the players.

These competitions go beyond facing off with fellow Bulls and allow members to take their university rivalries to a whole new level. The 2020 Battle for Florida FIFA20 Esports Tournament put USF head-to-head with Florida State University, University of Central Florida and University of Florida. The USF Esports 2020 Fall Invitational brought together students from 39 U.S. universities and one from Canada.

For gamers with access limited to an internet browser, USF Esports wants to make sure they’re included, too. Community game nights incorporate games outside of the console and PC-specific titles in order to include everyone in the fun.

“You don’t have to be good,” Gonzalez said. “It’s really that community-building that I think people miss out on when they only think about esports on a competitive side.”

Having a physical space on campus where students can access gaming equipment for free will  expand the program’s efforts to make esports more inclusive. In addition, the program plans to use the space to host events for the marginalized communities within esports, such as women and African Americans. “We want to be able to host events where people can see other people who they identify with and then build up that community,” Gonzalez said.

The USF Esports Living Lab is tentatively scheduled to open in the spring.