Hip surgery at the age of 13 gave Professor Lindsey (Les) Shaw his professional purpose in life.

During the procedure, surgeons unknowingly implanted two metal pins carrying Staphylococcus aureus, commonly known as “staph,” a unique bacterial pathogen that is among the tiniest and deadliest germs. It can cause infection in every part of the body and is responsible for medical conditions ranging from benign abscesses to systemic and life-threatening illnesses, such as pneumonia and septicemia.

The surgeons could not remove the pins.

“The problem with the infection on the pin is that it will never go away. You can take antibiotics, which will temper the infection, but the minute you take that away, it comes back,” said Shaw, professor and associate chair of USF’s Department of Cell Biology, Microbiology and Molecular Biology. “I’m trying to understand how something that is theoretically very simple – this tiny organism that we have to use microscopy to even see – can outsmart us and kill millions of people.”

For the past 20 years, it’s been Shaw’s mission to unravel its mysterious nature.

Antibiotics, such as penicillin, help treat staph infections. One of the most common causes of a staph infection is the drug-resistant Methicillin-resistant Staphylococcus aureus (MRSA). MRSA is commonly contracted in hospitals and can even infect healthy people through community spread. There have been reported outbreaks in athletic facilities, prisons and in schools. 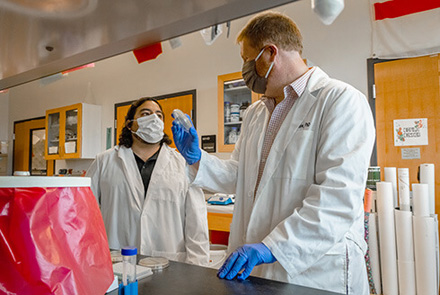 “The search for new treatments is crucial in our fight against a return to the pre-antibiotic era, where invasive S. aureus infections carried mortality rates of up to 90 percent,” Shaw added.

Shaw, who began his investigations as a patient, completed his undergraduate and graduate studies in England. He was later invited to the U.S. by a team of scientists he had worked with in Poland. Upon completing his fellowship, Shaw chose the University of South Florida as his academic home.

“I just saw opportunities and collaborations being so organic here at USF. Even now, I talk to my colleagues at universities with more prestige. They can’t get their chemists or other colleagues to talk to them. I just walk across the street,” Shaw said.

Since Shaw joined USF as a researcher in 2007, he’s discovered several systems within bacteria cells that have led to significant therapeutic developments for treating drug-resistant bacteria. He attributes his success to USF’s interdisciplinary and collegial community of scientists.

Shaw’s collaborative work with chemistry researchers has led to significant findings. One example is discovering Darwinolide, a compound extracted from a sea sponge from Antarctica by Bill Baker, a professor in the Department of Chemistry. Shaw tested the compound in one of his biofilm assays and discovered it successfully attacked the biofilm, the microorganism’s protective coat. 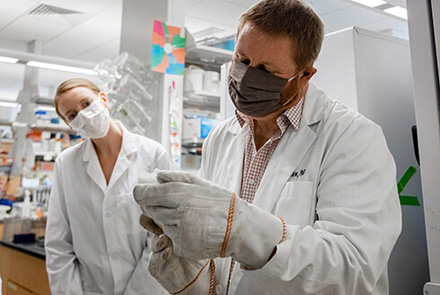 “These biofilms may be the state that all bacteria grow in. The problem with biofilms is that they are the cause of infection. The immune system can’t clear them, particularly if you have something implanted in you, like the pin in my hip, which had a biofilm of MRSA.” Shaw said. “It’s one of these big mysteries in microbiology.

Shaw’s goal is to learn everything about this ‘superbug’ and find multiple ways to stop it. Surrounded by his interdisciplinary colleagues, lab trainees and students, his investigations are constantly broadened. He runs an active lab of curious young scholars who often target areas of study that challenge Shaw’s strengths. One endeavor led him to co-invent an efflux pump inhibitor compound used to prevent antibiotic resistance and treat bacterial infection. He now reviews efflux pump grants for the National Institutes for Health.

Mentoring and training the next generation of scientists is essential for Shaw. He fosters a family like environment to support students throughout their growth. Also, he gives them the freedom to pursue their individual interests. As they develop their ideas, Shaw either cheers his students on or challenges them to keep looking. In the 14 years since the opening of his lab, Shaw now has a “family tree of scientists” with graduates working as senior members of the CDC, the microbiology industry or in their own academic tenures.

Shaw’s position, where he gets to lead a lab of talented researchers within his study area, is an opportunity to simultaneously pursue multiple investigations. Technology is paramount in his lab, especially with the advances in understanding the microbiome, which means that bacteria don’t exist in isolation but rather in diverse microorganism communities. He uses omic technology, which gives scientists the ability for scientists to study every DNA, RNA or protein in a cell at the same time, rather than using old school, one-at-a-time approaches. Shaw sees these recordings of big data as the next frontier in his quest to unlock genetics and mechanisms of bacterial pathogens and someday find a way to kill them.

“I consider this to be the greatest job. I never want to do anything else because I love puzzles and problem solving, and there’s also this translational angle of helping people,” Shaw said.