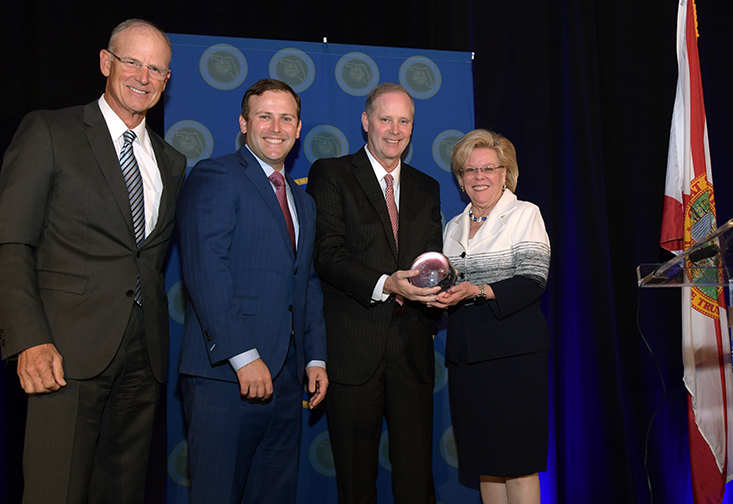 Rhea Law, interim president of the University of South Florida (USF), was honored with the Governor’s Business Leader of the Year Award at the Fall Meeting of the Florida Council of 100.  The Governor’s Business Leader Award honors a Florida business leader who is a model leader for the state and has excelled in business, civic and philanthropic endeavors. Each year, the governor and the Florida Council of 100 select the recipient based on their significant contribution and service towards the stewardship of the state.

“Rhea Law represents the best of Florida,” Syd Kitson, chairman of the Florida Council of 100, said. “She has brought a servant mindset to every aspect of her life - as a dedicated lawyer and businesswoman, a committed public servant to our state and now as interim president of USF. Congrats, Rhea. This honor is well deserved.”

Prior to being named interim president of USF in 2021, Law led a distinguished career in law, business and public service.  She is the former chief executive officer and chair of the board of Fowler White Boggs and led the 2014 merger of Fowler and Buchanan Ingersoll & Rooney. Law has established ties to USF as an alumna, founding member of the Board of Directors of the USF Law Alumni Society, and as a member of the USF Research Foundation Board, among several other contributions to the university. In 2018, she was named Distinguished Alumna by the USF Alumni Association.  That same year she was also inducted as an honorary member of the USF Chapter of the National Academy of Inventors in recognition of her support of research and innovation at USF. Law was granted an Honorary Doctor of Medicine Degree in 2013 from the USF Morsani College of Medicine.  She is one of the founding members of the USF Board of Trustees, where she spent five years as vice chair and four years as the first and only female chair, contributing significantly to USF’s growth and evolution as a Research 1 public university.

“It is a privilege to work alongside Rhea Law to help steward the state of Florida,” Bob Ward, CEO of the Florida Council of 100, said. “Rhea has been a fierce advocate for the business community and the people of Florida.  We are a better state because of her tireless efforts.”

Law is known for her civic and philanthropic efforts across the state and particularly in Tampa Bay, where she served on the boards of the Tampa Bay Technology Forum and the H. Lee Moffitt Cancer Center and Research Institute. She also chaired the Tampa Bay Chamber of Commerce and Tampa Bay Economic Development Council, and the Tampa Bay Partnership.

She was the first honorary commander of the 6th Air Mobility Wing at MacDill Air Force Base. Law was also previously the chair of the Florida Council of 100, where she currently serves on the Executive Committee and chairs the Economic Competitiveness Committee.

“I am humbled and immensely grateful to receive this deeply meaningful award.  It has always been an honor to serve and to help lead the Florida Council of 100, an impactful organization focused on improving the quality of life and economic well-being of every Floridian,” Law said.

“The timing of this recognition is perfect, as I’ve been entrusted to lead the University of South Florida, an institution that shares a similar mission of driving economic growth and enhancing the future for the Tampa Bay region and state of Florida.”

The Florida Council of 100 is a private, nonprofit, nonpartisan organization of business leaders, which exists to promote the economic growth of Florida and improve the economic well-being and quality of life of its citizenry.  Representing more than 140 companies and more than 1.3 million employees, Council members have achieved a high degree of success and recognition in their business or profession; have demonstrated involvement in Florida public policy issues; and possess the personal qualities of character, personality and leadership ability.