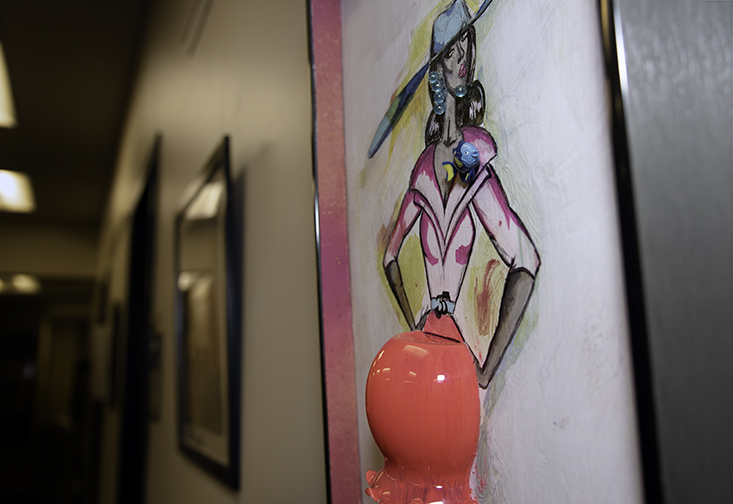 The “Visibility & Remembrance: Standing with the Trans* Community” international art exhibit seeks to combat the exclusion and erasure of transgender people from society, while remembering the community’s courage and resilience shown in the face of systems of oppression. Open to the public, the exhibit can be viewed online or by appointment in the USF College of Arts and Sciences Multidisciplinary Complex (CMC) on the Tampa campus.

Curated by the USF Department of Women’s and Gender Studies and its associated alumni group, 31 submissions from around the world were selected, showcasing diverse perspectives and experiences through two- and three-dimensional art, film and poetry. Trans, nonbinary and ally artists representing Canada, France, Germany, India, Nigeria, Poland, Switzerland, the United States and the United Kingdom, reflect on the experiences, representations, identities and politics of being trans.

“We believe in the power of art to affect social discourse,” said project coordinator Sarah Jünke.  “The last few years have seen an escalation in misinformation and attacks against the rights of people who are transgender, and we hope that the exhibit can help to change this. Through the voices in this exhibit, we hope to make the experiences of people who are trans more visible and to foster solidarity between trans people and allies.”

Lee Pearson, fourth-year studio art and Chinese language double-major, is one of five USF students whose work is featured in the exhibit. Pearson came out as trans in their early teens, but said they were surrounded by the high pressure for gender conformity and due to fear, disconnected from their trans identity until two years ago. Pearson is now actively pursuing their identity and beginning transition, but is still faced with challenges like their many other gender non-conforming peers.

“We have very little precedent for living the trans identity with so much of the public eye upon us,” Pearson said. “The future is almost entirely uncharted, and very few of us know how to continue. If by some miracle we manage to escape the gender binary, there is still the constant need from others to categorize and understand, to organize the trans existence and box it into something palatable, coherent, likable.” 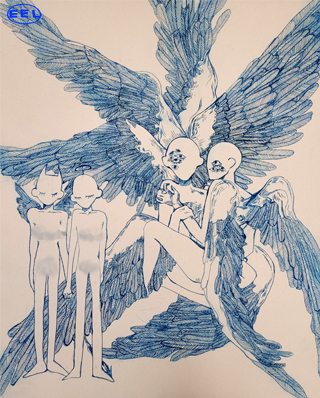 SUMMER WAR (I) was censored for this story. Photo: Lee Pearson.

Pearson’s exhibited piece, SUMMER WAR (I), is part of a series of prints inspired by their re-introduction into the world as outwardly androgynous. The artwork explores, “easily-recognizable archetypes that have been whittled down to more palatable, consumable language that we speak in today — for example, the transformation of the Judeo-Christian angel from its conception, compared to how we understand images of it now,” Pearson said. “The perception we assign to others in relation to ourselves can be extremely valuable, and it can also easily be weaponized. Over time, that perception becomes an object, able to be manipulated; one day, the perception may replace you.”

SUMMER WAR (I) was made using the intaglio printmaking technique called drypoint etching, in which the artist uses a specific type of needle to carve into a surface, such as a copper plate, rubs ink into the carvings and then prints onto paper with a press.

The exhibit runs through April 1 to honor Transgender Day of Remembrance on Nov. 20 and Transgender Day of Visibility on March 31. Visitation hours are by appointment only until the spring. Throughout the duration of the art exhibit, supporting events will be added to reinforce and expand on the same themes and topics.

College of Arts and Sciences, Department of Women's and Gender Studies, MyUSF