The Florida Board of Governors (BOG) today voted unanimously to confirm Rhea Law as the University of South Florida’s next president. 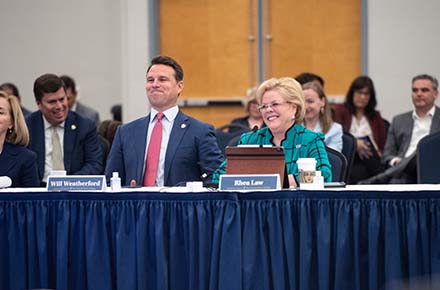 Law, who was selected unanimously by the USF Board of Trustees (BOT) last week, is the first USF alum to fill the role.

Law has served as USF’s interim president since August.  Under her leadership, the university recently experienced the most transformational legislative session in USF history, with record-setting investments in operations on all three USF campuses. She also led the effort to complete USF’s new five-year strategic plan, created a collaborative working group to develop a more transparent budget model and has fostered greater communication and collaboration across campuses.

“Rhea Law has worked tirelessly for many years to advocate for the University of South Florida and strengthen the entire Tampa Bay region through her commitment to civic engagement and public service,” BOG Chair Brian Lamb said.  “Rhea is a proven leader who will continue USF’s trajectory of excellence.”

Law has the rare distinction nationally of becoming president after previously serving as chair of the board of trustees, working at the university as a staff member and being a student, giving her a unique perspective. In a university-wide message sent today, Law shared more of her vision and some of her priorities, while pledging to continue working closely with the community to shape USF’s next chapter. 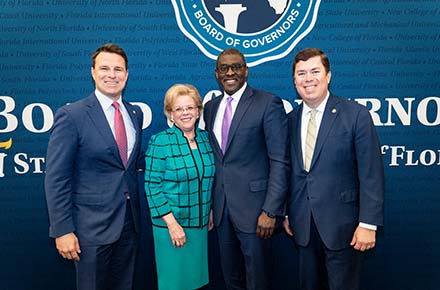 "Today's confirmation by the Board of Governors is a recognition of the University of South Florida’s tremendous momentum," Law said. "I am continuously inspired by the dedication of our students, faculty, staff, alumni and others within our community to shaping a better world and changing lives.  It’s their passion, commitment and talent that will make the next era for USF our finest yet.”

Law is the former chief executive officer and chair of the board of Fowler White Boggs, a Florida law firm. She led the merger of Fowler with a national firm, Buchanan Ingersoll & Rooney, in 2014. She is one of the founding members of the USF Board of Trustees, where she spent five years as vice chair and four years as the first and only female chair.

She is also a founding member of the Board of Directors of the USF Law Alumni Society, served as a member of the USF Research Foundation Board and was named a 2018 Distinguished Alumna by the USF Alumni Association. Law has served on numerous other boards across the Tampa Bay area.

Her full resume is available here.

After her selection by the BOT last week, Chair Will Weatherford wrote a letter to the university community highlighting Law’s performance as interim president, deep connections to USF and decades of valuable experience in support of elevating the Tampa Bay region.

Board of Governors, Board of Trustees, Brian Lamb, President Rhea Law, Rhea Law, Will Weatherford