The University of South Florida Board of Trustees (BOT) today voted unanimously to name Rhea Law as the university’s president-elect.

Law, who has been USF’s interim president since August, will become the university’s eighth president and the first USF alum to fill the role, pending confirmation by the Florida Board of Governors (BOG) next week. 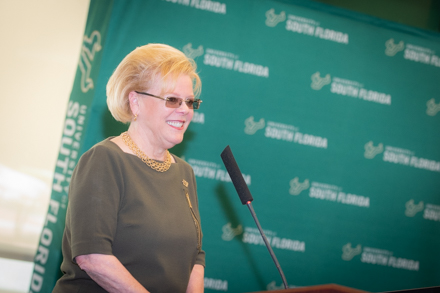 “Over the last seven months serving as interim president, I have been inspired and energized by the unwavering commitment of our University of South Florida community. Our faculty, staff, students and supporters have a passion for making a difference and changing the world, and it is this passion that will take USF to its greatest chapter yet,” Law said. “This is more than a job for me. It is a calling to give back to this community that has given so much to me. When we link arms and work together, anything is possible.”

Under Law’s leadership, USF recently experienced the most transformational legislative session in the university’s history, with record-setting investments in operations on all three campuses. She also led the effort to complete USF’s new five-year strategic plan, created a collaborative working group to develop a more transparent budget model and has fostered greater communication and collaboration across all USF campuses.

USF BOT Chair Will Weatherford shared his thoughts on the new president-elect in a letter to the university community, highlighting Law’s performance as interim president, unique connections to USF and decades of valuable experience in support of elevating the Tampa Bay region. 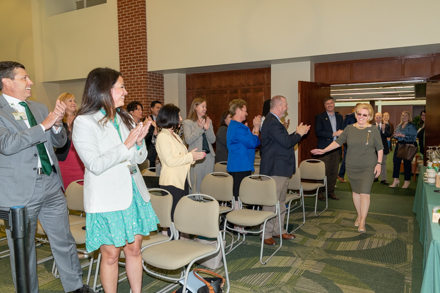 “Rhea Law is the right leader at the right time for the University of South Florida.  From her time as a student, to becoming a staff member, to later serving as chair of the Board of Trustees, she has contributed to the university’s success from nearly every vantage point, and brings an unrivaled, comprehensive perspective on USF’s trajectory.  It would be hard to find anyone with a deeper passion and love for USF than Rhea Law,” Weatherford said.  “We have the utmost confidence in Rhea, and I can’t wait to see how far we can take USF under her leadership. Our best days are ahead of us.”

Law’s selection comes after a seven-month thorough national search process, which included a significant amount of community engagement. Approximately 2,000 respondents participated in an online survey to gather feedback on specific qualities they’d like to see in a new president. In addition, hundreds of students, faculty and staff participated in town hall meetings. This eventually led to candidate interviews and visits on all three campuses.

The president-elect requires approval by the BOG, which oversees Florida’s 12 public universities. The BOG is currently scheduled to conduct a public interview and hold a confirmation vote on Wednesday, March 30, during a meeting in Jacksonville. 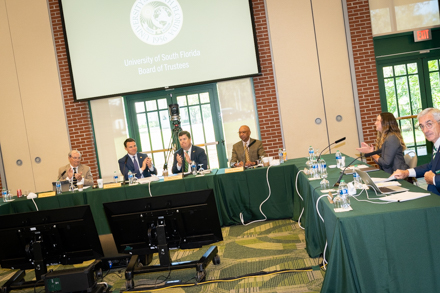 “From the beginning of our search, we pledged to prioritize community input and engagement.  As the process progressed, we continued to listen to feedback and it consistently led us to Rhea Law,” said Mike Griffin, who served as chair of the USF Presidential Search Committee.  “In addition to her decades of experience dedicated to elevating the University of South Florida and the Tampa Bay region, over the past seven months serving as interim president, Rhea has shown the leadership qualities to bring our community together, build on our history and carry out a vision for even greater success in the future.  Rhea Law has earned the opportunity to be our next president and I can’t think of a better leader to take us forward.”

A USF alumna, Law is the former chief executive officer and chair of the board of Fowler White Boggs, a Florida law firm. She led the merger of Fowler with a national firm, Buchanan Ingersoll & Rooney, in 2014. She is one of the founding members of the USF Board of Trustees, where she spent five years as vice chair and four years as the first and only female chair.

Her full resume is available here.

Board of Trustees, MyUSF, Presidential Search