The University of South Florida’s longest-serving member of the Board of Trustees (BOT), whose historic time on the board started when it was formed in 2001, has ended his tenure with the announcement of a $1.1 million gift to support his alma mater. 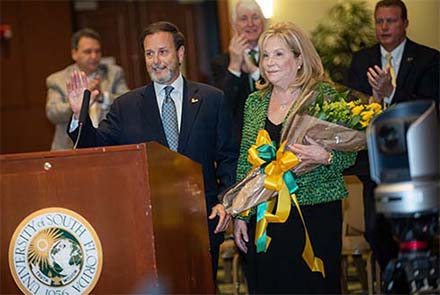 During a special presentation to honor him at the March 8 BOT meeting, John Ramil revealed that he’ll donate $1 million to endow the chair of the Department of Medical Engineering and $100,000 to support the Judy Genshaft Honors College. Over the years, Ramil and his wife Naida have made several significant contributions to the university, including to the USF College of Engineering, from which John earned his bachelor’s and master’s degrees.

“One of the missions that we support is helping people in communities achieve better health and what the university has done to create a unique Department of Medical Engineering, governed by both the medical school and the engineering school, is a place where engineering, innovation and medicine come together to improve people's lives,” Ramil said. 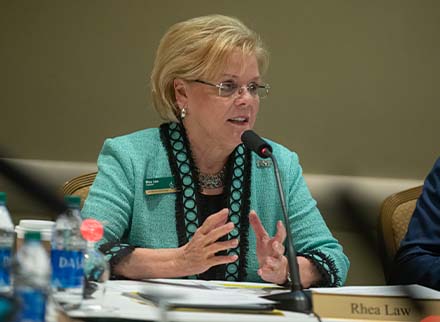 In honor of his service to USF, the courtyard of the Sam & Martha Gibbons Alumni Center will be named the John and Naida Ramil Courtyard. President Rhea Law presented the Ramils with an original watercolor painting of the courtyard.

“Not only has he been a stalwart here for at the University of South Florida, he’s been the same for the city of Tampa, the state of Florida and beyond,” Law said. “I look back to our inaugural Board of Trustees and the pleasure that it was to serve with him, the thought process that went into focusing on how we can move the university forward. That was the start of the trajectory that we’re enjoying today, and it all comes from good leadership at the very beginning.”

“John Ramil has been an incredible leader, stalwart, alumni, person of incredible character and just a voice of reason and strength for this board for 20 years since its inception,” said Chair Will Weatherford.

Ramil is the retired president and chief executive officer of TECO Energy. In addition to serving on the BOT, he held the role of board chair from 2010-2014. Ramil has also been a director on the USF Foundation Board, the USF Alumni Board, the USF Engineering College Advisory Board and the Gus Stavros Center for Free Enterprise Education Advocacy Board. Ramil was named a USF distinguished alumnus in 1999, he was awarded an honorary doctorate of engineering from USF in 2016 and he has also received the President's Fellow Medallion.

It’s believed Ramil is the longest-serving trustee in the state of Florida.