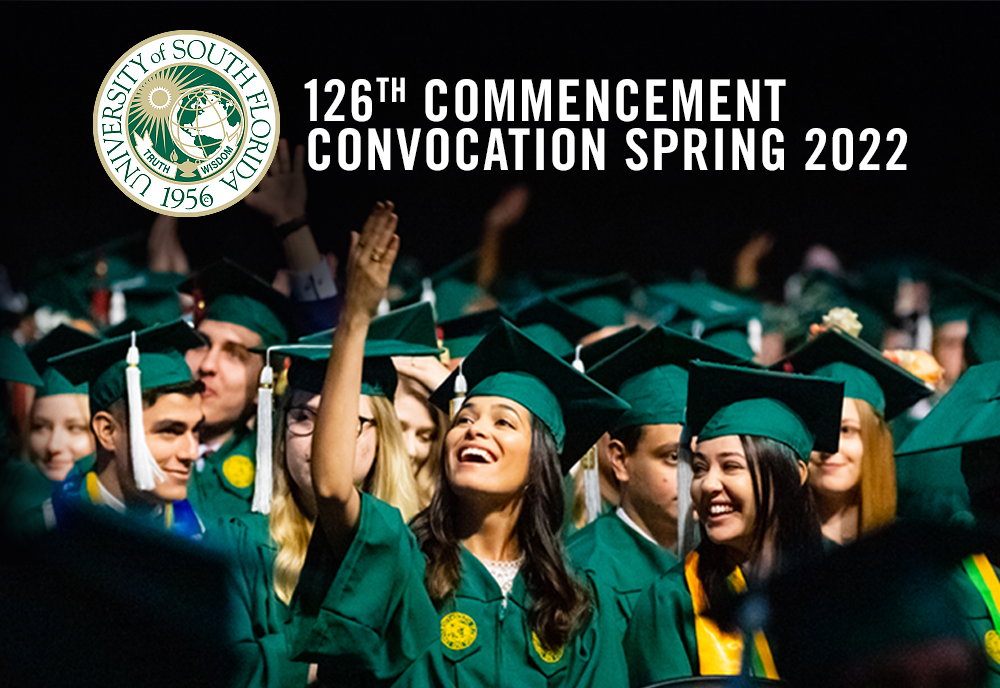 The University of South Florida awarded more than 6,400 degrees during spring commencement. The ceremonies included recipients of approximately 4,843 undergraduate, 1,295 master’s and 297 doctoral degrees.

In 2015, Tyra Brown suffered a traumatic brain injury from a car accident and had to relearn everything from breathing to walking and eating. Once she recovered, Brown challenged herself further by adding writing and studying to her list. Led by her spirit and determination to make a difference in the community, Brown decided to pursue a degree that would lead to a career in social work. She’s most satisfied with outreach work and takes pride in doing everything possible to help whoever is in need. Brown interned at Camelot Community Care, working with teens aging out of foster care. She will pursue a career working with the elderly and continue to learn from their wisdom. 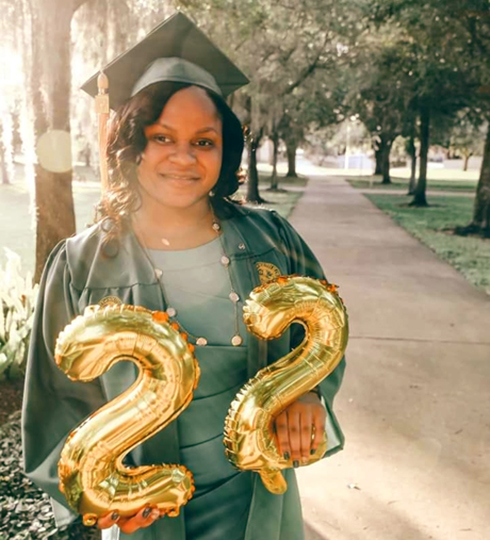 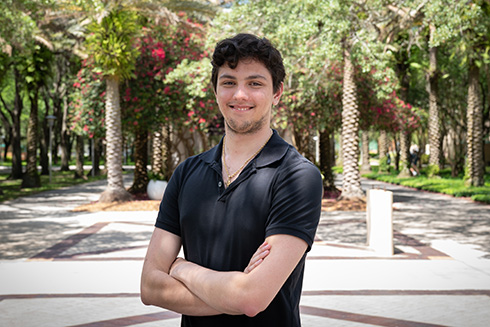 Alexander Mercier
BA in Mathematics and BS in Microbiology

Alexander Mercier is the recipient of this year’s Outstanding Graduate Award. Mercier made USF history as the first Rhodes Scholarship Finalist for his academic achievements and well-rounded interests. As a student in the Judy Genshaft Honors College, Mercier’s skillset is notable. He is a talented visual artist and pianist. He believes art and math are great conceptual partners because creativity is necessary to know how to apply math. He was impressed by USF’s commitment to student success, which is why he chose USF. His undergraduate studies led him straight into epidemiology research with the integrative biology research department. He was first intrigued by the study of diseases when he was seven years old and his mother suffered from an undiagnosed illness which was later identified as Lyme disease. As a student leader, Mercier was president of the USF chapter of Mathematical Association of America and the USF Russia Culture and Language Association. Mercier plans to attend Harvard in the fall where he will pursue a doctoral degree in public health science with a concentration in epidemiology. 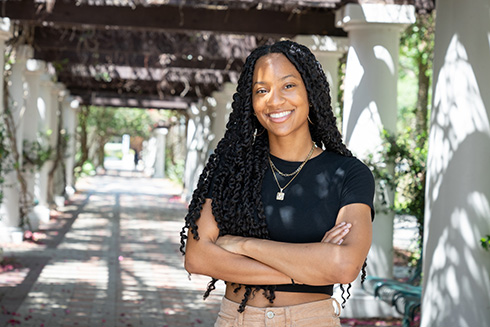 Jataya Jackson learned from her mother how important it was for patients to feel heard. This inspired her to pursue a career in medicine as an obstetrics and gynecology specialist with the goal of advocating for Black women and making sure they feel heard. Jackson completed concurrent degrees in biomedical sciences and public health as a student in the Judy Genshaft Honors College. In 2019, Jackson took part in a Bulls Service Break trip to Miami to learn about human trafficking prevention and visited Thailand on a study abroad trip. Her passion for education and advocacy inspired her to join the Backstage Pass to Health Professionals course where she connected leaders from USF Health with other undergraduate honors students. She recently received one of the highest honors for USF students, the Golden Bull Award, for her commitment to service and leadership. Jackson is also a member of the Dean's Students Leadership Society, the Order of the Golden Brahman, the College of Public Health Scholars cohort, fundraising chair for the Black Student Union and an Honors Ambassador. After graduating, Jackson will prepare for the MCAT exams and work at the USF Health Center for Advanced Medical Learning and Simulation as a simulation operations specialist.

Adriana Ladera was born in New Zealand and moved to Florida when she was four years old. Her family settled in Pinellas County where Ladera grew up. At first, Ladera signed up as a pre-medical student but later discovered her true passion in algorithms. She chose USF because she loved the research opportunities and wanted to stay close to home. While at USF, Ladera began developing an interest in building efficient simulation algorithms. Ladera was just awarded a 2022 National Science Foundation Graduate Research Fellowship and will pursue her studies at the Massachusetts Institute of Technology. As a passionate computer scientist, her goal is to help shape the next generation of scientists and inspire diversity in STEM through her research, leadership and identity as a bisexual woman of color. 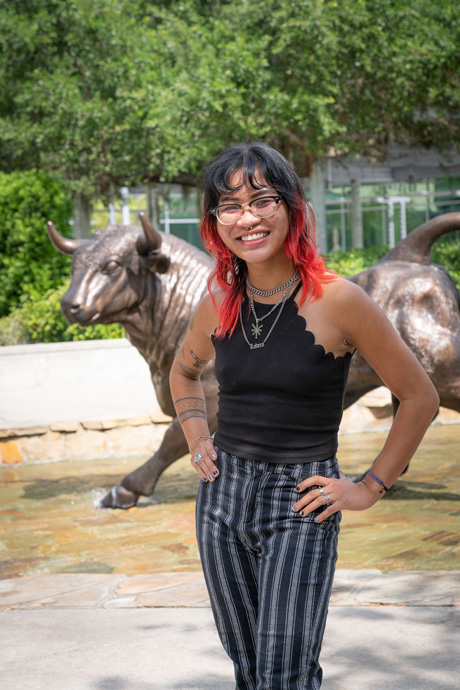 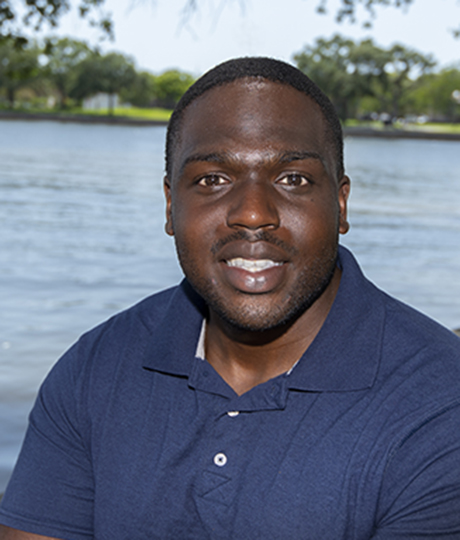 Alexander Morris was one of three high-achieving students selected to participate in USF’s Emerging Scholars program, an award given to students from Pinellas County schools with outstanding leadership potential that includes a tuition scholarship and mentorship opportunities. As part of the program, Morris was matched with a mentor, Officer Kevin DeLoatch from the University Police Department. Morris said he really benefited from DeLoatch’s guidance, especially when he was a freshman and needed help managing his time. He graduates this spring from the USF St. Petersburg campus with a degree in economics. Inspired by his uncle, a prominent defense attorney in Philadelphia, Morris is currently working at a law firm and plans to take the Law School Admission Test and apply to law school. 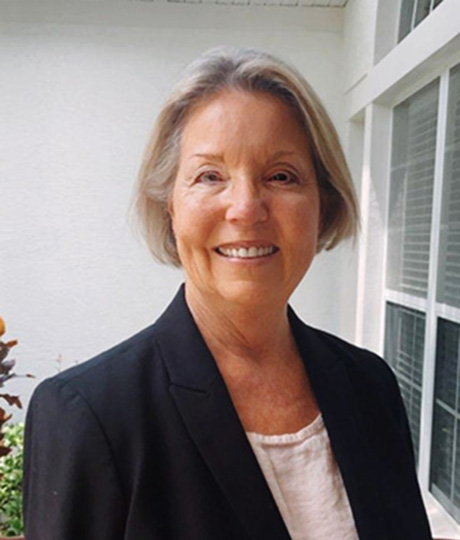 Before attending USF, Charlene Barnes led a full career as an information technology professional in finance. In 2015, her son contracted meningococcal disease and died within 24 hours of his first symptoms. Haunted by the experience, Barnes, 68, set out to better understand the disease and dedicated herself to trying to make a difference. After almost 45 years since graduating with a bachelor’s degree in management science from the University of California San Diego, Barnes enrolled in the USF Sarasota-Manatee campus’s Accelerated Second Bachelor’s Degree program to become a registered nurse. She immediately appreciated the difference of being an older student. Barnes also enjoyed the hands-on experience of working intimately with patients throughout the 16-month program at Manatee Memorial Hospital and then at the HCA Blake Medical Center. After graduating, Barnes plans to pursue epidemiology research and hopes to volunteer for the Manatee County Health Department. 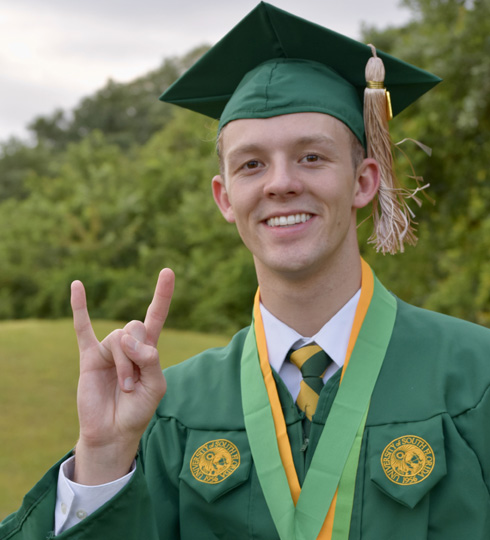 Outgoing and confident, Carter Bedinghaus admits to being a bit nervous when preparing for college. But the the USF Sarasota-Manatee campus’s close-knit community inspired Bedinghaus to immediately get involved. Four years later, Bedinghaus says he’s loved every single second of college, especially giving back to peers as an orientation leader and USF Ambassador. In 2021-2022, he received a Campus Involvement and Leadership Award, and this spring he was named to the Muma College of Business’ 25 Under 25 list. Bedinghaus also received the Golden Bull Award, one of USF’s highest student honors. As a sophomore, Bedinghaus was elected president of the Student Senate, later serving as vice-chair of the Campus Council – finding Student Government a gratifying way to develop leadership skills and serve his community. While the Manatee County native can imagine a future run for political office, his immediate plans are to pursue a career in dentistry, a unique path for a marketing major. But he’s excited to apply his business and leadership skills to a career that will allow him work closely with patients of all ages. Like many teens, Bedinghaus wore braces for several years, and it’s a positive experience he wants to share with others. This fall he will attend the LECOM School of Dental Medicine. 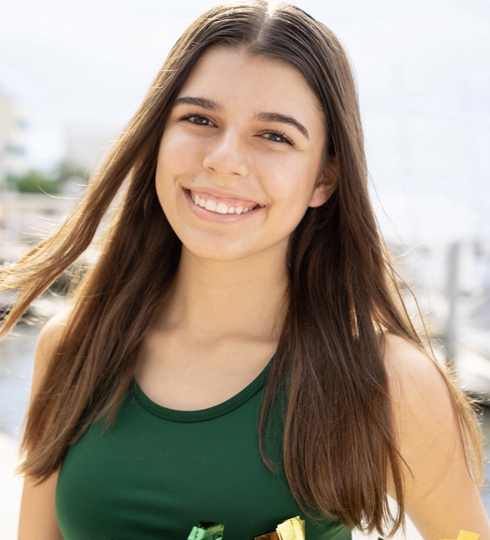 Due to the COVID-19 pandemic, Wren Kasper Orteneau completed her first year at USF solely online. She transferred to the USF St. Petersburg campus as a junior psychology major after simultaneously graduating from high school and earning her associate in arts degree at 16 years old. Eager to experience college life, Orteneau, 18, moved on campus for her senior year and was pleasantly reminded why she had chosen USF. She loved the campus beach setting and the water. As a competitive Highland dancer and young academic high-achiever, Ortenaeu’s speedy transition from high school gave her a special perspective about mental health. Her coursework, which includes a certification in dance medicine and science, helped her understand the relationship between anxiety and stress. Orteneau conducted research to learn more about performance anxieties in competitive dancers. She plans to earn a master’s degree in occupational therapy and wants to apply her experience with dance, fitness and mental health to work with children. 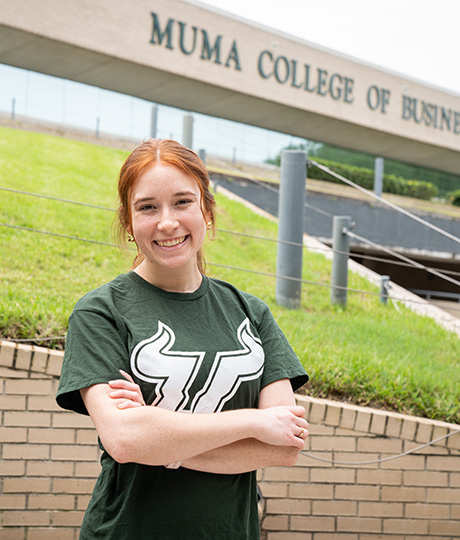 When it came to deciding what university to attend, USF was a clear choice for Darcy Williams. As a Tampa native, Williams was well aware of the metropolitan area’s business growth and wanted to be part of it. She began building her business network as a resident student with the Bulls Business Community and then branched out to other areas. During her freshman year, Williams was vice president of recruitment for Phi Chi Theta, a business fraternity, and helped the chapter grow more than 90 percent by her senior year. She worked at what is now the Muma College of Business’ Bellini Center for Talent Development as a peer mentor. She also held five internships throughout her time at USF, one of which led to her thesis research on the effects of COVID-19 in commercial real estate business and her 2-year employment with Raymond James. After receiving three job offers, Williams decided to take a position as an institutional sales analyst with the investment firm Barings in North Carolina. 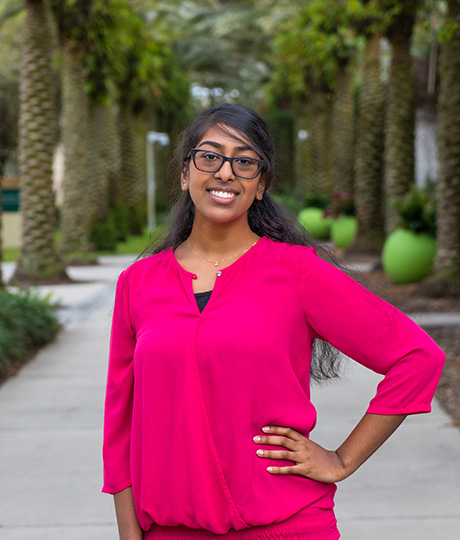 Meghana Nelluri had her pick of universities but chose USF thanks in part to the university’s emphasis on interdisciplinary study – a focus that has allowed her to not only work toward an accounting degree but add a second major and two minors. As a first-generation American, Nelluri has tried to take advantage of every opportunity. She has served in leadership roles within the Judy Genshaft Honors College Student Council, worked as a resident assistant and is on track to graduate in three years as part of the Provost’s Scholar program. While juggling an intensive course load, Nelluri also completed a competitive internship with Deloitte and accepted a full-time position to stay with the company after graduation. She will also pursue her interest in non-profit work at the Human Society of Tampa Bay.

Jamie Warner loved USF’s proximity to her parents and the diversity of the campus community. Warner’s father was sick and passed away during her freshman year, which significantly impacted her approach to medicine. She’s carefully working to mold herself into the best, most compassionate future physician she could be. She earned her emergency medical technician certificate after her freshman year and administered over 1,000 COVID-19 vaccines in the summer of 2021. Warner volunteered with the interventional radiology team at Moffitt Cancer Center and scouted for physicians with the best bedside manner to shadow. She also volunteered at the Judeo-Christian Health Clinic while she studied for her MCAT to remind herself why she wants to be a doctor. She has also mentored students wanting to pursue medicine, particularly students of color, and worked with an interdisciplinary research team focused on building resilience in underserved communities. She was recently awarded the Golden Bull Award, one of the university’s highest honors for students. After graduation, Warner will join the USF School of Social Work in Spain to study the impacts of socio-cultural contexts on health. She plans to then pursue her medical degree at the University of Florida College of Medicine in the fall. 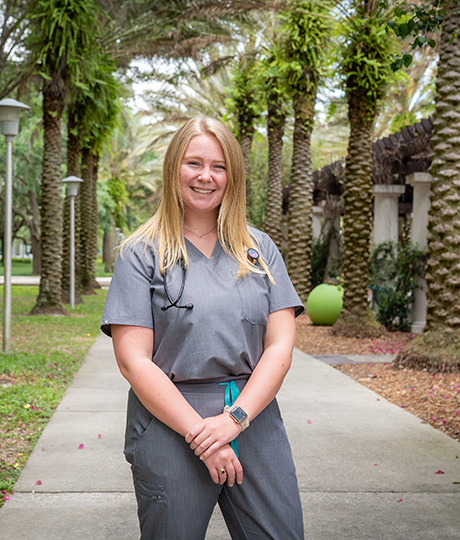 As a dance major with a minor in psychology, Samantha Kedziora turned inward during her final year and left an impression on the College of the Arts’s stage. Kedziora’s final choreography highlighted her struggle managing an eating disorder. She used film and dance to recreate the different stages of her reflection and recovery processes with the hope of promoting awareness among her dance peers and audiences. As a Global Citizen Award recipient, Kedziora also hosted an event to talk about eating disorders with the wider USF community. After graduating, she plans to tour with dance companies in Europe and will join the USF dance exchange program in Paris. She also plans to continue advocating for mental health and for the application of the arts as a way to engage audiences. 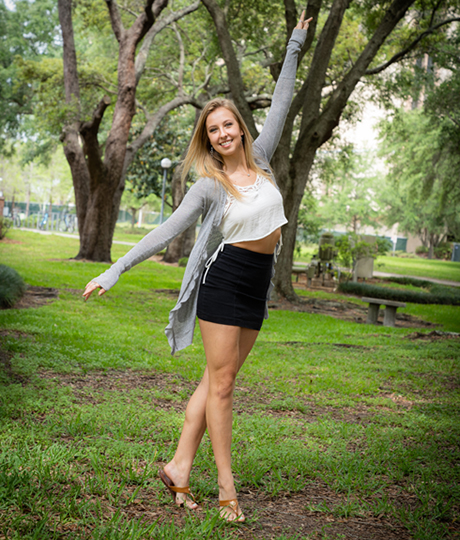