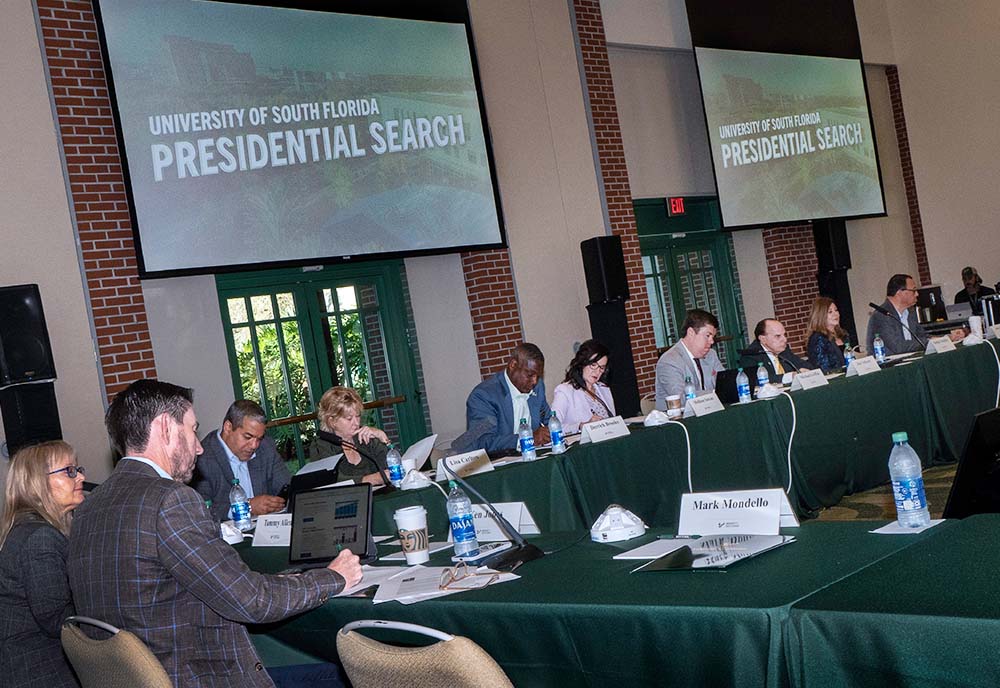 Two candidates seeking to become the eighth president in University of South Florida history are moving forward in the search process. The USF Presidential Search Committee interviewed Interim President Rhea Law and Jeffrey Talley and voted to advance both candidates to the next round, which includes visits on each of USF’s three campuses, followed by interviews with the USF Board of Trustees (BOT).

The campus visits will give the USF community an opportunity to interact with each candidate, share ideas and ask questions.  The visits will take place on Monday, March 21, at the following times and locations:

Participants are invited to submit questions online ahead of the sessions through the USF Presidential Search website. Questions will also be solicited during the sessions from in-person participants.

Following each campus visit, participants will have the opportunity to share feedback online through the USF Presidential Search website. This feedback will be reviewed by the USF Board of Trustees prior to interviewing the candidates at 9 a.m. on Tuesday, March 22, in Traditions Hall, at the Gibbons Alumni Center on the Tampa campus. The Board will evaluate the candidates and may then name the next president, subject to confirmation by the Florida Board of Governors.

The campus visits and the candidate interviews will also be livestreamed on the USF Presidential Search website.

Below are bios for each candidate:

Rhea Law’s leadership experiences and qualifications are numerous and diverse. A USF alumna, she is the former chief executive officer and chair of the board of Fowler White Boggs, a Florida law firm. She led the merger of Fowler with a national firm, Buchanan Ingersoll & Rooney, in 2014. She is one of the founding members of the USF Board of Trustees, where she spent five years as vice chair and four years as the first and only female chair. 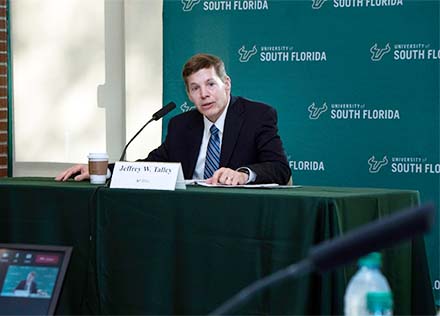 He currently serves as a member of the U.S. Global Leadership Coalition based in Washington D.C., an organization that works to strengthen tools of national security. He also serves as president and CEO of The Public Private Partnership Initiatives (P3i) Group, a management consulting firm for government, business, not-for-profit and academia. His military career included duty in the United States, Korea, Kuwait and Iraq. His service culminated in 2012 when he was appointed to the rank of lieutenant general and to a four-year term as the 32nd chief of Army Reserve and seventh commanding general of the U.S. Army Reserve Command – an organization of over 215,000 soldiers and civilians and 134 general officers and executives, with an annual operating budget of $9 billion, and activities in over 30 countries, including all states and territories. He has received numerous medals and awards, including two Army Distinguished Medals and three Bronze Star Medals. He retired from the military in 2016 and was recognized by the U.S. Senate on June 28, 2016, with "Tribute to Lieutenant General Jeffrey W. Talley", as reflected in the congressional record.