During one of Andrea Coloma's internships with NASA, she was invited to see the development of future Orion capsules.

Growing up near Kennedy Space Station, Andrea Coloma always dreamed of working for NASA one day – not as an engineer or astronaut – but as a graphic designer. Fast forward to today, she just finished illustrating an educational children’s book for NASA’s Space Communication and Navigation program (SCaN), thanks in part to a series of internships with NASA.

Created during her fifth and final internship, the children’s book highlights SCaN’s role in the recent Artemis I mission, which successfully splashed down to Earth on Dec. 11. The imagery is not approved for release, but NASA plans to publish the book this year. 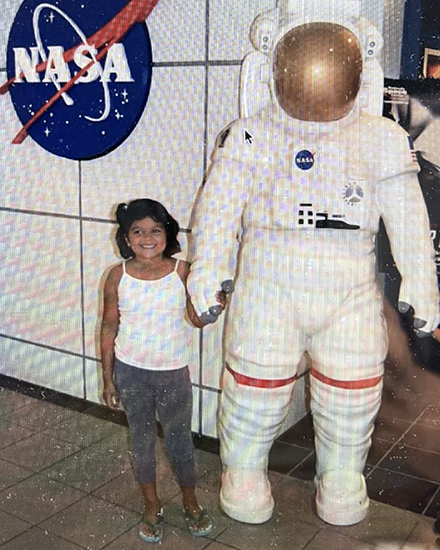 As a second-generation immigrant from Ecuador, Coloma was nervous to tell her parents about her desire to pursue a career in art because of the stereotype that it is not financially stable. “I felt like I needed proof that I could do it, so I went on LinkedIn and started messaging graphic designers from companies that I admired,” Coloma said.

Molly Kearns, digital media specialist for SCaN at NASA’s Glenn Research Center in Cleveland, responded to the message and organized a meeting between Coloma and a couple of graphic designers at NASA. The conversation led to Coloma being offered a SCaN Internship Project shadowing position on the Policy and Strategic Communications team where she spent the summer creating an illustration spread for its newsletter. “This was my first dip into the professional world of design, and I learned so much throughout this experience,” Coloma said.

The experience at NASA was proof enough of a successful career as an artist for Coloma because she promptly enrolled in the graphic arts program on the USF St. Petersburg campus in the fall of 2021. Coloma’s relationship with NASA continued with a virtual animation internship on the Orion Communications team at NASA’s Johnson Space Center in Houston. “This internship was a great challenge because I had not animated before,” Coloma said. “I used the two days before my interview for the position to learn how to animate and show that I had the potential to learn.”

After completing her first internship with the team, Coloma was asked to return the next semester for an additional internship session. Over the course of these two internship sessions, she was tasked with creating three, one-minute children’s animation videos that explain how NASA’s Orion spacecraft would use a distant retrograde orbit during Artemis I, the first of NASA’s historic Artemis missions, which will land the first woman and the first person of color on the moon by 2025.

At the same time, Coloma was adjusting to being away from home for the first time and balancing the responsibilities of her first year in college. Her internship concluded with witnessing the Space Launch System rocket roll out for launch and the development of future Orion capsules.

When summer rolled around again, it was full circle for Coloma when she was invited back to the Policy and Strategic Communications team to illustrate not just one page of its internship newsletter, but the entire product. “My favorite part was creating a style for the whole newsletter and executing it,” Coloma said. “It was amazing working with the team because they gave me so much creative freedom to steer the newsletter in the way I wanted.”

Then Coloma stayed on the team into the fall to create the children’s book. “We are so proud of Andrea and the work she has accomplished over the last year and a half as our intern. It has been so rewarding to watch her technical and professional skills evolve over the last year,” Kearns said.

Coloma plans to keep in touch with her connections at NASA for future internship opportunities, feedback on her work and advice on her career. Inspired by her internships, Coloma plans to continue to shape her career in the direction of impacting the world around her through design.

Imagery and video courtesy of Andrea Coloma and NASA.