When an ounce of fruit punch escapes a straw in the zero-gravity, it forms a perfect sphere. Flames in space also are perfectly round. And, the cuisine aboard a shuttle or the International Space Station … not that good.

“If there was a restaurant down here that served only space food,” said Don Thomas a NASA astronaut who served on four shuttle missions a couple of decades ago, “I probably would not go to it.”

Thomas’ keynote speeches at the Destination Station event at the Muma College of Business highlighted the two-day event at which NASA officials talked about the commercialization of space and opportunities for entrepreneurship, the research going on in zero-gravity environments and what it’s like to spend extended periods of time circling the earth for days on end. Outside, in the college’s breezeway, an interactive exhibit featured a moon rock and other displays of the U.S. space agency. 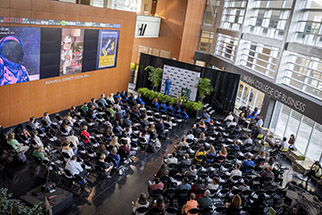 The commercialization of space also was a topic of discussion. Christine Kretz, vice president of programs and partnerships at ISS National Laboratory, said much of the transport to the ISS now is aboard commercially built crafts and the private sector is utilizing the zero-gravity labs to conduct experiments that could benefit those on the ground. Adidas recently announced a collaboration to build shoe parts on the ISS and Budweiser is experimenting with growing hops sans gravity. Fiber optic materials, it turns out, have an improved quality when built in space.

“We’re the test kitchen for things like that,” she said. The ISS also is on the forefront of 3-D printing and that’s what Alvin Williams, owner of Building Concepts, wanted to hear. Williams, a building contractor who is experimenting with 3-D printing of homes came to find out more about the process.

“I’ve been a building contractor for 25 years and I’ve always wondered if there was a better way,” he said. “Automation has become such a big part of all our lives, except for housing, so why not?” He is working on a 3-D printer prototype that will print out a single-story concrete house.

The sky for all these things, said Thomas, the astronaut, is literally limitless. In five years, expeditions are expected to land humans on the moon, where scientists believe they will find water at the southern pole, water that can be used to sustain life and create rocket fuel. Then, it’s on to Mars, where in a quarter of a century, humans could set foot on the Red Planet and/or one of its moons. All of this will happen with the help of private industry, which already has imbedded itself into almost every aspect of space exploration and which has come up with the creativity to accomplish goals effectively and efficiently.

Thomas’ participation in space exploration was not an easy launch.

He was rejected three times, though he had established the skills he believed he needed to be accepted into the program. After his third rejection, he quit his engineering job at AT&T and took a job as an engineer at the Johnson Space Center in Houston. That’s the one thing he noticed about the candidates who were accepted. They worked there.

On his fourth application, after working at the center for three years, he was called up.

He described his first trip into space in vivid detail, how the Shuttle Columbia shot off the launch 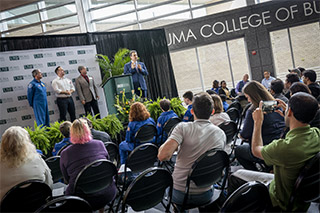 pad hitting 120 mph in four seconds and how it reached 17,000 mph while orbiting the Earth. He talked about the details. How astronauts ate, drank; how they washed up and even how they dealt with other, less savory, bodily functions. He told of the beauty of space, of the earth, even, as seen from 200 miles overhead, its violent hurricanes and its erupting volcanoes. He mentioned the thin blue line that could be seen on the planets horizon, its fragile atmosphere.

“Every time an astronaut got some free time,” he said, “they would go to the window and peek out at the Earth.”

As soon as he landed, after 16 days in space, Thomas walked away from the shuttle on the runway, looking over his shoulder at the machine that carried him into space and back again safely.

“I thought, wow, this was an incredible adventure,” he said. “Then, my main thought was this: I have got to do this again.”

He went on three more missions before, 22 years ago, handing his mission specialist duties off to a younger generation.

An engaged question-and-answer period followed with attendees asking about biomedical research, the future of the ISS, the entrepreneurial opportunities. And, of course aliens.

Thomas told the story about his first flight, how he peeked out the window and saw in the blackness of space, a blinking light that mirrored the shuttle’s speed and orbital path.

“I thought, how lucky am I,” he said. “On my first mission, I’m making contact. But it wasn’t to be. The perceived alien craft turned out to be a big sheet of ice that had broken off his own spacecraft and was tumbling in space, catching the sunlight with every turn, looking like a UFO with flashing lights.”

Stephen Peña Osorio, 21, wants to follow in Thomas’ space boots. He is studying aeronautical sciences at USF, and he came out to the event for inspiration. He said he is on a structured path he hopes to lead to rocketing into space, including an engineering degree and military service.

He always has wanted to get into space.

Jake Brown heard about the event last week. He lives in Tampa, but takes space systems courses at Florida Institute of Technology in Melbourne, near Cape Canaveral.

A 29-year-old native of Canada, Brown also is following a path to be an astronaut. He’s obtaining a master’s degree in engineering and learned to fly in the military.

“I’ve spent the past six years,” he said, “building my résumé.”

The advice Thomas gave to Peña Osorio and Brown was the same for everyone who wants to one day reach the final frontier: 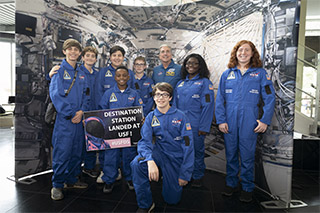 Muma College of Business Dean Moez Limayem lauded the efforts to bring the exhibit to Tampa and thanked Lynn McDaniel, a retired teacher from Stewart Middle Magnet School, who played an integral part in arranging the visit.

“Why was this brought to the Muma College of Business?” Limayem asked. “The exploration of space is becoming more and more the province of the private sector. And that means jobs for qualified graduates, be they engineers, accountants, marketers or information systems specialists.

“Already there are more than 17,000 aerospace-related companies in Florida with more than 130,000 employees and those numbers will certainly grow in the future and the demand for qualified talent in Florida alone will be, well, astronomical.”

Alex Wynn, a seventh-grader at Stewart Middle Magnet School, who served as a volunteer at the first day’s event, said he wasn’t so sure about being an astronaut. His sights were set on something different a little closer to the Earth.

“I want to be an engineer,” he said. “I want to make the space ships that will go do a different galaxy.”

Today.com: Coronavirus and bars - How to stay safe as COVID-19 cases spike