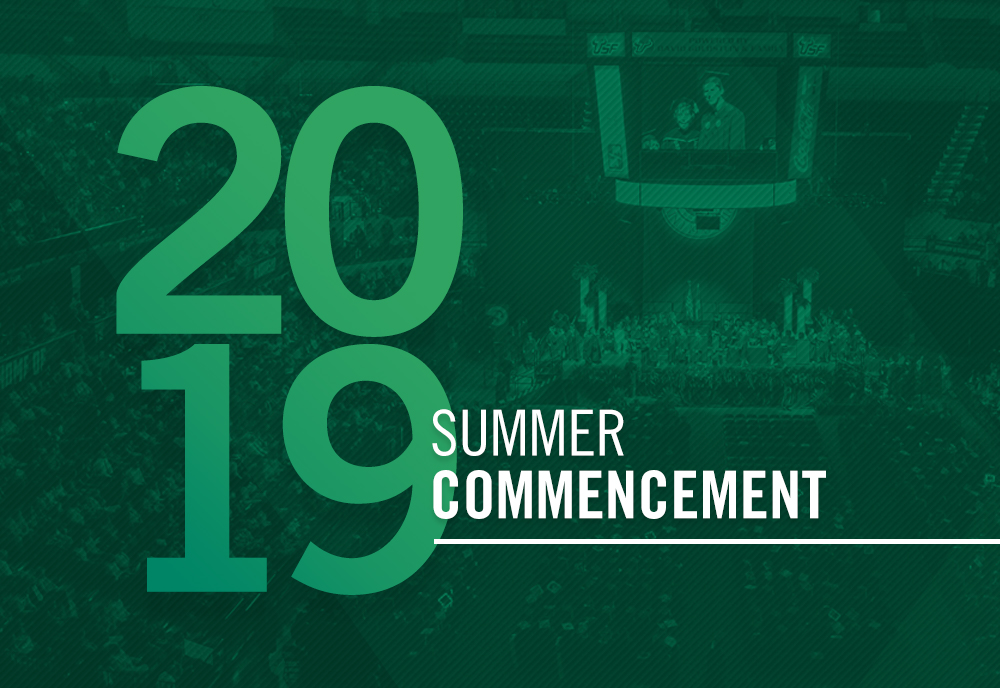 More than 3,200 USF System degrees will be conferred during a total of three ceremonies at the Yuengling Center in Tampa and the Mahaffey Theater in St. Petersburg, including graduates from 48 states and 79 nations. The youngest graduate is 19-years-old and the oldest graduate is 64-years-old.

A schedule of the commencement ceremonies can be found below. 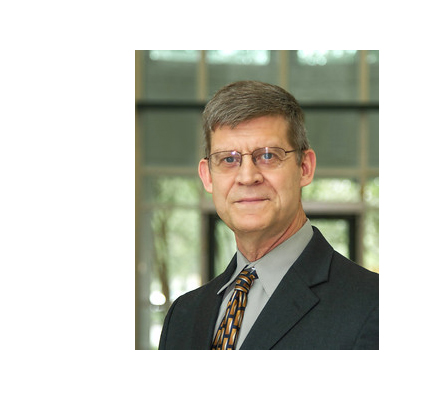 Just three days after Rich Young walks across the commencement stage, the career serviceman will board a plane for Afghanistan. In this deployment, Rich will serve as the Minister of Interior Liaison Officer to the Special Operations Joint Task Force. The deployment is part of his civilian role at U.S. Special Operations Command, a position he’s maintained throughout his rigorous doctoral program. Prior to his civilian service, Rich spent more than 20 years in the U.S. Army Special Forces. He’s not only traveled the world but spent time teaching cadets at West Point, officers at the Army Command General Staff College and more. It was that background in education, mixed with a practical desire to utilize his G.I. Bill, he says, that pushed him to pursue an Ed.D. at USF. Now, with that goal complete, he’ll spend the next six months in Afghanistan – a deployment he says will likely be his last in the military before moving on to his next challenge. 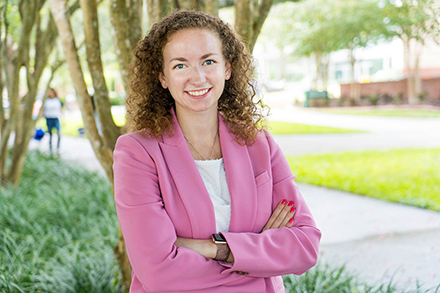 As a high school graduate, Andrea Prospect knew she wanted to find a university that would educate and empower her to make a difference in the lives of vulnerable populations. So, when the Connecticut native first visited USF, she says she was blown away with the endless academic and extracurricular opportunities available to Bulls. Now, just three years later, Andrea is graduating a year early as one of USF’s King O’Neal Scholars and recipient of the Summer 2019 Outstanding Graduate Award. She was able to seize many of the opportunities that first attracted her to USF. She’s held a number of internships, including with the Special Olympics and the Human Development Center, an organization providing services to adults with developmental disabilities. Andrea has also made an impact on campus, helping plan Week of Welcome and work as a mentor for first-year students. Next, she plans to continue her education and pursue a master’s degree in Public Health. 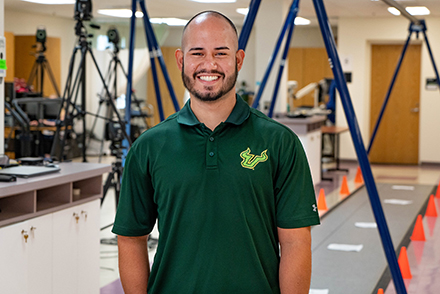 Born in Puerto Rico, Exor Serrano Arce always knew he wanted to follow in his father’s footsteps and one day join the military. But, at 16 that dream disappeared after Exor was diagnosed with Lupus, a lifelong autoimmune disease that disqualified him from military service. After his diagnosis, he says he wasn’t sure what he wanted to do with his life but decided to pursue an education. While working toward his bachelor’s degree at USF, Exor was introduced to physical therapy. It became his passion. Now, six years after first stepping foot on campus as an undergrad, Exor is receiving his Doctor of Physical Therapy degree. And while he wasn’t able to fulfill his dream of joining the military, his time at USF brought with it opportunities to work at V.A. – helping and serving those that he aspired to emulate. 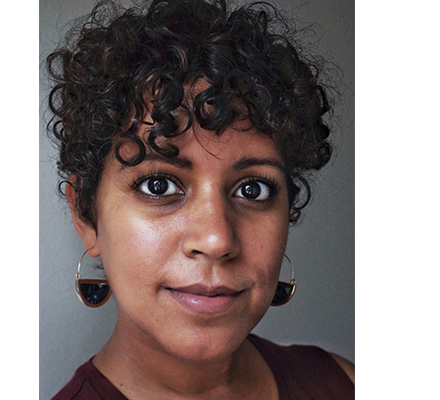 Martha Asencio-Rhine, 36, had never really picked up a camera until after the birth of her first son, Evan, in 2004. But it didn’t take long for her to get hooked. While she initially focused on portraits, Martha began gravitating toward documentary work and photojournalism as her passion developed. Drawn by its small size and strong journalism program, she decided to enroll at USF St. Petersburg and earn a degree in Mass Communications. While in school, Martha shot pictures for the university’s newspaper, the Crow’s Nest, and in 2018 won the Most Outstanding Student Photo Award from the National Association for Black Journalists (NABJ). She is now a multimedia producer with the Tampa Bay Times. A native of the Dominican Republic who immigrated to the U.S. with her family at age 8, she said she feels honored to give voice to people whose stories might otherwise not be heard. 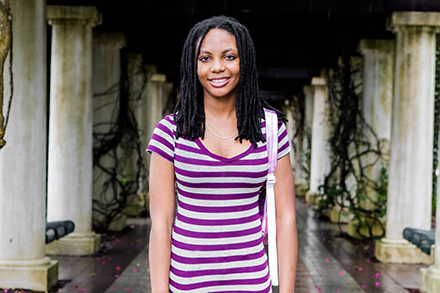 At 19-years-old, Queen Lucombe is graduating from USF when many students her age are just getting started. It’s not a new concept for the psychology major. She started Pre-K when she was three, began taking college level courses at 12 and graduated from high school with a perfect GPA at just 15-years-old. While she’s always been much younger than her peers, Queen doesn’t think of herself as “gifted” – rather she says she and her siblings have always been on an accelerated path, thanks to her parents’ emphasis on education. Since coming to USF, Queen has had the opportunity to not just develop her intellect but expand her worldview. She’s been able to study abroad twice, once in Paris and again in Vienna, and says the experience had a huge impact on her. After she graduates, Queen plans to keep studying for the MCAT and hopes to attend medical school in the future. She says she hopes to work with children as a psychiatrist or neurologist. 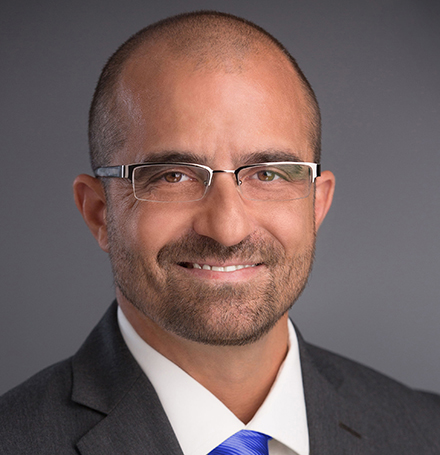 Gabriel Hawk never imagined himself in college, much less a graduate, until life threw a few curve balls and eventually steered him toward USF Sarasota-Manatee. The first came 16 years ago when a nagging back ache turned out to be multiple ruptured discs that forced him off his feet and derailed his chef’s career in Philadelphia. Resolving to reorder his priorities and focus on health, he headed for a warmer climate and landed in Sarasota, trading his chef whites for a career in restaurant management. But with 50- and 60-hour work weeks soon the norm, Gabriel discovered he was missing out on precious family time with his wife, step-daughter and young son. He then opted for another life change, this one as a college student and founder/owner of a consulting firm, Soaring Communications. Now 43, Gabriel is set to earn a bachelor’s degree in professional and technical communication from USF Sarasota-Manatee. Combined with his extensive management background, he expects the degree to help as he counsels businesses and non-profit groups on training, development and HR issues. He also is debating whether to pursue a master’s or doctoral degree.

Graduates and attendees are encouraged to use #USFGRAD on social media posts. Those unable to attend in person, can watch a live stream of the commencement ceremonies here.