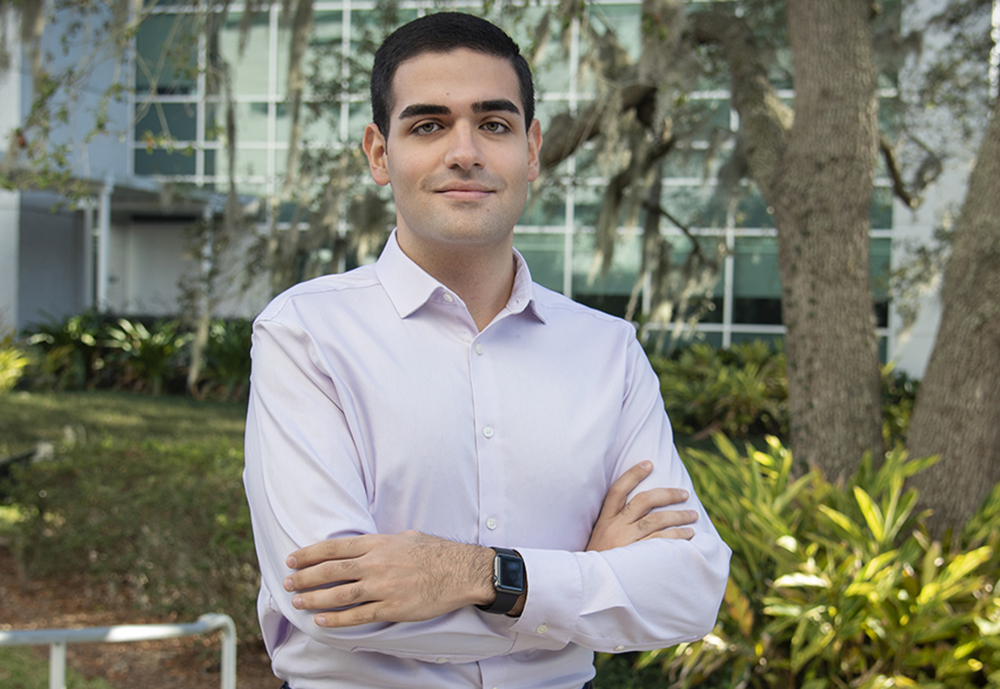 Recent University of South Florida graduate Shawn Zamani is one of a select few from around the country named a Gates Cambridge Scholar for 2019, earning a scholarship for post-graduate studies at the University of Cambridge. Zamani is one of only 34 U.S. students to earn the honor this year and only the second USF student ever to win a Gates Cambridge award, one of the most prestigious international scholarships in the world. The full class of scholars were announced on Thursday.

“I am thrilled to study at Cambridge alongside fellow Gates-Cambridge Scholars, all of whom are from such a diverse mix of cultures and backgrounds,” said Zamani. “It’s a unique and incredible opportunity to work with so many talented students who all share a mission of improving lives around the world.”

Funded by the Bill and Melinda Gates Foundation, the scholarship is for intellectually outstanding students who have a capacity for leadership and a commitment to improving the lives of others.

Zamani’s achievement is even more remarkable considering he emigrated with his family to America from Iran in 2012 knowing little English. He entered classes at Gaither High School once arriving in Tampa. “I learned the language through immersion,” he says. “It was sink or swim.”

After earning an associate’s degree with a 4.0 GPA from Hillsborough Community College, Zamani transferred to USF in 2016 thanks to a Jack Kent Cook Scholarship. This award is the nation’s only prestigious transfer scholarship and provides funding and support for top community college students seeking to complete their bachelor’s degrees at selective four-year colleges or universities.

“It’s a unique and incredible opportunity to work with so many talented students who all share a mission of improving lives around the world.”–Shawn Zamani

Once at USF, Zamani began working on research projects tied to reshaping smoking policies on campus. He has published research on the effects of these policies, and has additional research related to risk factors for various cancers, scheduled to be published soon. He was accepted into the highly competitive Amgen Scholars Program (which has an acceptance rate of less than three percent) for the summer of 2018, which allowed him to conduct epidemiological research on upper gastrointestinal cancers at the National Cancer Institute in Bethesda, Maryland. Zamani was named USF’s Outstanding Graduate in December 2018, an award given to a graduating senior each semester by the USF Alumni Association. A member of the USF Honors College, he earned a bachelor of science degree from the College of Public Health with a 3.97 GPA.

Zamani is currently a research assistant in the Department of Cancer Epidemiology at Moffitt Cancer Center and serves as director of public health at the BRIDGE Healthcare Clinic, a student-run free clinic located on USF’s campus.

His studies at Cambridge will begin this Fall and he will work with Professor Rebecca Fitzgerald, a global expert in the field of esophageal cancer. After obtaining his PhD, Zamani aims to work for the U.S. Department of Health and Human Services in cancer prevention and policy.

“I am very proud of Shawn’s passion to improve human health and wellbeing and his dedication to research and community engagement,” said Ralph Wilcox, USF Provost and Executive Vice President. “I’m grateful to our faculty mentors and to our Office of National Scholarships for helping him compete for this prestigious award. He is well prepared to enter the ranks of Gates Cambridge Scholars and continue his studies at such an elite university.”

The Gates Cambridge program was established in 2000 by a donation of $210 million from the Bill and Melinda Gates, the largest ever single donation to a UK university. Applicants must be accepted into Cambridge University first, before being considered for the Gates Cambridge Scholarship. While at Cambridge, Scholars pursue full range of subjects available at the University and are spread through its departments and Colleges. The program aims to build a global network of future leaders committed to improving the lives of others.