‘Suture Zone’ to Blame for Mysterious 2014 Earthquake Felt Across Florida 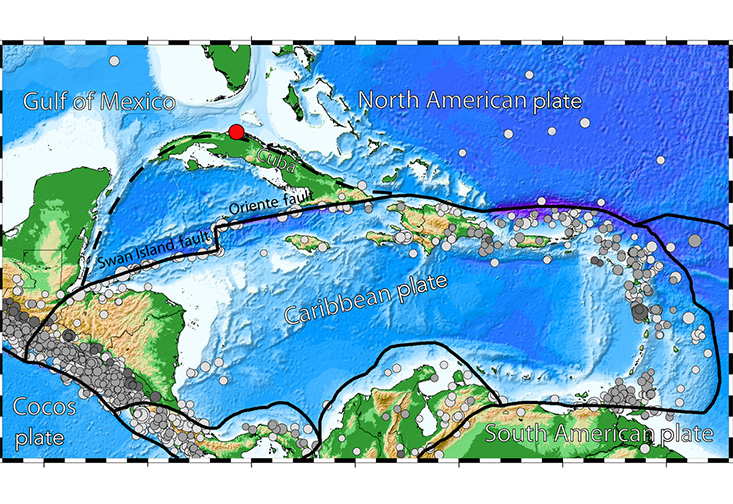 An overview map of the Caribbean plate and its surroundings. The large red circle marks the location of the 2014 northern Cuba earthquake that occurred near the Bahamas–Cuba suture zone several hundred miles north of the current plate boundary.

New research from University of South Florida seismologists has uncovered the unexpected source of a 2014 earthquake felt across southern Florida – an anomaly for a state that historically has almost no seismic activity.

The magnitude 5.1 quake occurred along the northern coast of Cuba on Jan. 9, 2014. USF seismologist Jochen Braunmiller, a research assistant professor in the School of Geosciences and the study’s lead author, was surprised when he heard reports of Florida residents feeling the quake.

“I’m a seismologist in a state where there are no earthquakes,” Braunmiller said. “So anytime there’s something close by, it peaks my interested. When I saw news reports that people felt it as far north as Tampa Bay and Orlando, I checked it out myself and became very interested about this plate region.”

Earthquakes are not an uncommon occurrence in Cuba and across the Caribbean. The region is home to the boundary between the North American and Caribbean tectonic plates, with several active fault lines spanning thousands of miles.

In 2010, these same faults were responsible for the devastating magnitude 7.0 quake in Haiti, which impacted an estimated three million people. However, the primary plate boundary and related faults run along the southern coast of Cuba and further south, which is why the 2014 quake, several hundred miles to the north, was so unusual.

Using available seismological data, Braunmiller and his co-authors were able to learn where the earthquake had occurred giving clues as to the why. Published in the Bulletin of the Seismological Society of America, the research shows the earthquake was caused by a rupture of a part of the Bahamas-Cuba suture zone, an area more than 300 miles north of where earthquakes typically occur in the region.

“This was the first significant earthquake in that zone in the last 75 years,” Braunmiller said. “And because of the suture zone’s proximity to Florida, many residents here were able to feel it.”

According to Braunmiller, the suture zone is where the North American and Caribbean plates collided millions of years ago. Over time, the plates pushed over one another and fused together, forming the suture. Due to the geological conditions of the earth, the zone remains weaker than its surroundings and is more susceptible to rupture.

Researchers say that while the 2014 quake demonstrates the possibility of this zone rupturing, it’s impossible to predict when and exactly where it will happen again and how severe it could be.

To learn more about the USF Seismology group, visit their website.

College of Arts and Sciences, School of Goesciences