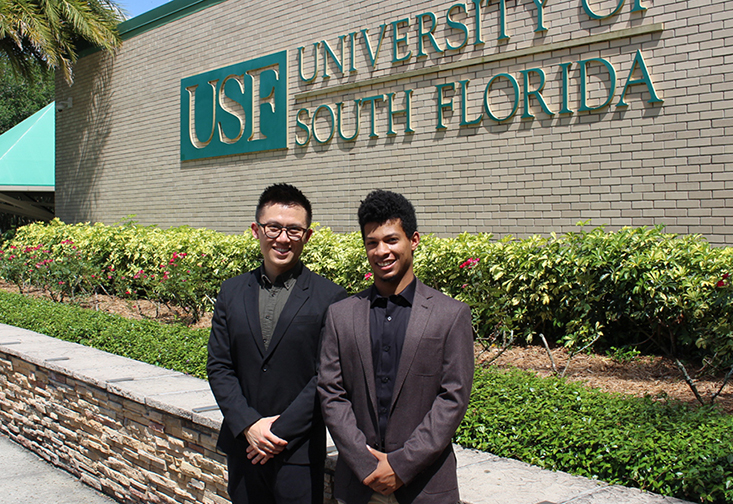 Two USF Honors College students, Keller Blackwell and Willie McClinton, have been named Goldwater Scholars for 2019, chosen out of nearly 1,300 students nationally who were nominated through a highly selective process. The scholarship is the most prestigious undergraduate award in the country for science research and provides $7,500 for educational expenses and research support.

McClinton, a Computer Science major, is currently involved in two research projects with the university. The first project is working with Dr. Marvin Andujar to create technology that will allow patients with ALS to paint pictures using their brains. McClinton has worked on the brain computer interface to allow the technology to work in virtual reality, giving artistic freedom to those who are no longer able to create art in traditional ways. The long-term goal of the project is to distribute it to the ALS community.

The second research project McClinton is working on is with Dr. Sriram Chellappan. Their work involves creating a smart phone app (which is now in the Beta phase) that will allow people to take photos of mosquitos to identify their specific species. “Certain species carry diseases such as Zika and Malaria,” says McClinton. “The goal is to create a way for citizens in mosquito-prevalent areas to identify those mosquitos and take the necessary precautions.”

Also looking to protect citizens, Blackwell, a Pure Mathematics major, is completing research under Dr. Gretchen L. Matthews at Virginia Tech that will help protect personal data in the future. “Within a few decades, quantum computers will defeat our current means of achieving secure communication,” says Blackwell. “My research uses mathematics to create problems that cannot be efficiently solved by quantum computers. These problems will be used to improve cryptography and protect sensitive data, which we create at an ever-increasing pace.”

A non-traditional student, Blackwell spent a decade working full-time in the restaurant industry before starting college. A transfer student from California, he was impressed by the level of caring and individualized assistance he received from professors, specifically Dr. Thomas J. Bieske and Dr. Diego Ricciotti. “There are specific challenges that you deal with as a non-traditional student,” says Blackwell. “I’ve had such excellent mentors at USF who have gone above and beyond to help me succeed. My career goal is to become a university professor and give back to others in similar situations.”

Both Goldwater Scholars plan to pursue their PhDs. McClinton’s career goal is to work with Artificial Intelligence to create multi-purpose robots that can perform a wide range of daily tasks.

Blackwell and McClinton worked with the university’s Office of National Scholarships (ONS) and its director, Dr. Sayandeb Basu, on their research goals and Goldwater applications. “Dr. Basu has been a great mentor to me,” says McClinton. “I’ve worked closely with him since my freshman year, and really appreciate his guidance and support.” ONS works with students across the USF system to identify prestigious scholarship opportunities and craft competitive applications.

“Both of these students have such bright futures,” says Honors College Dean Dr. Charles Adams. “Undergraduate research is both valued and promoted throughout our university and I am proud, but not surprised, to see how our faculty and staff have mentored Keller and Willie.”

The two award recipients bring USF’s Goldwater Scholar tally to eleven in the university’s history. Previous scholars have gone on to earn other nationally competitive awards and study at internationally prominent institutions as they work on research projects.