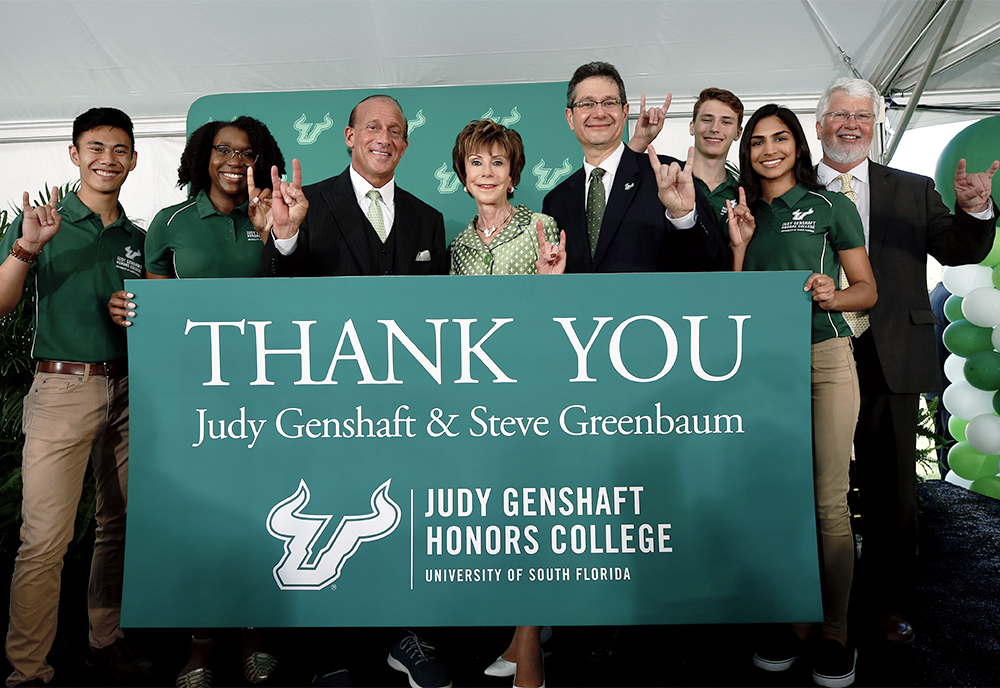 The University of South Florida System has flourished under President Judy Genshaft. Now, she continues her transformational leadership – this time through a historic gift.

President Genshaft and her husband, Steven Greenbaum, have donated $20 million to the USF Foundation. This represents one of the largest gifts of its kind ever made by a sitting university president to their institution. The donation will name the Judy Genshaft Honors College and help fund a new five-story building for the College to be built on the USF campus within the next few years. They also announced a $3 million gift to create an endowment for the deanship of the Judy Genshaft Honors College.

“We are so passionate about this university. It has been such an important part of our life and our family over the last 19 years. It’s only natural that we would do whatever we can to ensure its continued success,” Genshaft said. “Having a world-class Honors College is just one more way USF will distinguish itself as one of the most elite and forward-thinking institutions in the world. The Honors College is special because of its inclusiveness, representing the best and brightest students from all academic units across all of our USF campuses.”

Genshaft formally established the USF Honors College in 2002 and has consistently supported its growth and evolution during her 19-year tenure as president. Hundreds of Honors College students have traveled the world as recipients of the Genshaft/Greenbaum International Honors Study Scholarship and the Genshaft Global Presidential Scholarship. Those are among the many other gifts the family has given to the university across numerous areas, including the USF Graduate School, USF Health and USF Athletics, along with Women in Leadership and Philanthropy.

“Based on our research, Dr. Judy Genshaft has given more to the university in her 19 years than any sitting university president in the United States,” said Joel Momberg, USF Foundation CEO and senior vice president of advancement and alumni relations. “This is indeed a historic moment for USF and American higher education. We are so grateful for all President Genshaft and Steven Greenbaum have done for our university.”

The USF Honors College consists of more than 2,200 high-achieving, cross-disciplinary scholars who are part of a close community that provides specialized experiences and advanced educational opportunities. Students are encouraged to participate in global experiences through study-abroad, undergraduate research, and hands-on community-engagement and service projects along with professional development opportunities. The College is open to students from all academic units on each of USF’s campuses. Collectively, USF Honors College students earn an average 3.72 GPA.

With the Genshaft and Greenbaum gift, the College expects to grow to 3,000 students within the next five years. In addition to continuing to recruit the best students in Florida, the new building will greatly enhance efforts to recruit nationally and internationally by raising visibility and overall awareness.

The approximately $47 million facility is expected to feature interwoven spaces for classrooms, study areas, faculty and advisor offices, event areas, a music and computer lab, as well as numerous collaborative spaces – expanding the range of academic opportunities for students and giving them a true “home” on campus.

It will be built just north of the Muma College of Business along USF Maple Drive.

“This wonderful new facility would be impossible without the support of Judy and Steve, and it is just the most recent of their many positive impacts in the Honors College,” said USF Honors College Dean Charles Adams. “I can only imagine how many more students’ lives will be forever changed for the better thanks to their tremendous generosity.”

Since becoming president in 2000, Genshaft has catapulted the USF System to national and international prominence in every key institutional area, including student success, research and innovation, fundraising and economic development. In June 2018, under Genshaft’s leadership, USF earned the designation of Preeminence, placing USF in the most elite category of state universities in Florida.

“This transformational gift will bring USF and student success to a new level and ensure that preeminence lives on in the new Judy Genshaft Honors College. It will also provide a lasting legacy for others to emulate,” said USF Board of Trustees Chair Jordan Zimmerman.

This is the latest contribution from Genshaft before she steps down as USF president effective July 1.