World renowned USF forensic anthropologist Erin Kimmerle is featured in a documentary produced by National Geographic about aviation pioneer Amelia Earhart, who disappeared over the Pacific Ocean during an attempt to fly across the world.

Kimmerle was selected to test bone fragments stored in the Te Umwanibong Museum and Cultural Centre located in the western Pacific island of Tarawa, Kirbati. They were first discovered on Nikumaroro Island, Kirbati, three years after Earhart’s radio signal was last transmitted in 1937. However, the bones went missing after being sent to Fiji for examination. 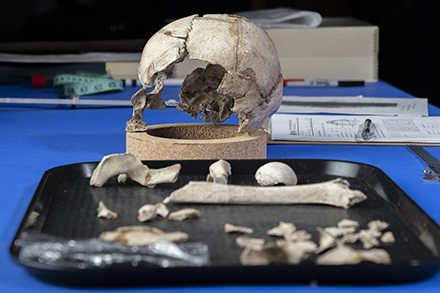 “Amelia Earhart made a huge impact in early aviation and the development of commercial airlines. She was also a brave explorer,” said Kimmerle, PhD, executive director of the Florida Institute for Forensic Anthropology and Applied Sciences and associate professor of anthropology in the USF College of Arts and Sciences. “It is an honor to be part of National Geographic's mission to discover what happened to her. Hopefully a new generation of young girls will continue to be inspired by her story.”

National Geographic archaeologist Fredrik Hiebert, PhD, recently learned of the bones’ existence and contacted Kimmerle to determine if they belong to Earhart. Kimmerle is known internationally for helping locate and identify human remains, including those discovered at the former Dozier School for Boys in Marianna, Florida.

“We needed the world’s best expert on missing people,” said Hiebert. “It was just natural to reach out to Erin Kimmerle.”

Kimmerle used the bone fragments to reconstruct a skull she believes belonged to a female. She also assessed the remains’ height, age and ancestry, and considered Earhart’s dental features and known sinus condition. In addition, bone fragments were sent for DNA testing to determine whether or not they matched any of Earhart’s relatives.

College of Arts and Sciences, Department of Anthropology, The Florida Institute for Forensic Anthropology & Applied Science