The Florida Academy of Sciences has chosen USF Distinguished Health Professor Shyam Mohapatra as the recipient of its 2020 medal, one of the state’s most prestigious honors recognizing career achievements in research, innovation and education. 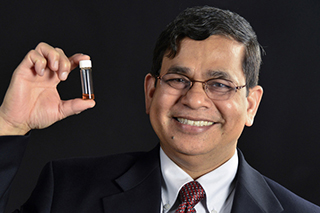 Mohapatra is the director of USF’s Division of Translational Medicine at the Morsani College of Medicine and Associate Dean of Graduate Program at the Taneja College of Pharmacy USF. A pioneer in nanotechnology and personalized medicine, he also has served as a research career scientist at the James A. Haley VA Hospital in Tampa.

“I am truly humbled and delighted to be recognized for this prestigious state-level honor by the Florida Academy of Sciences for contributions by our team including faculty collaborators, staff and students to the field of nanomedicine and nanopharmacy, which have been the lynchpin for discovery and development of novel diagnostics and therapeutics for many diseases,” Mohapatra said.

The Florida Academy of Sciences awards one medal annually to a Florida resident who has contributed in an outstanding manner to the promotion of scientific research, education and public engagement. The medal has been awarded since 1963.

In his 35-year career, Mohapatra has been at the forefront of the bourgeoning field of nanotechnology and over the course of his career developed innovative technologies in diagnostics and therapeutics for viral infections, cancer and traumatic brain injury.

Mohapatra was the first to unravel the molecular mechanism underlying Respiratory Syncytial Virus (RSV), which causes 65 million infections and kills an estimated 200,000 people worldwide each year, with infants having the greatest risk for death or life-long lung injuries. Mohapatra lead efforts to develop a treatment for RSV that mitigates the severity of the virus, increasing survival rates and decreasing long-term effects of the disease.

“Throughout his career, Dr. Mohapatra has been a champion of the advancement and dissemination of science, not only within the scientific and academic communities but also in our local and statewide communities,” said Dr. Paul Sanberg, USF’s senior vice president for research, innovation & knowledge enterprise and himself a 2015 recipient of the FAS medal. “Given his dedication to transdisciplinary research, innovation, teaching, leadership, and public service, he is a greatly deserving recipient of Florida Academy of Sciences Medal.”

As an advocate for collaboration in developing breakthroughs in the diagnosis and treatment of diseases, Mohapatra was the driving force behind establishing an interdisciplinary Center for Research and Education in Nanobioengineering (CREN) at USF. The center brings together faculty, staff, clinicians and students as well as local companies and area hospitals to conduct research in the areas of nanomedicine, tissue engineering and cell technology.

Mohapatra also led the efforts to create the state-of-the-art Master of Science program at USF in Pharmaceutical Nanotechnology, which trains students in the advances of nanomaterials and nanoprocesses with application to drug delivery, diagnosis, treatment monitoring, personalized medicine and more.

Working in collaboration with his wife and colleague, USF Professor Dr. Subhra Mohapatra in the Department of Molecular Medicine, the duo also made significant breakthroughs in the advancement of personalized cancer treatments. Their innovative nanofiber technology platform has made it possible to culture tumors on discs for the purposes of studying and isolating cancer stem cells, which are often drug-resistant and the cause of disease relapse.

Using this technology, anti-cancer drugs are screened for effectiveness and nanoparticles are customized to deliver diverse drug payloads, greatly increasing the chance for patients to achieve remission. The team also pioneered and patented a novel treatment for lung cancer, using a stem cell nanotechnology system that delivers RSV to the cancer cells where the virus infects and kills the cancer cells.

Mohapatra also made pioneering discoveries in the treatment of Traumatic Brain Injury especially in relation to immune control in TBI inflammation. He and his collaborators developed and patented an anti-inflammatory nanoparticle system that delivers therapeutic genes, proteins and drugs to the affected area of the brain as well as for TBI-induced vision dysfunction.

Mohapatra co-founded the USF spinout company Transgenex Nanobiotech, Inc., which has pioneered a targeted cocrystal engineering platform and has develop several pipeline drugs for anti-cancer and anti-inflammatory diseases. He is also the founder of the bi-annual Nano-Bio Collaborative International Conference and is the founding President of the Florida Association for Nanobiotechnology, which seeks to advance nanotechnology and nanoscience research.

He has published over 200 articles and holds over 40 U.S. and foreign patents. In 2014, Mohapatra was inducted into the inaugural class of the Florida Inventors Hall of Fame. He is also a Fellow of the National Academy of Inventors, American Institute for Medical and Biological Engineering and the American Association for the Advancement of Science.