NASA testing USF technology for possible use on the moon

A technology created at USF could help enable the establishment of a permanent presence on the moon. Civil and Environmental Engineering Professor Daniel Yeh has been collaborating with NASA to develop a system that converts human waste into fertilizer and water, which would allow astronauts to grow fresh vegetables in space in a more sustainable way. NASA’s lunar exploration program, Artemis, is working to return humans to the moon in 2024. NASA landed the first man on the moon with Apollo 11 in 1969, and Artemis is the first time a woman is set to land on the moon. It puts the agency one step closer to sending astronauts to Mars.

Yeh’s invention, the Organic Processor Assembly, will be sent to NASA’s Kennedy Space Center in mid-August to test its effectiveness under simulated space mission conditions. It uses some of the same principles of his NEWGenerator resource recovery machine, which converts human waste into clean water, energy and fertilizer, and is currently being used in India and South Africa. The Organic Processor Assembly is a closed system, the size a miniature fridge, and automatically extracts nutrients directly from the toilet.

“Over the years, our team has gotten pretty good at coming up with technologies that work well on Earth,” Yeh said. “Developing resource recovery solutions for space was something new. It presented a whole new series of design challenges to overcome, such as those related to mass, volume, modularity and reduced gravity.” 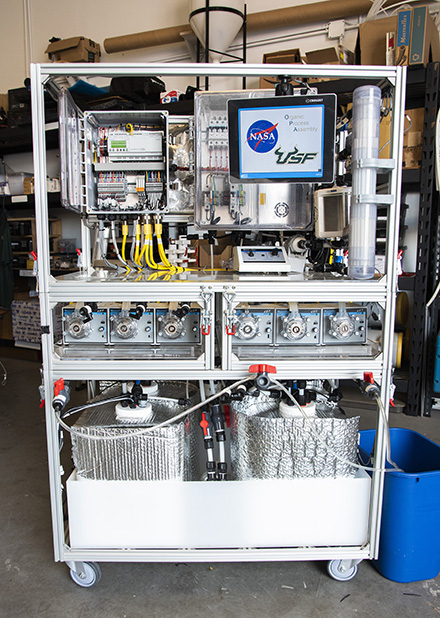 Building on previous experiments, astronauts aboard the International Space Station have grown small amounts of produce, such as lettuces, cabbage, and kale, since 2014 through the Vegetable Production System, known as VEGGIE. The space garden is about the size of carry-on luggage and can hold six plants using pillow-like containers filled with a clay-based soil and fertilizer. Astronauts have consumed some of the plants they have grown, and plant researchers have used the rest to understand how living things grow under microgravity conditions.

Over the last decade, there have been nearly 40 expeditions to the International Space Station, which is in orbit more than 250 milesabove Earth, traveling faster than 17,000 miles per hour. Comparatively, the moon is 238,900 miles away, making it far more difficult to restock supplies and nearly impossible to dump waste. Mars, which takes six-eight months to get to, will be even more challenging for resupply. The Organic Processor Assembly aims to eliminate the need to transport fertilizer, as it is created on-site. The sustainable wastewater treatment system is designed for easy self-maintenance and has the capacity to support a larger volume of food production on an ongoing basis. Astronauts have relied on eating prepackaged foods. This new technology facilitates growing fresh produce to supplement astronauts’ diet on long duration missions, which is also great for psychological reasons, especially since living things can serve as a reminder of home.

“NASA can only resupply a limited mass and volume to the moon and Mars habitats. This limitation forces research advancements to provide a reliable, closed-loop system between food consumption and production,” said NASA’s Principal Investigator Luke Roberson. “With the OPA technology, we’re investigating if we can sustainably begin recycling human wastewater resources into potable water and fertilizer nutrients. There is a big difference between a fresh and canned strawberry in both nutrient content and interaction with your senses.”

Once the Organic Processor Assembly arrives at the Kennedy Space Center, it will be installed in Roberson’s lab and fed synthetic wastewater to mimic the use of an astronaut crew of four. The water will process through the system and then be tested for water quality, which is expected to be high in nutrients. Excess nutrients will then be conditioned through a downstream algae bioreactor so the fertilizer can be optimally fed to plants. 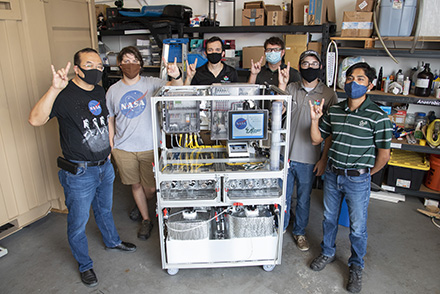 The Organic Processor Assembly will then be tested for compatibility with other existing and upcoming life support technologies that help solve the critical need for clean water, food resources and sustainable management of human waste.

Earlier this year, Yeh, Roberson, USF graduate student Talon Bullard and former USF postdoc Melanie Pickett won the Kennedy Space Center’s 2020 Sustainable Environmental Awareness Award. A patent has also been issued and other patents are pending. So far, Yeh has received more than $340,000 in grant funding from NASA. This includes a seed grant awarded in 2018 that allowed Bullard to start developing a prototype for the Organic Processor Assembly. NASA is expected to decide if the technology will be sent to the moon over the next two-three years. A second unit of the Organic Processor Assembly will remain at USF for further testing.