A new national TV commercial produced by the University of South Florida is now airing during American Athletic Conference football games. The ad features researchers involved in two high-profile projects and a USF student as the voiceover talent. 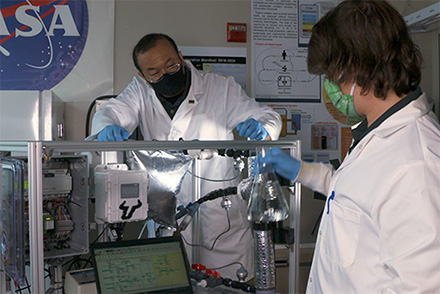 Civil and environmental engineering Professor Daniel Yeh and his graduate student Talon Bullard can be seen working on their invention, the Organic Processor Assembly. It converts human waste into fertilizer and water, allowing astronauts to grow fresh vegetables in space. It’s being tested by principle investigator Luke Roberson at the Kennedy Space Center for its effectiveness under simulated space mission conditions. NASA is considering the technology for its lunar exploration program, Artemis, which is working to return humans to the moon in 2024. The Organic Processor Assembly uses some of the same principles of Yeh’s other invention, the NEWgenerator, which is a wastewater treatment system built to address global sanitation concerns. 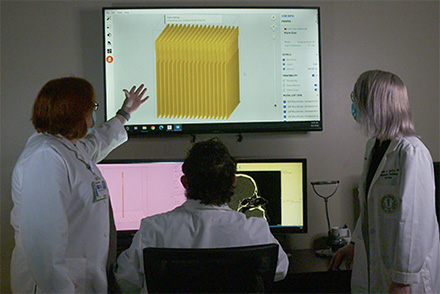 The 30-second spot also features Summer Decker, associate professor in the USF Health Morsani College of Medicine and director of 3D Clinical Applications, and biomedical engineer Jonathan Ford. They designed 3D-printed nasal swabs during the early months of the global COVID-19 pandemic when the availability of testing kits was extremely limited. The researchers, who work in USF Health’s Department of Radiology, developed the prototype in collaboration with Tampa General Hospital, Formlabs, a leading 3D printing company, and Northwell Health, which helped confirm clinical efficacy. Nearly 40 million nasal swabs have since been created and are now being used across the globe.

College of the Arts senior Jada Griffin plays a prominent role in the commercial as her voice offers an authentic quality that is reflective of USF’s student body. Additional students were also included in a brief montaged display of the traditional “Go Bulls!” hand sign, which was recorded outside the Marshall Student Center.