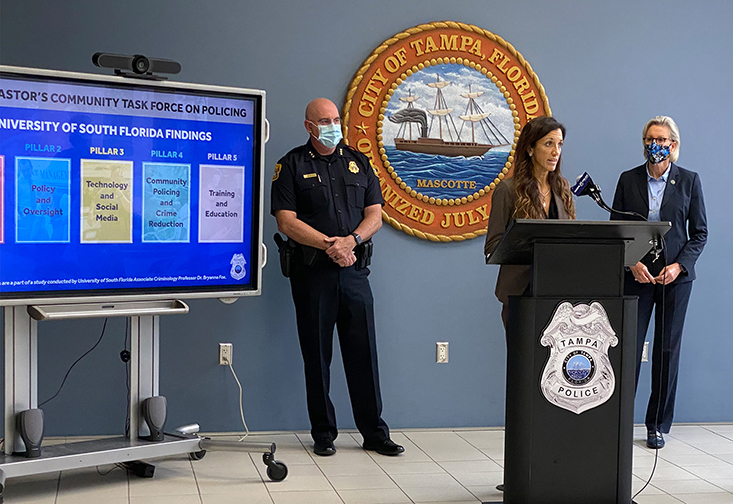 The University of South Florida is assisting Tampa Mayor Jane Castor and the Tampa Police Department’s efforts to build strong relationships between officers and the community. The city of Tampa and USF criminology Professor Bryanna Fox have agreed to a formal 18-month partnership following her leadership on the Mayor's Community Task Force on Policing.

Fox was selected to make recommendations based on feedback from the 40-member task force formed in response to ongoing protests regarding police treatment of members of Black communities across Tampa. Fox's report, which she submitted to the task force on Aug. 29, outlines 17 key findings that can improve police-community relations and enhance trust in police among community members. The partnership tasks Fox with providing oversight of new police policies and procedures, ensuring department leaders are held accountable for their implementation, and will evaluate the effects of the programs and policies.

“We just wanted to ensure that we have that objectivity and that assurance that this wasn’t an exercise,” Castor said. “That we weren’t going to check a box and move on, that we listened, and we heard and we’re going to implement these findings that will not only improve the Tampa Police Department but improve that relationship between the residents.”

During a news conference, Tampa Police Chief Brian Dugan announced the department has already started implementing several of Fox’s recommendations, such as requiring that a no-knock warrant to be approved by a judge and by the chief of police. The police tactic has been widely criticized following the death of Breonna Taylor, who was killed during a no-knock police raid in Louisville. Tampa Police also just updated its use-of-force policy to include language that a police officer is required to de-escalate a situation when possible and will be pursuing department-wide de-escalation training.

“When you look at many of the events that are spurring so much controversy, these are incidents that could probably be deescalated and we are going to put a focus on our training to deescalate every situation,” Dugan said.

“It’s incredibly important to me because this just reinforces that this is long-term, that this is for our community, for our department and also for research and evaluation," Fox said. "Making sure it’s working the way we think it is and the way it should be.”

A USF graduate student will assist Fox in providing oversight and ensuring the effectiveness of these procedures. They’ll be meeting regularly with department leaders who oversee training, as well as those responsible for social media and communications, to help assist in their efforts to reinforce their commitment to the community. They’ll also participate in ride-alongs to help police build positive, non-enforcement, engagement.

Castor said given the deep concern over social justice and the need for nationwide improvements, the Tampa Bay Lightning and Tampa Bay Buccaneers will support the implementation, oversight and evaluation of Fox’s findings.