USF rises to No. 4 in the nation among ‘Golden Age Universities’ 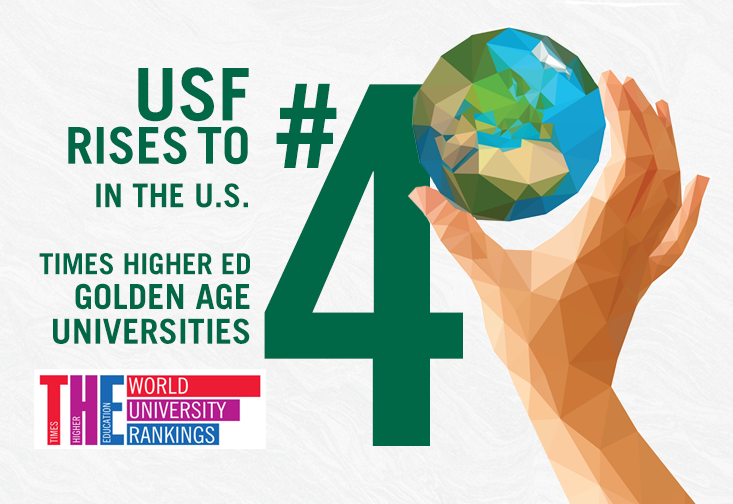 For the first time, the University of South Florida (USF) has climbed into the top five nationally among all private and public “Golden Age Universities,” according to new rankings released this week by the U.K.-based Times Higher Education (THE).  USF is now No. 4, up from No. 7 last year, in the rankings that compare the performance of institutions founded between 1945 and 1966. Relative to all institutions around the world, USF climbed 11 places to No. 27, the most improved of any university in the U.S.

“We are proud to be recognized as a national leader among ‘Golden Age Universities’ particularly since it reflects the work of our world-class faculty and our shared commitment to high-impact research and student success,” USF Provost and Executive Vice President Ralph Wilcox said.  “Our community of talented, dedicated scholars embodies both the innovative, global-minded spirit and drive necessary for younger institutions to create and apply knowledge that shapes the future.”

As a global research university dedicated to student success, THE’s ranking further underscores USF’s unprecedented upward trajectory toward its goal of eligibility for membership in the prestigious Association of American Universities (AAU).  USF ranks the highest among non-AAU institutions and higher than AAU member Stony Brook University.  USF also ranks first among institutions in the state of Florida.

USF has distinguished itself through critical metrics that determine global university influence in the THE rankings.  USF ranks second in the nation for Industry Outcome, measuring the real-world transfer and impact of university research and scholarship, and fourth in the nation for Citation Score, which determines the global influence, relevance and application of USF-based research.  The university also performs competitively in Teaching, Research, and International Outlook, which gauges university attraction, research partnerships and publications with international colleagues.

THE considers younger universities such as USF to represent “new frontiers for university expansion and increased research investment.”  Golden Age universities are ranked according to the same standards THE uses to rank World Universities, including those much older than USF.