On Feb. 7, the City of Tampa hosted its fifth Super Bowl. This time around, the event brought even more excitement to the region as the Tampa Bay Buccaneers became NFL champions, defeating the Kansas City Chiefs 31-9. The big game was played at Raymond James Stadium, home to the University of South Florida Bulls football team, which was just one of many connections between USF and Super Bowl LV. 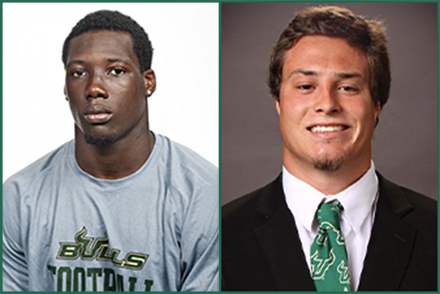 Two former USF football players went head-to-head as Buccaneers’ defensive lineman Jason Pierre-Paul lined up across from Kansas City Chiefs' center Austin Reiter. Pierre-Paul transferred to USF in 2009 and played one season with the Bulls in which he was named First Team All-American by Pro Football Weekly. An iron man, Reiter started all 12 games in each of his last three seasons with the Bulls and was named a Rimington Award candidate (given to the best center in college football) in his junior and senior years.

The Tampa Bay Super Bowl LV Host Committee, which acts as the direct liaison to the NFL for the region’s collective hosting effort, is another place where current and former USF Bulls made their mark on this year’s championship game. 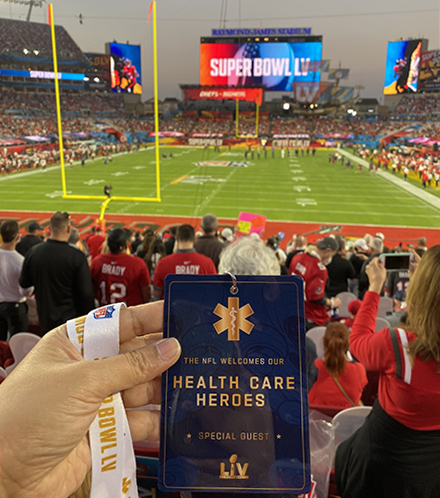 Members of USF Health were also be on hand to enjoy the Super Bowl as part of the 7,500 vaccinated health care workers the NFL invited to the game, a majority of whom represented Tampa Bay hospitals and health care systems.

"These dedicated health care workers continue to put their own lives at risk to serve others, and we owe them our ongoing gratitude," National Football League Commissioner Rodger Goodell said on NFL.com. "We hope in a small way that this initiative will inspire our country and recognize these true American heroes. This is also an opportunity to promote the importance of vaccination and appropriate health practices, including wearing masks in public settings." 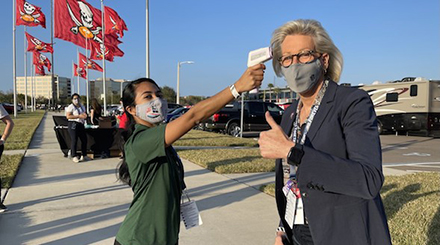 USF’s Community Emergency Response Team (CERT), made up of students and alumni from the College of Public Health, were on hand to provide health screenings for staff, vendors and guests attending the Super Bowl Experience and VIP pre-game events. CERT is a volunteer organization dedicated to promoting, training and providing education on emergency preparedness within USF and its surrounding communities.

“This has been a mind-blowing experience for me,” said Maria Paula Ibarcena-Woll, a senior majoring in public health and CERT’s health and medical officer. “I’ve applied what I’ve learned in class to the real world, and now I have a better understanding of how essential public health is during such a dynamic and large-scale event like the Super Bowl.”

The NFL and Tampa Bay Super Bowl LV Host Committee are teaming up to ensure the big game has a long-lasting impact on the local community. A $2 million investment will focus on pillars that best reflect the needs of the region, including health and wellness, food insecurity, childhood education, sustainability, and systemic justice.

Through this commitment, the Forever 55 Legacy Program is awarding $10,000 grants to 28 local nonprofit organizations, including the USF’s Black Leadership Network, a partnership-based group focused on engaging the community and enhancing educational and leadership opportunities for Black and African American students.

Founded in 2016, the Black Leadership Network creates mentorship opportunities, connecting its scholars to community leaders, and matching incoming students with upperclassmen to guide and support them as they begin their college careers. The Forever 55 grant provides the opportunity to expand programming to include students in grades K-12, an initiative that will help USF recruit and retain local talent.

“This is a really important part of building the bridge between the university and the Black and African American community here in Tampa,” said Black Leadership Network Program Director Walter Jennings. “By connecting elementary and high school students with our scholars, we’re able to provide them with a tangible example of what can be.”

USF recently launched a new interdisciplinary center dedicated to serving Tampa Bay as the major training and knowledge hub for issues related to social and criminal justice. The Center for Justice Research & Policy unites scholars and practitioners from colleges across USF’s three campuses, area law enforcement agencies and community advocates. Together, they provide learning opportunities for students, collaborative community-engaged research and actionable, evidence-based solutions to address some of the justice system’s greatest challenges.

The Tampa Bay Buccaneers, Tampa Bay Lightning and Tampa Bay Rays/Tampa Bay Rowdies organizations have each provided a $25,000 gift to the USF Foundation to support projects involving the evaluation and implementation of police reform. The teams have publicly expressed concerns over social injustices in the Black community.

“The Tampa Bay Buccaneers are proud to support the new USF Center for Justice Research & Policy,” said Darcie Glazer Kassewitz, Tampa Bay Buccaneers co-owner. “Our players and staff are steadfast in their commitment to creating programs and enhancing initiatives that reverse the course of systemic injustice. It takes all of us to foster an equitable society, and we will continue to work hand in hand with our community partners to implement purposeful change throughout Tampa Bay.”

Since the last time Tampa hosted the Super Bowl in 2009, the city has completed several major revitalization projects. Significant improvements were made to Curtis Hixon Waterfront Park, the Riverwalk expansion gave visitors a way to move from one end of the city to the other without hopping in their car or hailing a taxi, and significant progress has been made in the development of Water Street Tampa, new home to the USF Health Morsani College of Medicine and Heart Institute. As the city continues to grow, the USF Center for Urban Transportation Research has been actively involved in helping improve pedestrian and traffic safety. Researchers have collaborated with Tampa leaders on a number of projects, such as evaluating the e-scooter sharing program, development of public transportation apps and studying the effectiveness of autonomous vehicles.