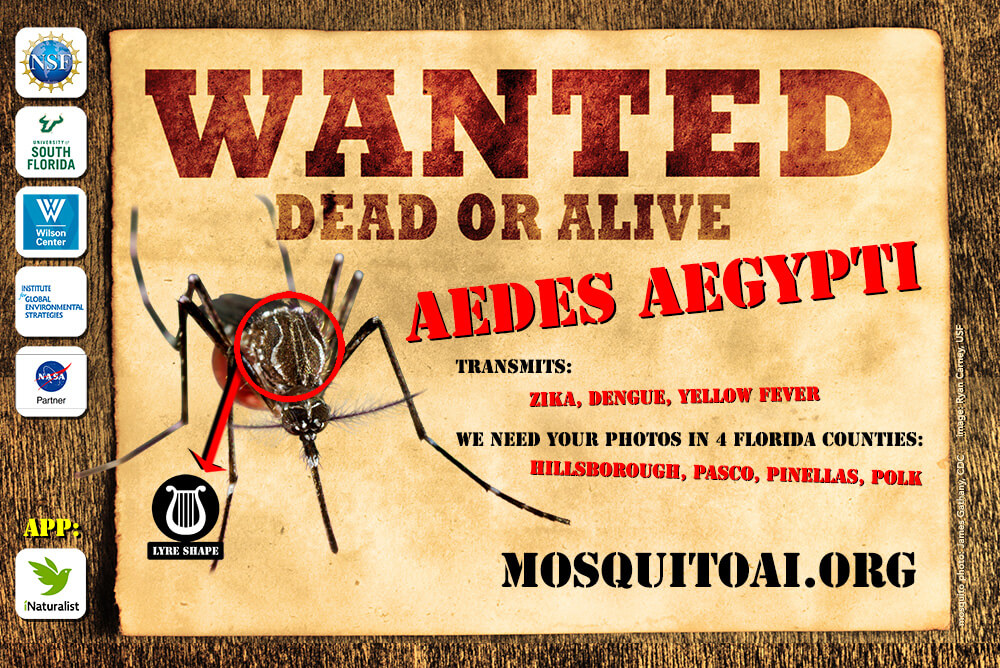 USF researchers have launched a social media campaign that invites citizen scientists to upload images of mosquitoes found in the Tampa Bay region to the iNaturalist platform, a smartphone app. The app will automatically identify disease-carrying species such as Aedes aegypti, a known transmitter of Zika, dengue and yellow fever.

This is the next step in a multi-disciplinary effort led by Ryan Carney, assistant professor of integrative biology and Sriram Chellappan, professor of computer science and engineering. The project is funded by a four-year grant from the National Science Foundation. The goal is to build a robust image database that identifies mosquitoes and monitors their habitat by using an integrative approach that requires many helping hands, which Carney calls “citizen epidemiology,” where citizen scientists and students participate as data collectors.

“We need a lot of images for the AI training. Volume is really key, the more data you feed these algorithms, the better they get,” Carney said.

The mosquito images, along with details about their habitat, are essential to train the AI’s algorithm, which categorizes the anatomical components of the insect and matches them with known characteristics of Aedes aegypti. Over time, this collection of data will better inform mosquito habitat and disease prediction maps with unprecedented detail.

The data will validate a local habitat model of potential risk areas and will later be developed into a Geographic Information System (GIS) dashboard, similar to the Global Learning and Observations to benefit the Environment (GLOBE) Program’s website. 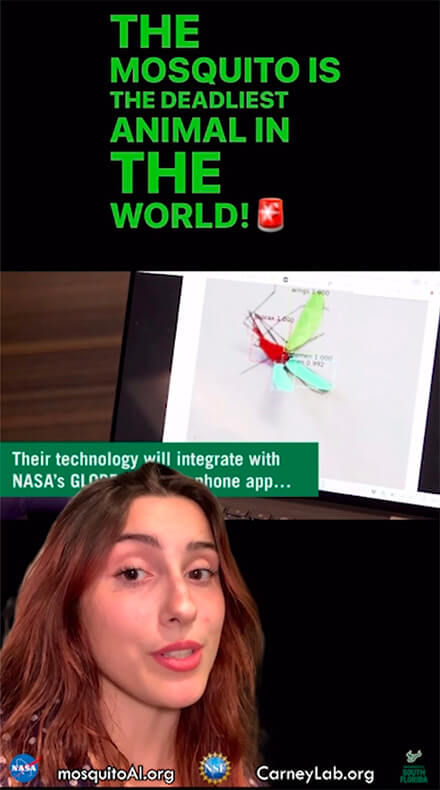 Students have been instrumental in building the AI mosquito project.

“There’s definitely a learning curve to producing the videos because of the editing involved, but it's been a great experience and I’ve learned a lot,” Rivera said.

Rivera’s videos are helping users learn how to photograph mosquitoes with smartphones, use the app, and even build mosquito traps. She is also working with communications teams at NASA Earth and the GLOBE Program to use her TikTok-style videos to invite new citizen scientists to participate.

On the app side, graduate student David Durieux has recruited hundreds of iNaturalist superusers, posting updates and mosquito observations to the project journal.

“It’s really been amazing to be a part of this and grow as a result of this experience,” Mapes said. “From just helping out on a project, to writing my thesis, to having a larger role, has been really awesome.”

Mapes is now working at the Woodrow Wilson Center and using the datasets collected in the iNaturalist, Mosquito Alert and Mosquito Habitat Mapper apps to develop a GIS dashboard. The dashboard will allow users to see photos of observed mosquitoes along with habitat details.

Besides working to locate Tampa Bay’s Aedes aegypti mosquito and its habitat, researchers are also concerned with newer invasive species and future threats in other parts of Florida and beyond. Carney worries about the Aedes scapularis, a recent arrival to the Miami-Dade area, and two other species that may potentially invade Florida and have already been detected in the Caribbean.

“One of the overarching themes of our NSF project is building artificial intelligence and surveillance capacity using citizen science smartphone images, which can be used in the training of the AI,” Carney said.

Research positions for this project are now available for a postdoctoral student, masters student and an undergraduate student. Interested parties can inquire at CarneyLab.org.