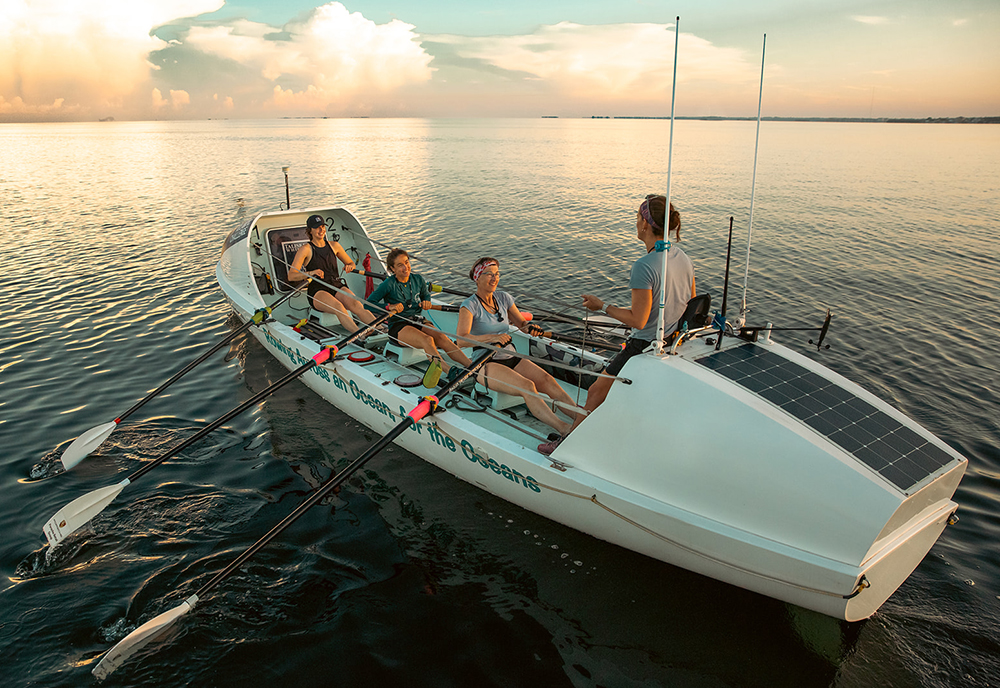 Salty Science will race in the 2023 Talisker Whisky Atlantic Challenge.

Integrative biology Professor Chantale Bégin is preparing for what is called “the world’s toughest row.” The Talisker Whisky Atlantic Challenge is an annual race to row 3,000 miles from Spain’s Canary Islands to English Harbour in Antigua and Barbuda. Bégin’s team, Salty Science, includes Lauren Shea and Noelle Helder, two of her former USF students, and Isabelle Côté, her doctoral advisor at Simon Fraser University. Salty Science is dedicating its race to marine conservation to support training the next generation of diverse scientists who will develop creative solutions to global ocean challenges. 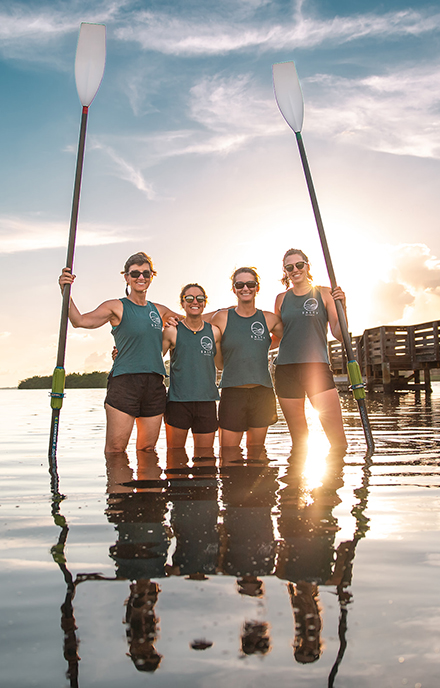 Salty Science signed up for the challenge having no experience in rowing, but the multigenerational team of marine scientists shares a love for the water and pushing their limits. The team has a never-ending sense of adventure and is made up of certified scuba divers, licensed captains, triathlon racers and endurance runners.

“I’m stoked to combine my passion for marine conservation with some solid type II fun by rowing across the Atlantic,” said Helder, who graduated from USF in 2017. “I’m excited to be a part of this science dream team, working towards this mission with women who have inspired me throughout my career.”

The team decided to commit more than two years to meticulously organize, train and fundraise before racing in December 2023. For the first year and a half of preparation, the team worked on their fitness while also learning to row. Since Salty Science is spread out across Florida, Alaska, Norway and Canada, the team mostly meets and trains virtually. Adding to the mix, this year, they hired a personal trainer based out of Vermont to lead them in strength training and targeted rowing exercises. “Since we’ve never rowed before, we had to learn how to row properly and get our basic stroke corrected so we don’t hurt ourselves and so that we are as efficient as possible,” Bégin said.

Salty Science purchased a pre-owned ocean rowing boat with a track record of three successful trips across the Atlantic. The boat will weigh about 5,000 pounds once it’s packed with equipment and supplies for their six- to eight-week journey. When the team finally came together to practice in August, Bégin recalls seeing how the individual training paid off, and the team had several great rowing outings on their boat in the Gulf of Mexico. To compete, the race organizer, Atlantic Campaigns, requires each team to log a total of 120 hours of ocean rowing, with 72 of those hours out in open water and 24 hours spent overnight. The team also must prove they can operate the water maker and autopilot and run emergency drills.

Another part of the team’s preparation is assigning each member a specific role. Two will be the medical experts who will receive extensive medical training and build the boat’s custom medical kit. The assigned nutritionist will pack, in an organized fashion, dehydrated meals with enough calories for eight weeks for each member. The electronics specialist will study all the technical manuals for the equipment on board. During the race, two members will row at a time in two-hour increments followed by two hours off the oars, around the clock. When not rowing, teammates can rest in the sleeper cabins or take care of their assigned roles ranging from checking batteries, cleaning solar panels from salt or the boat’s hull from barnacles, to making water or rehydrating meals.

According to Atlantic Campaigns, as many as 30 teams are selected to compete each year and each can be made up of one to five crew members. During the rigorous race, rowers will experience waves that can measure up to 20 feet high and they will battle sleep deprivation, salt sores and physical extremes. Most teams capsize at least once during their journey. By the end of the race, each team will have rowed over 1.5 million oar strokes and each rower will have burned over 5,000 calories per day and lost about 18 pounds.

The fastest row across the Atlantic was in 2017 by The Four Oarsmen from Great Britain, who finished in 29 days, 14 hours and 34 minutes. The record for the fastest female team of four is held by a Chinese team, Kung Fu Cha Cha, finishing the 2017 challenge in 34 days, 13 hours and 13 minutes. Fans can track race progress online from a live map and then watch a livestream of each team’s arrival from Atlantic Campaigns’ social media.

Bégin admits that it will be tough to be away for months from her two young children with limited communication, but the biggest challenge will be what the team can’t easily prepare for, like equipment failures or injuries. “That’s why we are dedicating so much time to preparing the boat, training and making ourselves as strong as possible because that’s something we can control,” Bégin said.

Learn more about integrative biology programs at USF and how to support College of Marine Science research initiatives.