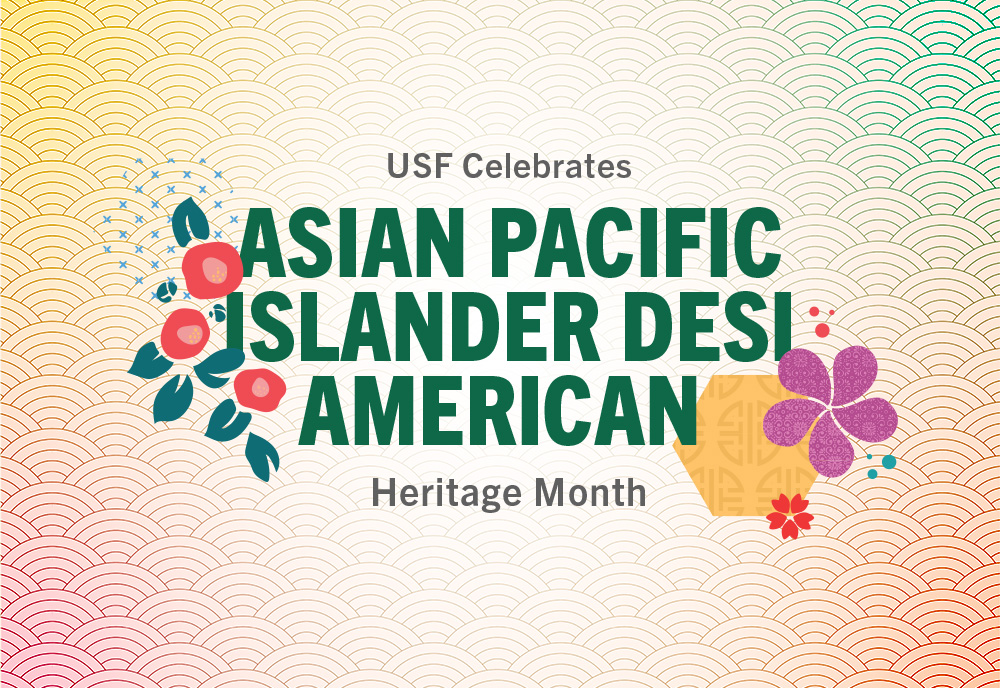 Celebrating the culture and many accomplishments of USF's APIDA community

This month, the University of South Florida is proud to celebrate Asian Pacific Islander Desi American (APIDA) Heritage Month, a nationally recognized observance that honors the history, heritage and contributions of Asians, Southeast Asians and Pacific Islanders in the U.S. The month of May was chosen to commemorate the immigration of the first Japanese to the U.S. on May 7, 1843 and to recognize the completion of the transcontinental railroad on May 10, 1869 by Chinese immigrants who laid most of the track.

APIDA represents a vast pan-ethnic global community that includes people from all of Asia – the world’s largest and most populous continent – including India and the Pacific islands of Melanesia, Micronesia and Polynesia.

Several of these organizations worked with the Office of Multicultural Affairs (OMA) to host a series of APIDA events in April – allowing students to participate before the end of the spring semester. The events were an opportunity to increase the visibility of the APIDA culture and population to the broader USF community. 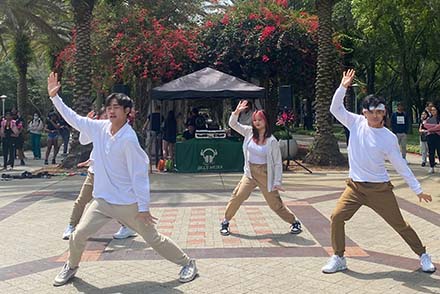 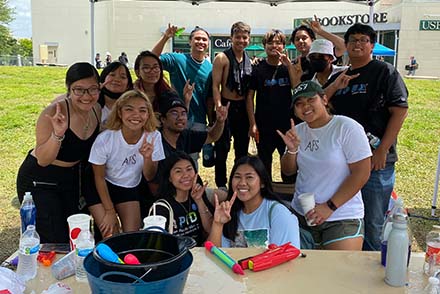 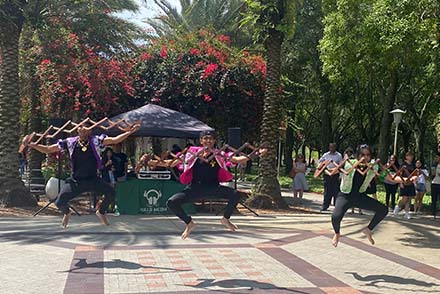 Christian Fajardo, a past member of the Association of Filipino Students, helped kick off the APIDA heritage events at the Bull Market, located outside the Marshall Student Center. Fajardo is executive director of Journey to the East, a weeklong student-led event held each fall to celebrate Asian culture. Fajardo and his Journey to the East peers have been among the student leaders looking to USF for support and solidarity in the wake of last year’s increase in bias incidents and hate crimes targeting Asian Americans.

“As an Asian American, it feels great to know that we have resources like the Office of Multicultural Affairs for support and to provide a safe space for us,” said Fajardo, who moved to the U.S. from the Philippines in 2016. “By working with student organizations at USF, I’ve realized how important my culture is to me – and I want to help preserve it for future generations.” 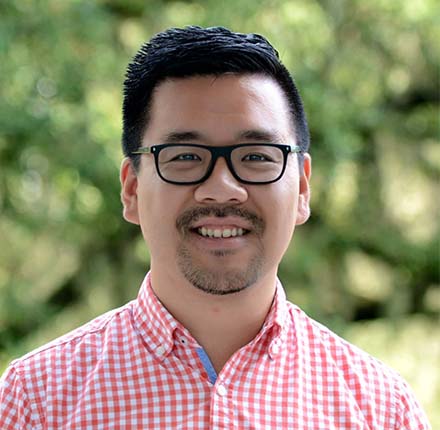 USF employees representing the APIDA community also have been moved to increase synergies and networking opportunities. Kevin Lee, academic advisor in the Judy Genshaft Honors College and an active voice in USF’s APIDA community, is pleased to see the increased momentum by students, faculty and staff across USF. Lee has been working with colleagues and the administration on ways to support and celebrate the APIDA community university wide. Currently a member of the Presidential Advisory Committee on Issues of Sexual Orientation and Gender Identity, Lee also has been working over the last two years to identify and meet regularly with members of the APIDA community.

“There’s definitely a need and a desire among faculty, staff and students in the APIDA community across all three campuses and USF Health,” Lee said, adding that he has seen interest and participation in meeting as an APIDA community steadily increase. This year, Lee hopes to formalize with university leadership the formation of an APIDA faculty and staff advisory group.

Meanwhile, APIDA Heritage Month is a wonderful time to celebrate with pride the many accomplishments of USF’s APIDA community.

Select faculty who represent the APIDA community across One USF 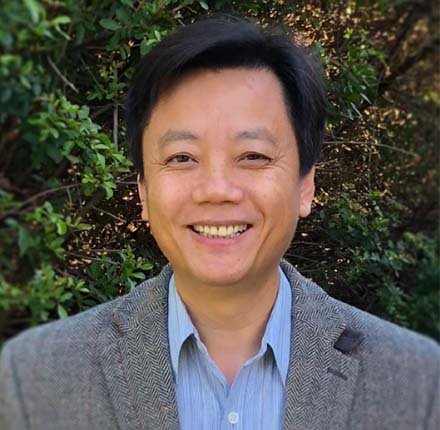 Chuanmin Hu, professor of optical oceanography in the College of Marine Science, who also directs the Optical Oceanography Lab, was recently named a Fellow of the American Association for the Advancement of Science. The award recognizes his distinguished contributions to the field of marine science, particularly for the discovery of the “world’s largest seaweed bloom” and pioneering research in remote sensing algorithms, data products and applications.

Hu’s discovery of the Great Atlantic Sargassum Belt – a biomass of brown seaweed that extends from the west coast of Africa to the Gulf of Mexico – made the Guinness World Records and was selected by Discover magazine as one of the top 50 discoveries in 2019. The Virtual Buoy System, Integrated Redtide Information System and Sargassum Watch System, developed by the Hu lab, have served more than 60 countries. 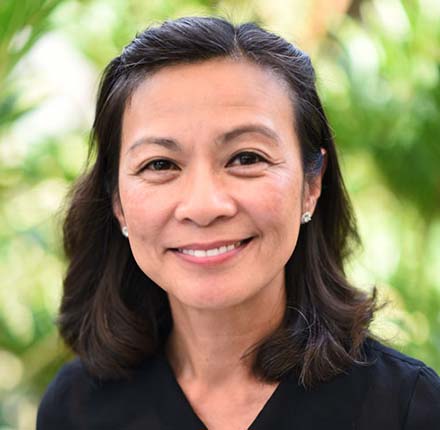 Fawn Ngo, associate professor in the Department of Criminology, is among the researchers at USF’s Trafficking in Persons – Risk to Resilience Research Lab, helping sex-trafficking victims through a court program that offers housing, job training, counseling and other services. The lab’s work could become a model for similar programming around the country.

Related to her work, Ngo says being Asian American offers a distinctive racial, ethnic and cultural identity. “While we face many challenges in our current society, especially in the face of the pandemic and surges of discrimination, we must also use APIDA Heritage Month to remember that living in a society filled with different backgrounds makes our world richer,” Ngo said. 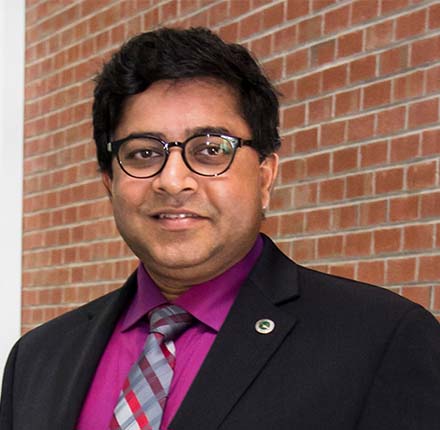 Sudeep Sarkar, professor and chair of the USF Department of Computer Science and Engineering

Sudeep Sarkar is professor and chair of the Department of Computer Science and Engineering. He has more than 25 years of experience conducting and directing fundamental research in computer vision, predictive learning, biometrics and artificial intelligence. He is a member of the Academy of Science, Engineering, and Medicine of Florida, and Fellows of the American Association for the Advancement of Science, National Academy of Inventors, Institute of Electrical and Electronics Engineers, International Association for Pattern Recognition and the American Institute for Medical and Biological Engineering. Most recently, he was named a Fellow of the Asia-Pacific Artificial Intelligence Association.

Growing up in India, Sarkar says a verse from the Bhagavad Gita continues to influence him today. Roughly translated, the Hindu verse says, “You have a right to perform your prescribed duties, but you are not entitled to the fruits of your actions. Never consider yourself to be the cause of the results of your activities, nor be attached to inaction.”

“I try to live this out,” Sarkar said. “All the ‘accomplishments’ that you see are a result of the excellent students who have crossed paths with me.” 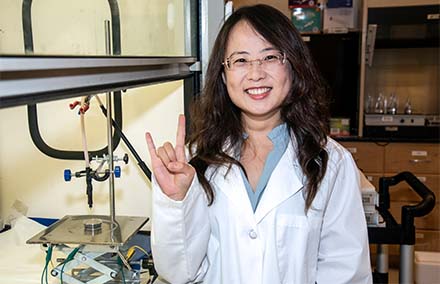 Ying (Sarah) Zhong, assistant professor in the Department of Mechanical Engineering, was one of this year’s Excellence in Innovation Award recipients for the technology she developed to safely reuse disposable face masks, made ubiquitous by COVID-19. Zhong’s NSF-funded and patent-pending technique addresses mask shortages and environmental waste and has drawn significant attention from the media and society. Also this year, Zhong received the CAREER Award, the National Science Foundation’s most prestigious awards in support of early career faculty who have the potential to serve as academic role models in research and education and to lead advances in the mission of their department or organization. 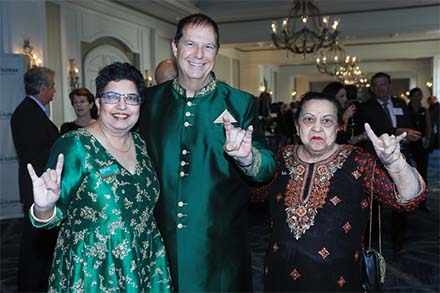 Drs. Anila and Mona Jain epitomize what it means to be ardent supporters of USF. Together, the USF alumnae will chair the 2022 Brunch on the Bay scholarship fundraiser at the USF Sarasota-Manatee campus. A physician and medical consultant, Dr. Anila Jain is vice chair of the USF Sarasota-Manatee campus board and holds numerous honors and distinctions recognizing her service and support of USF. Anila’s mother, Dr. Mona Jain, is a Fulbright scholar, winner of USF’s Distinguished Alumna Award and 2020 recipient of the College of Education’s Dean’s Lifetime Achievement Award. She has dedicated her career to the field of education and worked as a tireless advocate for her students.

Both are members of USF’s Women in Leadership & Philanthropy program where they provide mentorship and support to current USF students. The opportunity gives Mona the ability to continue her work in motivating people of all ages to continue their pursuit of knowledge, something instilled in her early in life in India.

Daughter Anila was born in India and moved with her family to the Sarasota-Manatee area when she was five years old. She’s proud to say that honoring her dual heritage – Indian and American – gives her the best of both worlds.

“I was fortunate — we had a Christmas tree and also celebrated Diwali, India’s festival of light,” Anila said. “My parents made sure that East and West cultures were intermingled, and it was perfect.”

As a student at USF, Anila said there were few other students from India, which inspires her today to reach out to international students, especially those from India, knowing that USF can feel like a long way from home.

“It can be hard for students,” Anila said, adding that while India’s culture prioritizes education, students and families often make significant sacrifices to attend a university in the U.S.

“I always make a point of talking to students to make sure they know that USF has lots of opportunities and resources,” Anila said. “They usually do very well.” 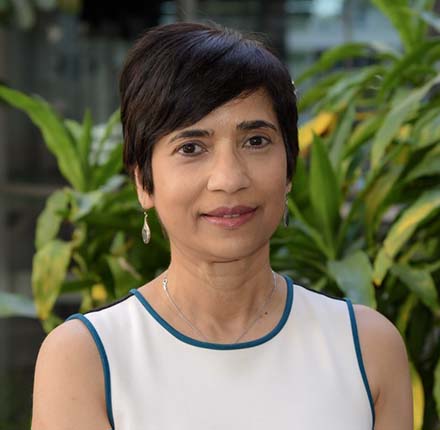 Born and raised in India, alumna Lynette Menezes began volunteering at a leprosy hospital as a high school student, witnessing firsthand the damaging effects of the disease, setting her course for a career in public health. After receiving her undergraduate and master’s degree from the University of Mumbai, she moved to the U.S. to join her husband and eagerly pursued her doctorate at the USF College of Public Health (COPH). Coming from Mumbai’s competitive environment, she credits peers and mentors at COPH for providing vital support. Menezes has been with the college ever since.

In 2021, her alma mater awarded Menezes the College of Public Health Outstanding Alumni Award, recognizing her exemplary service to the field of public health. Menezes serves as the assistant vice president and assistant dean for international affairs at the USF Health Morsani College of Medicine. In her roles, she’s been building and supporting international programs, faculty and student exchange in 38 countries. She also founded the international medicine scholarly concentration for medical students where she teaches global public health principles and pioneered a robust medical student exchange program between USF and 25 academic institutions in 14 countries. 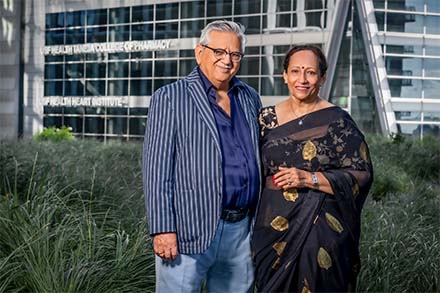 Jugal and Manju Taneja are known as the region’s “game changers” with a passion for education, improving health care and giving back to their communities. Their $10 million gift in 2019 from the Taneja Family Foundation to name the USF Health Taneja College of Pharmacy set a record as the largest philanthropic donation to a pharmacy school in the state of Florida.

Their own pharmaceutical company in Largo focuses on the innovative development of generic medications and antibiotics that are difficult to manufacture. Jugal Taneja has founded numerous successful companies in Florida, Ohio, New York and Great Britain. Manju Taneja also serves as a managing partner for several real estate companies. But their generosity in the Tampa Bay region will help USF transform and revolutionize health programs and the educational experience of USF pharmacy students.