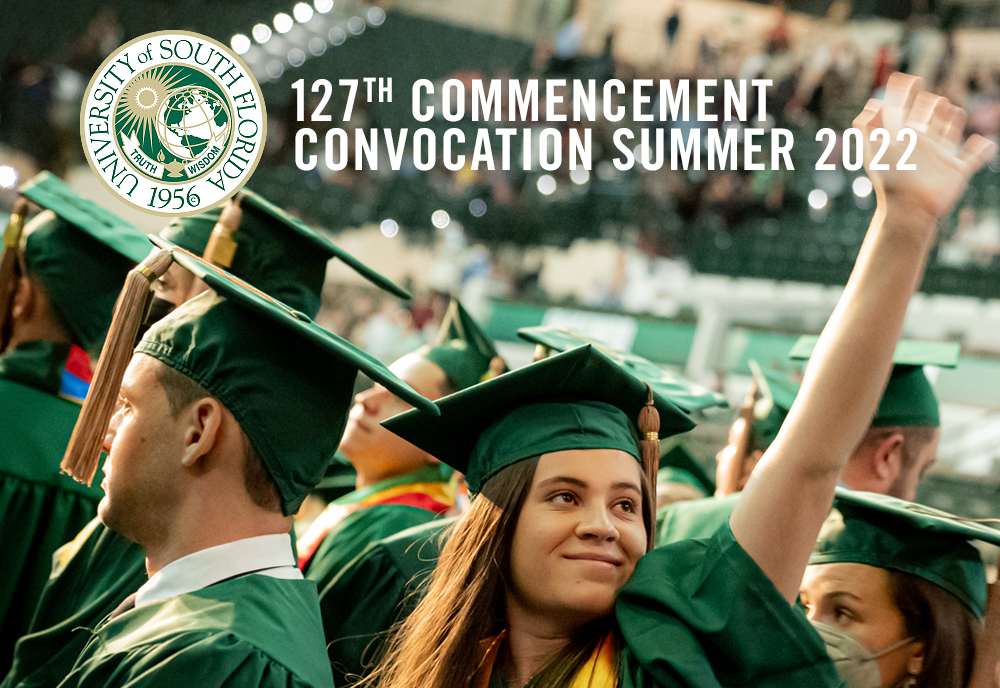 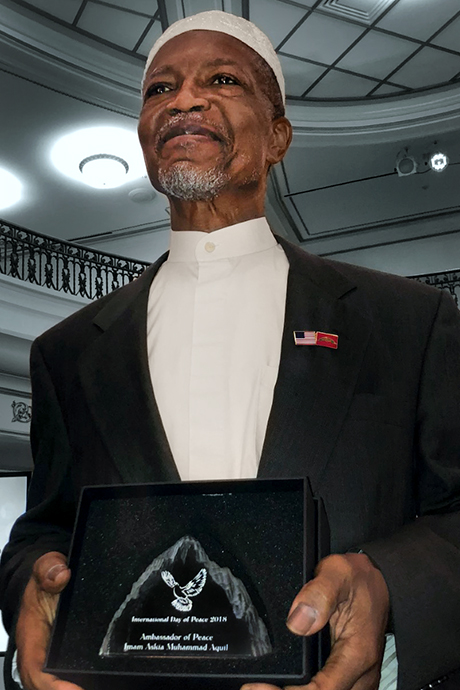 Askia Muhammad Aquil, formerly Otha Favors, enrolled at USF in 1966. He became a leader in civil rights activisim and founded the One-to-One Group, which brought together students and faculty to discuss race relations and social justice issues. Their work, in collaboration with the Black Student Union, resulted in the creation of a Department of Africana Studies. Aquil ended up leaving USF his senior year, but it was always his intention to return and complete his undergraduate degree. Fifty years later, Aquil is graduating at the age of 75 with a bachelor’s degree in general studies. 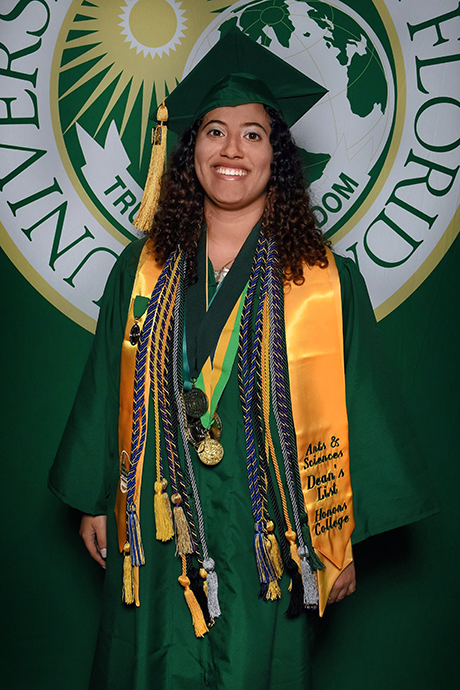 Originally from Canada, Natalie Nagib enrolled in an undergraduate-to-graduate pathway program at USF and graduated in the spring with a bachelor of science in biomedical sciences. For her international field experience, Nagib traveled to Japan and served as a research assistant at Gifu University, analyzing student health data to understand how students’ physical health, mental health and lifestyle have been impacted by the COVID-19 pandemic. After Nagib graduates with a master of public health in global health practice, she is off to medical school. 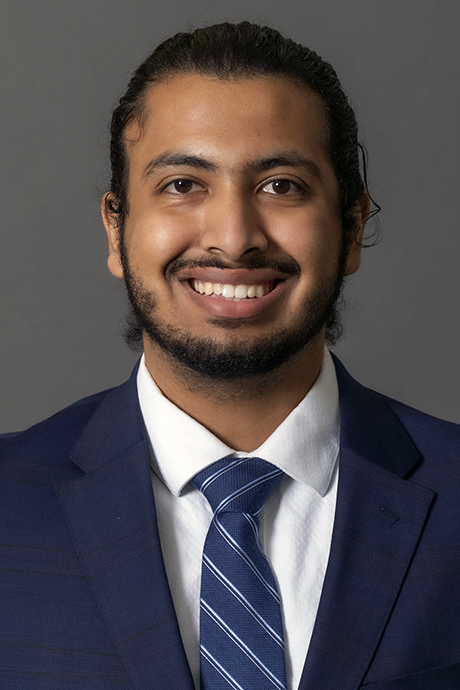 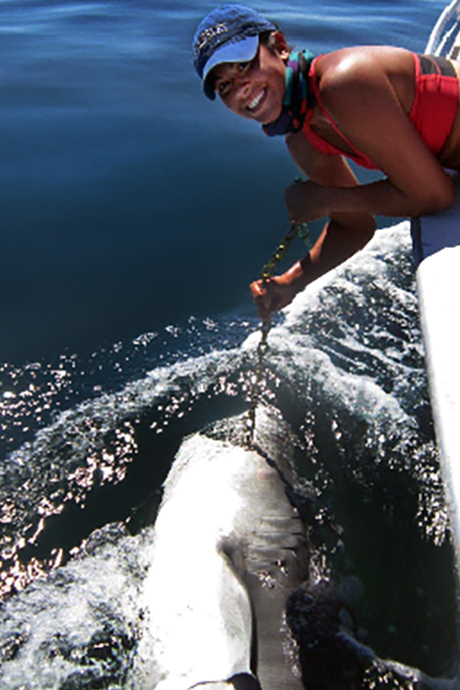 Growing up on the water, Alyssa Andres has always been fascinated by marine life. She chose USF to purse a doctorate in marine science so she could work with Brad Seibel, a professor at the USF College of Marine Science. For her dissertation, Andres researched how different shark species use energy and how environmental factors, such as rising temperature and decreasing ocean oxygen, influence such energy use and in turn, shark interaction with their habitat and ecosystem. Andres had to dive into the engineering realm to design, execute and build the special chambers she needed to study her species. 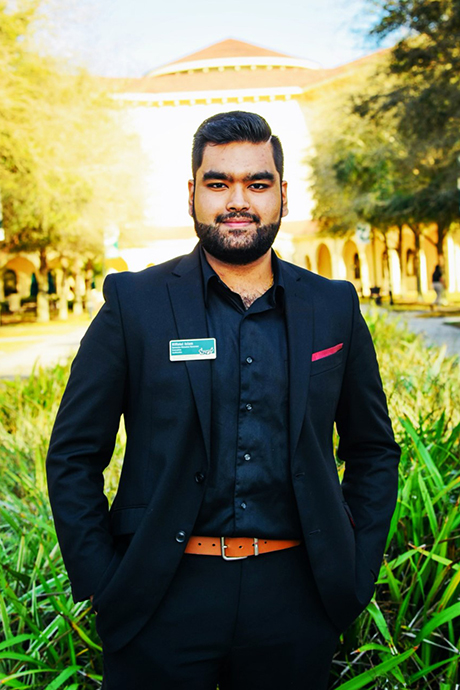 Born in Bangladesh and raised in Bradenton, Riffatul Islam witnessed extreme poverty during visits to his native country. This experience fueled Islam’s passion for helping people, and with a fascination for the human body, he knew at a young age that he wanted to become a physician. While pursing a bachelor of science in biology, Islam held several leadership positions, including student governor for the USF Sarasota-Manatee campus. Islam created initiatives and programs that unified the three campuses as OneUSF and helped to rejuvenate the Sarasota-Manatee campus after the onset of the COVID-19 pandemic. 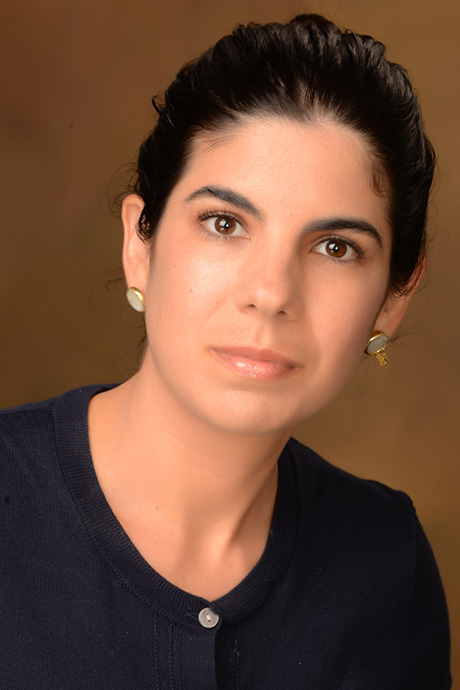 Inspired by her grandfather's entrepreneurial spirit and determination, Yesmin Delgado Alabart left Cuba at the age of 24 seeking opportunity and a brighter future. She worked to support herself full time while balancing course work, learning English along the way. Now Alabart will be graduating this summer with a bachelor’s degree in Accounting from USF’s St. Petersburg campus. She is doing so with a 4.0 GPA. She also has a coveted internship lined up with the global tax and consulting firm RSM and has been accepted into a master’s of Accountancy program with the goal of earning her CPA license. 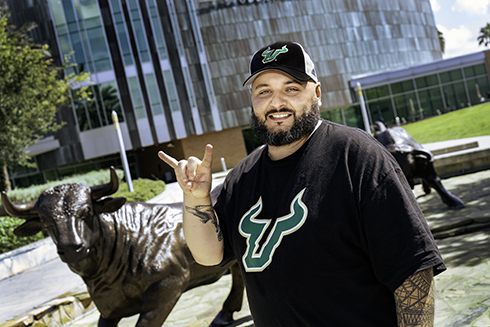 After serving in the Marine Corps for 12 years, Cliff McAfee had a difficult time finding his purpose. McAfee earned his associate degree and then transferred to USF, but had a difficult time juggling classwork with his responsibilities as a single parent, in addition to suffering from post-traumatic stress disorder and traumatic brain injury that stemmed from his time serving the Marines. Then, he found the support and camaraderie he needed through a group of veterans he met through to the USF Office of Veteran Success. McAfee started to thrive, becoming the vice president of the USF Student Veterans of America chapter, and discovering a perfect career fit in student affairs. 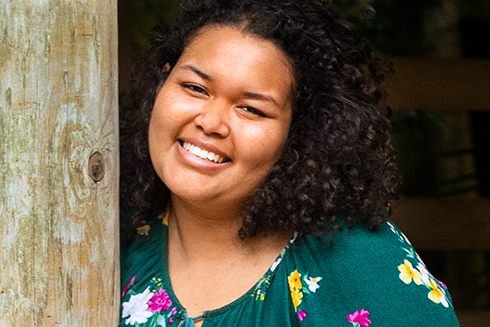 Tampa native Riyza Jose Morales started her academic journey as a Pizzo Bull right next to USF at Pizzo Elementary. She’d eventually grow up to be a USF Bull, earning a bachelor of arts degree in international studies in 2019. Jose Morales's experiences during the COVID-19 pandemic prompted her to continue her education at USF in 2020 by pursuing a master of arts in global sustainability policy. During her seven years at USF, Jose Morales has worked to inspire local youth, empower refugee families, champion inclusive politics, battle food insecurity and build smarter streets in the Tampa Bay area. 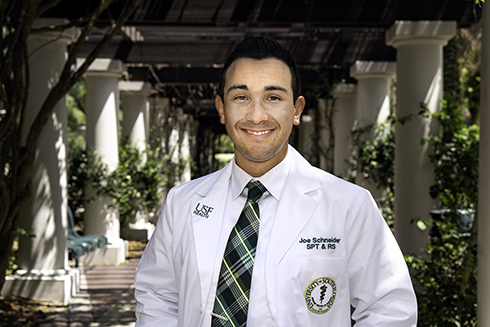 Joseph Schneider was first introduced to the physical therapy profession when he injured his elbow playing baseball in middle school. Schneider had the honor of being the class president of his cohort in USF's Doctor of Physical Therapy program, where he served as liaison between the students and school leadership and planned fun events and study groups. He helped to plan the Florida Physical Therapy Association’s first virtual Student Conclave conference when USF was chosen as the 2021 host. Even through a pandemic and his parents’ divorce, Schneider never wavered and is graduating in the top 25 percent of his class. After graduation, he starts a new job at a private outpatient clinic in his hometown of Bradenton.

9 a.m.: Bachelor’s degree recipients from the colleges of Arts and Sciences and The Arts and the Office of Undergraduate Studies