Low-income teenagers facing food insecurity were more likely to eat cheese sandwiches during school lunch and be bullied because of it according to a recent study conducted by USF researchers. The study was designed to learn about the ways in which teens face food scarcity and on what changes they would like to see.

“School environments are one of the places where teens get most of their food,” said Sarah Bradley, graduate student in the USF Department of Anthropology and author of the study. “For some teens who are food insecure, it may be the only full meal that they get.” 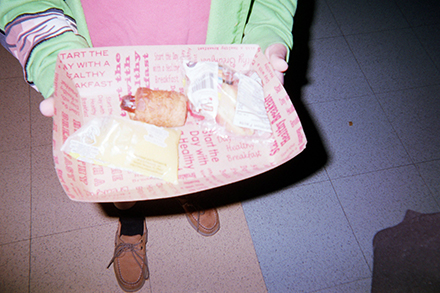 The study centered around different focus groups in four different Pinellas county community centers in collaboration with the Juvenile Welfare Board of Pinellas County and Feeding America. Teens expressed their opinions about the quality, quantity and amount of time they were given to eat a meal. Researchers also found that school environments present challenges for teens where they can be stigmatized as being poor.

Schools provide a standard lunch, but many teens purchase additional supplements as an “upgrade” their meal. Teens behind on their food fees would receive a cheese sandwich instead of a hot lunch, making them a target for being bullied.

Researchers used Photovoice in the study, allowing participants the time and space to collect their data from their own experiences. As a method, the photographs provide a tangible communicative artifact. Researchers and participants presented their findings with a Photovoice exhibit in a public forum where school administrators attended and heard first-hand from the teens. 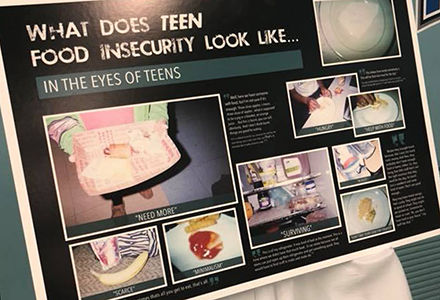 “When I was sitting in that audience I was hearing my customers talking directly to me,” said Lynn Geist, director of food and nutrition for Pinellas County Schools. “I sat there thinking, I have to fix this, we can do better than this.”

Cheese sandwiches were already being pulled from schools, but Geist learned that there was more work to be done. Moved by the teens’ stories and desire for better food quality and presentation, Geist initiated the Student Food Connection Taste Testing program to collect teen feedback about menu items.

“To see an actual material outcome come from this project is very validating and it's very energizing. It makes you want to continue to do this work,” said Bradley.

Bradley began the project with support from professor and Department of Anthropology Chair David Himmelgreen, PhD. One of the main goals was to raise public awareness about teen food insecurity.

“We focus a lot on children, we focus a lot on adults, but teens are often understudied and not well understood in terms of the effects of food insecurity on their health and well-being,” said Himmelgreen. 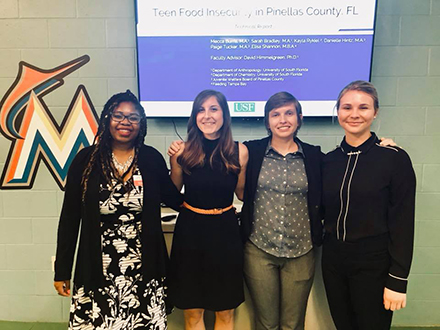 Aside from teens expressing frustration about the stigma and bullying, the research also showed that teens served as a buffer to younger siblings by eating less at home. Some teens also reported turning to shoplifting food items such as canned food or candy.

Himmelgreen’s main research focus has been on the linkages between food insecurity and health in different populations and settings. He helped establish the Center for Food Advancement of Food Security and Healthy Communities with Feeding Tampa Bay, one of several university-food bank partnerships in the country. The center provides research expertise with emergency food relief as well as field research opportunities for students.

“Food is social. Food binds people together. Relationships are established around food. Anthropology brings both theoretical and methodological tools to understand food and how people navigate food scarcity,” said Himmelgreen.

College of Arts and Sciences, Department of Anthropology, Research