USF archaeologists are examining two key sites along Tampa Bay’s shores to better understand the climate conditions that might have caused conflict over food resources among Native American societies. By using several archaeological methods, scientists are able to see a shift in how these estuaries were defended between 600 and 900 AD.

“We know that there were a couple of major climatic episodes during that period that would have been challenging for people,” said Tom Pluckhahn, archaeologist and professor of anthropology in the College of Arts and Sciences. “We see particularly in Tampa Bay where societies were claiming what seem like the best parts of the bay and putting big mound sites and in strategic locations to protect those resources.”

Once full of clam and oyster beds, the estuaries where the mounds were built served as a kind of supermarket for native communities. Generally, native villages had two mounds, one for rituals or ceremonies and the other for burials. While there are more than a dozen intact mounds in Tampa Bay, many of these sites are threatened by rising sea levels.

The study is an extension of a larger project funded by the National Science Foundation and USF’s Research and Innovation Creative Scholarship to examine how native peoples of Tampa Bay responded to climate change over the last 2000 years. Pluckhahn has excavated other areas along the coast, including one of Florida’s oldest native landmarks in Safety Harbor and  identified a pattern that shows an open exchange between communities throughout different points up the peninsular coast of Florida.

“You see a lot of similarity of ceramics and there are these ceremonial centers where people are coming and burying their dead, but we don’t see any kind of fortifications, we don’t see any arrow heads,” Pluckhahn said. “Bow and arrow technology comes into Florida probably around 800-900 AD, at the same time that some of those environmental changes are coming in.” 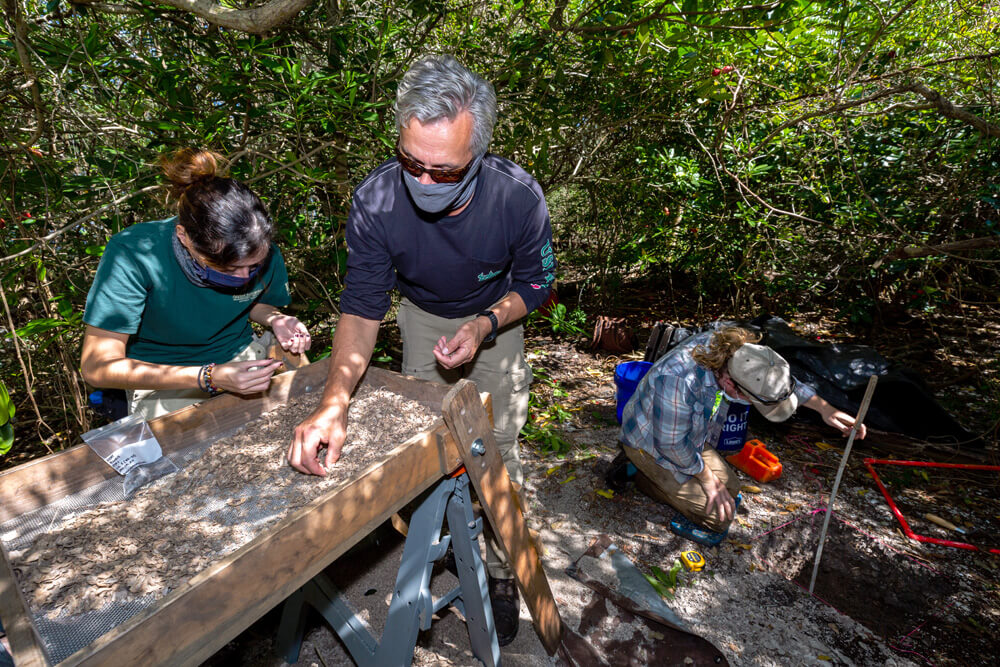 Pluckhahn’s work helps build a clearer picture of the lives of native people before European arrival and highlights the systems they had developed to control and distribute resources. He says there is a lack of archaeological work in the area.

Conducting the intricate work of shifting through soil remains and staging ground penetrating radars is challenging because of the thick mangroves encroaching the sites. Pluckhahn relies on his team of graduate and undergraduate students to collect data. Students get hands-on experience in the field working as part of a research team and find niche areas to expand on Pluckhahn’s findings.

“I wouldn’t have been able to link my sediment cores samples and research question to ancient people without his guidance and the context that his work provides,” said graduate student Kendal Jackson. 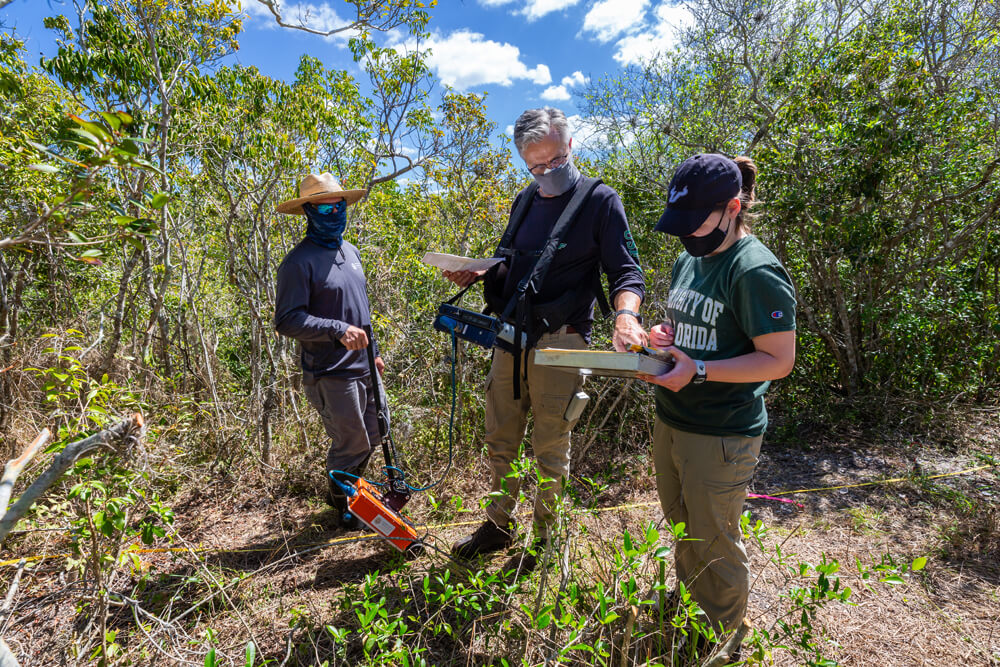 Ground penetrating radar technology is used by archaeologists on one of two sites being studied.

Jackson conducts pollen analysis of core sediments to incorporate a paleo-historical understanding into the sites that Pluckhahn is studying. The project is also funded by a National Science Foundation grant to help him conduct his dissertation work. Pluckhahn has served as a mentor in many ways for Jackson, which has led to employment, published work and professional contacts within the field.

“He’s been a really good advocate for me since I got into the program as an MA student and I feel very fortunate to have someone to look out for opportunities and trust my direction with things,” Jackson said.

Providing students professional experience is not just part of Pluckhahn’s role as faculty, it is also a way to encourage new researchers into the field. Students learn the practices of archaeology by carefully excavating, categorizing and archiving artifacts and learn to connect them to related communities and descendant populations alive today.

“It’s something I see as an obligation to try to find out more information about these sites before we lose them. But it's also kind of a privilege to work at some of these impressive sites,” Pluckhahn said.