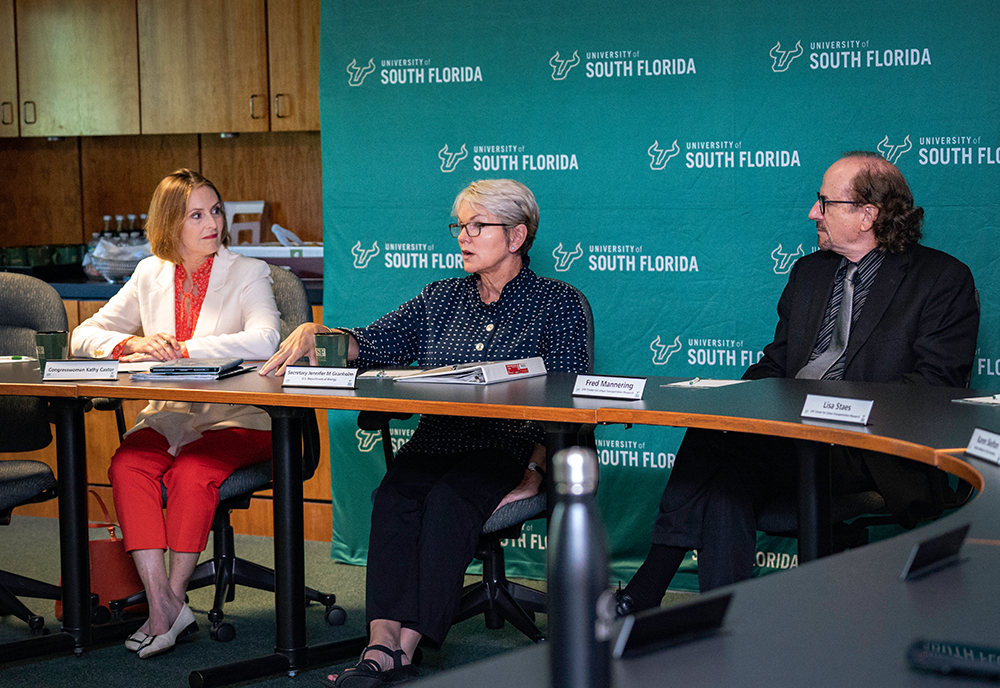 The University of South Florida’s abundance of clean energy innovation and research is earning recognition at the federal level.

U.S. Secretary of Energy Jennifer Granholm was joined by U.S. Rep. Kathy Castor for a meeting with leaders of the USF Center for Urban Transportation Research (CUTR) to learn more about efforts of the Tampa Bay Clean Cities Coalition, which is housed at USF. 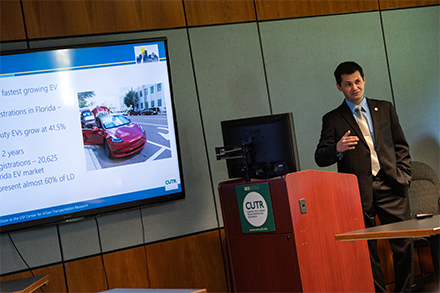 The coalition facilitates the collaboration of 20 government agencies, businesses and organizations working to promote the use of non-traditional and cleaner energy for transportation throughout the Tampa Bay region. It supports the U.S. Department of Energy’s Clean Cities Coalition Network.

“An amazing amount of coalitions are being built here at USF to ensure that we have clean cities and that we’re thinking about how transportation intersects with those cities – infrastructure, training, making sure people are comfortable with electric vehicles, making sure the research is done to ensure the right placement for example, of charging stations – all of that intellectual work and the students who are working on that, it’s a very exciting time to be here at this university in a state that has so much potential,” Granholm said.

“We are poised now to grow by leaps and bounds in powering our lives by clean energy and we’re fortunate that the University of South Florida, our major research university in the area, has the cutting-edge research here at the College of Engineering and the Center for Urban Transportation Research,” Castor said. “I’m very happy that Secretary Granholm is here to see what a lot of those U.S. Department of Energy grants go to, including Clean Cities, bringing these collaborators around.” 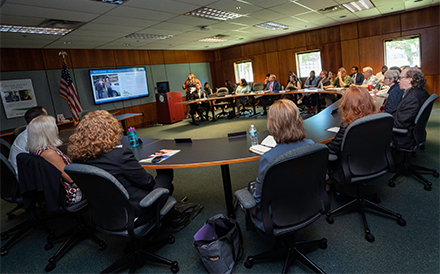 USF researchers shared highlights of some of their most significant initiatives, such as the DOE-funded Florida Alternative Fuel Resiliency Plan – an effort to develop technologies that can offset disruptions to the fuel supply. All of Florida’s petroleum is transported through ports, which are vulnerable to closures during hurricanes. The project is aimed at identifying new ways alternative fuels can be transported through other means.

They also discussed the curriculum they developed for the Tampa Electric EV & Energy Education Program, which exposes high school students to electric vehicles through driver’s ed.

“Secretary Granholm’s and Rep. Castor’s visit was a great opportunity for USF/CUTR to showcase its work in the clean energy field,” said Fred Mannering, executive director of CUTR and professor of civil and environmental engineering. “We look forward to working with them to continue our efforts to support and promote clean energy.”

These are just a few of CUTR’s $36 million in active contracts and grants. It has been heavily involved in the Tampa Hillsborough Expressway Authority Connected Vehicle Pilot and has several ongoing projects to improve the safety of autonomous vehicles.