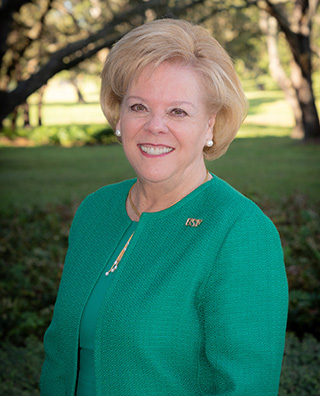 Rhea Law became the University of South Florida’s eighth president in March 2022. A proud fifth-generation Floridian who is passionate about the success of the state, Law is actively involved in corporate, public policy, civic, and charitable work.

The first USF graduate to serve as president, Law has deep ties within the USF community and throughout the state of Florida. She earned an undergraduate degree in management from USF, putting herself through school while working as the university research project administrator for the Office of Sponsored Research. She then earned her terminal degree in law at Stetson University College of Law.

As one of the founding members of the USF Board of Trustees, she spent five years as vice chair and four years as the first (and only) female chair, contributing significantly to USF’s growth and evolution as a high-impact, global research university.

Law has held top leadership positions with many Florida-based organizations. She served as board chair of the Florida Council of 100, the public policy liaison with Florida’s governor, cabinet, legislative leadership, and Supreme Court, and was a two-time chair of the Tampa Hillsborough Economic Development Corporation and the Tampa Bay Partnership during times of reorganization and expansion. She also served as chair of the USF Health Professions Conferencing Corporation, which operates the Center for Advanced Medical Learning and Simulation. At Stetson University, Law was a member of the Board of Trustees and chair of the College of Law’s Board of Overseers.

Law is the former CEO and chair of the Board of Fowler White Boggs, a Florida law firm. In 2014, she led the merger of Fowler with a national firm, Buchanan Ingersoll & Rooney, where she continued to serve as chair of the firm’s Florida Offices until 2021. The consolidation of the firms created a powerhouse firm with law offices throughout the country and hundreds of lawyers who specialize in a broad spectrum of business areas such as Energy, Finance, Healthcare and Life Sciences.

Over the course of her 35-year-plus career, Law has worked with clients on land use and strategic planning to meet the needs of a growing Florida. Her areas of practice included higher education, environment and land use, government, and economic development.