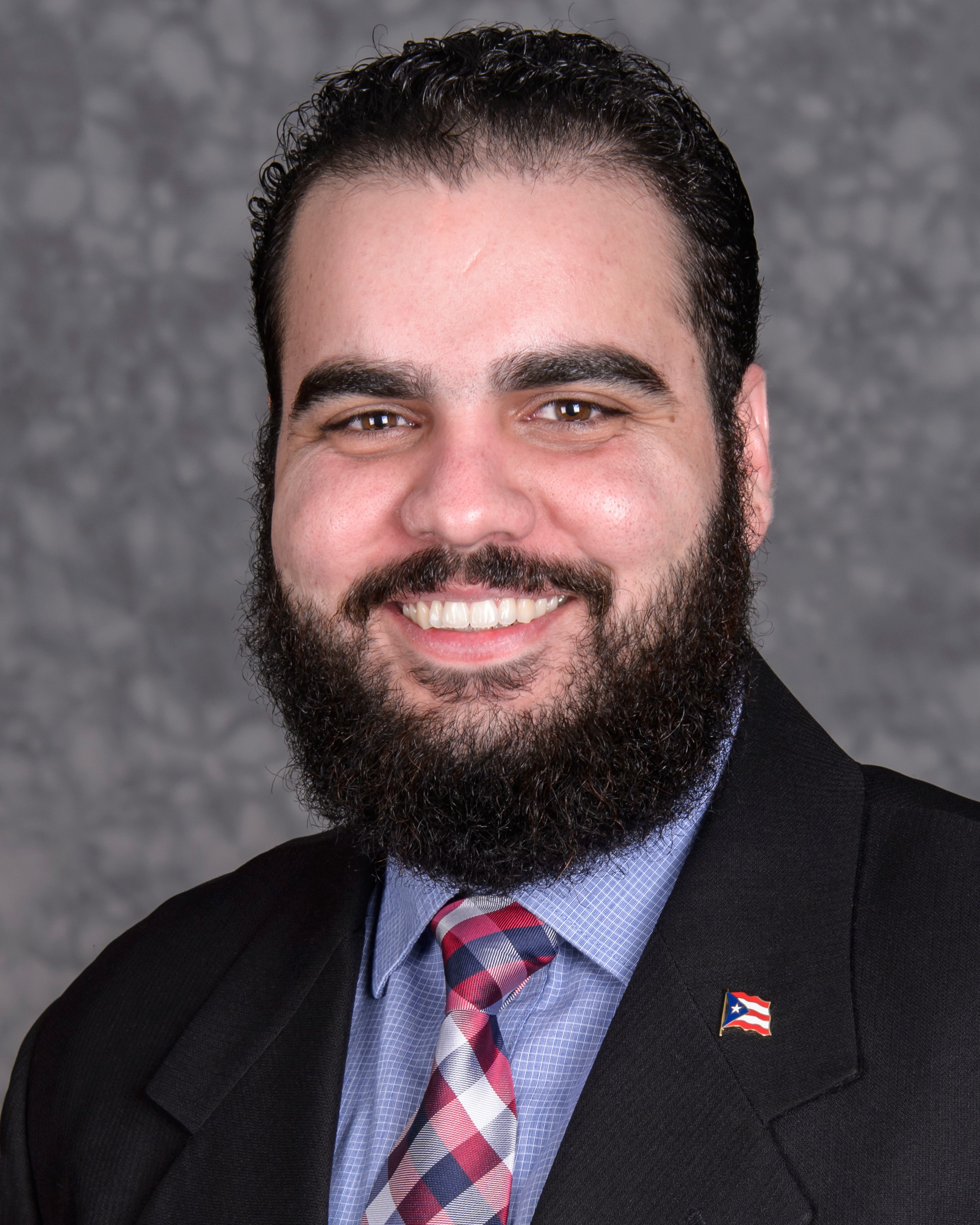 William Serrano-Garcia, a USF Electrical Engineering doctoral student, has received a U.S. Student Fulbright Program award to continue his dissertation research in the study of organic, conducting and semiconducting polymers for nanoscale fiber-based electronic devices at the National University of Singapore (NUS).

According to Times Higher Education’s 2019 worldwide university rankings, NUS is ranked as one of the three best universities in Asia and one of the top 25 universities in the world. In his Fulbright grant proposal, Serrano-Garcia wrote that his research at the university will provide both him and USF the opportunity to pursue long-term collaborations with research leaders in his field.

“It will provide me with the ideal environment to exchange research ideas within a multicultural, international setting to advance my career goal to become a globally-trained scientist,” he said.

Over the past two years, he has continued to nurture collaborations with NUS’s Seeram Ramakrishna, professor of mechanical engineering and bioengineering, and director of the Nanofibers & Nanotechnology Laboratory. Thus far, Serrano-Garcia’s efforts have resulted in two review publications with NUS, including one as a first author. Ramakrishna is a nanotechnology pioneer in Singapore and internationally recognized for his work on the science and regeneration of nanofibers. He is ranked among the most-cited researchers in the world and has co-authored over 1,000 international journal papers.

Ramakrishna will also serve as Serrano-Garcia’s research supervisor during the Fulbright period to achieve the outcomes and publication goals outlined in the proposal.

For his Fulbright proposal, Ramakrishna wrote that Serrano-Garcia will have all of NUS’ research and networking resources to help him accomplish his research goals and develop as an international researcher.

“William will have full access to state-of the-art equipment in all (NUS’) respective laboratories and affiliated research institutes, nearly 25 faculty members from departments across campus, research staff and other students to conduct cutting-edge research activities,” he said. “NUS is a global leader of education and research in materials science and engineering, as we annually host distinguished faculty and guest researchers from throughout the world.”

Serrano-Garcia earned his B.S. in Applied Physics and Electronics from the University of Puerto Rico at Humacao where he participated in NSF-sponsored programs (Partnership for Research and Education in Materials, Puerto Rico LSAMP) and summer research programs at Penn State, University of Nebraska-Lincoln and the National Institute of Standards and Technology. As an undergraduate and graduate student, he has nine journal and conference papers, given more than 20 presentations, and has a patent application with Thomas on organic-based nanofibers. Serrano-Garcia has four papers planned for publication from his dissertation. 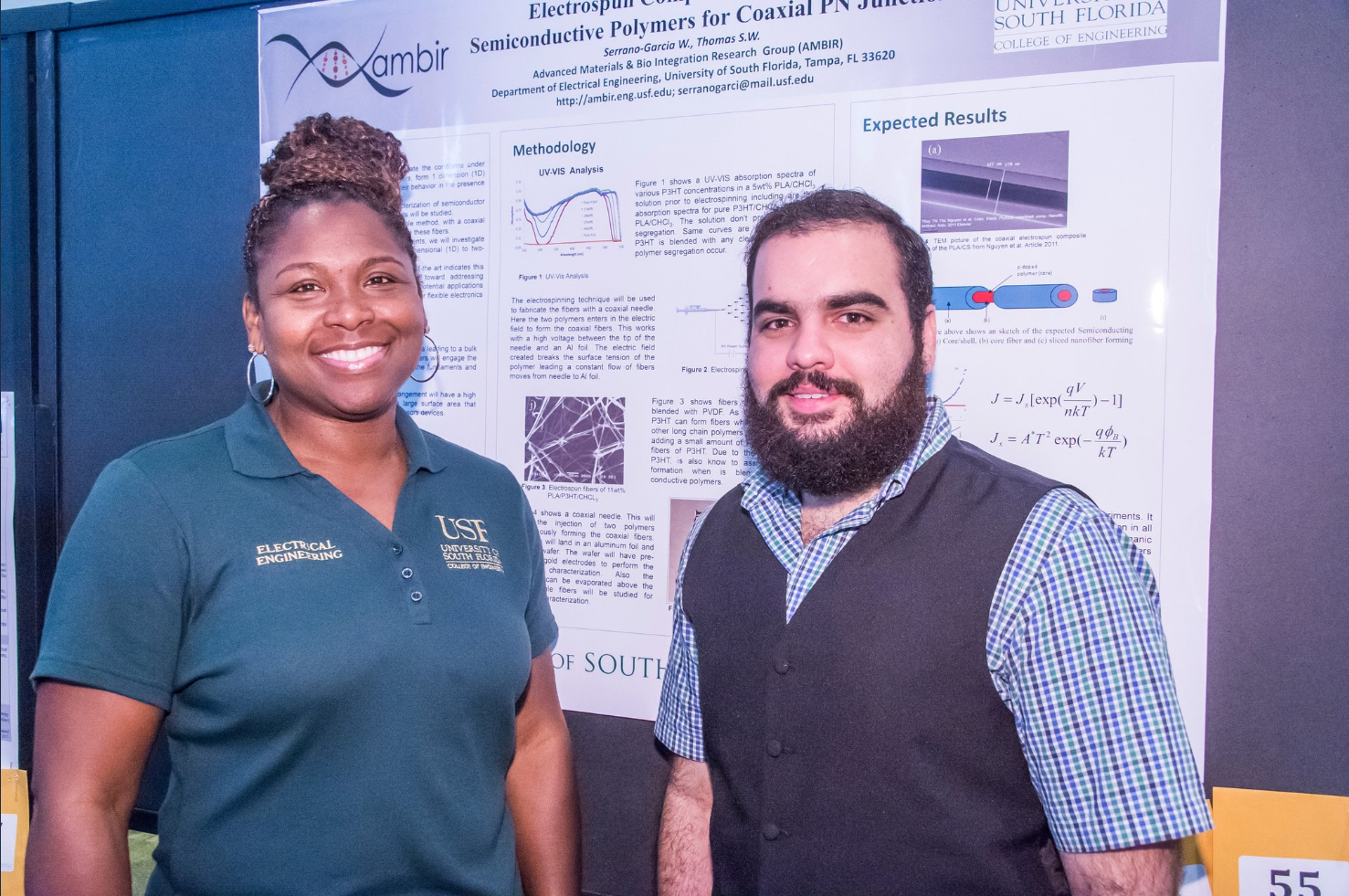 William Serrano-Garcia (right) stands with Sylvia Thomas (left), his major professor, while presenting research as a Ph.D. student and member of the Advanced Materials Bio & Integration Research Laboratory at USF, which Thomas leads.

His work with NUS will be the latest in a series of research collaborations he has cultivated at USF with international universities and research centers, including the University of Bologna, the Center for Nanoscience and Technology Italian Institute of Technology in Milan and the Institute of Polymers, Composites and Biomaterials Italian National Research Council in Naples.

In addition to the international research training during his doctoral program, Serrano-Garcia has participated in research internships with the Air Force Research Laboratory Scholars Program and more recently with the U.S. Department of Energy (DOE)’s Brookhaven National Laboratory with funding from NSF’s Louis Stokes Alliance for Minority Participation program. This summer, he will bring his electrospinning research to Idaho National Laboratory, a DOE-funded federal laboratory. While at USF, he has been supported by the NSF Florida-Georgia Louis Stokes Alliance for Minority Participation Bridge to the Doctorate Activity, the Alfred P. Sloan Foundation Minority Ph.D. Program and the McKnight Doctoral Fellowship Program.

After completing the Fulbright period at NUS and defending his Ph.D. by December 2020, Serrano-Garcia hopes to secure a postdoctoral appointment and eventually a permanent research position at a national laboratory. His long-term goal is to advance leading-edge materials science and engineering research in areas of national need. Additionally, he also plans to continue his STEM outreach activities with the goal of inspiring more students from underrepresented groups to pursue science and engineering careers.