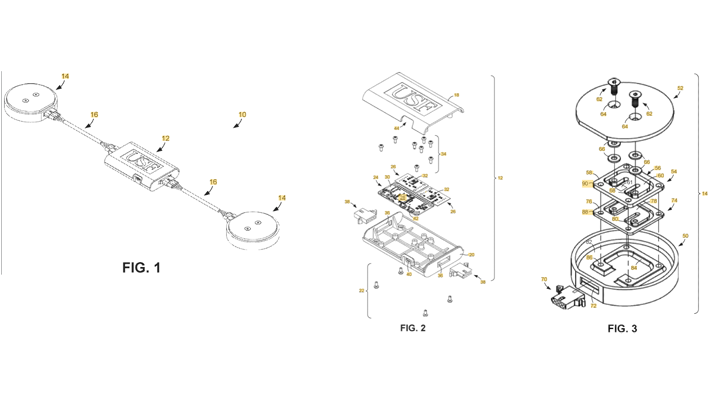 Illustrations of the device from the patent listing the research team secured provide a possible preview of its appearance. The device is broken up into three main components — sensor units (14), communication cables (16) and a center control unit (12).

Over the course of 15 weeks, USF researchers developed a wireless sensor system which continuously and passively monitors presence and weight of a person in bed, on a couch, chair or similar furniture that could have great potential impact on users’ quality of life comparable to current sensor systems on the market.

Vandeweerd has spent over a decade researching the health needs of residents in age-restricted community The Villages, and she and Yalcin have collaborated on a number of health-focused research projects since 2014. These projects and Vandeweerd’s extensive research experiences at The Villages revealed that a resident’s bed was a critical source of data for several metrics used to determine a resident’s health. These include weight, changes in sedentary behavior and time spent sleeping during the day.

However, they were unable to collect any of these metrics with available home health monitoring tools on the market at the time. Many were relatively expensive sensor pads that were difficult to integrate with other home health monitoring sensors, irritated residents who slept on top of them, degraded and needed frequent changing, and couldn’t reliably differentiate between people and other objects like a suitcase or a floor fan.

“There’s a lot of companies who’ve tried to move into the home health space, but so far none are doing it in a comprehensive way — combining the engineering needs, human needs and healthcare needs,“ Vandeweerd said. “It’s a three trillion-dollar industry, but the telehealth space is very much in its infancy, and at the end of the day, 85% of health happens at home. It’s in the choices we make every day in our daily home environment, and late intervention is costing insurance companies thousands and thousands of dollars.” 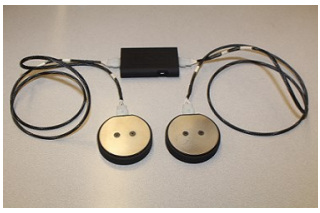 The team currently has a working prototype of its home health monitoring device, pictured here. Yalcin said he slept with it under his own mattress for several months to help collect test data and verify the device’s reliability in real-world conditions.

“We set off to create a system of sensors that could be placed in the home to monitor older adults’ well-being and health,” Ali said. “That includes certain conditions that could be deteriorating or improving.”

To start creating a better sensor solution, the team first decided that their sensor would be placed under residents’ beds as opposed to within them where they could irritate residents. The device’s two sensor units would sit between the floor and the bed. This meant that they needed to be usable with any bed frame the resident might have, ranging from newer frames with novel shapes to older frames that roll around on wheels, while remaining operational under weights of up to several hundred pounds.

This created the toughest design challenge the team faced — making a sensor unit housing thin enough to be unnoticeable by its user, strong enough to withstand certain pressures, rust and electrical shortages from spilled drinks, and reliable enough to report accurate data over longtime use.

The final design the team chose was based on a traditional strain gauge — a type of sensor that converts force into change in electrical resistance. After modifying strain gauge sensors available on the market to have an increased load rating, the team was able to create a housing that met all their desired criteria.

The size of the units needed to be minimized as much as possible, with the team opting to use rivets instead of standard screws to fasten the sensor units’ internals to their housings. Every added millimeter reduced the likelihood that the internals would fit neatly within their shells.

“We when we did a demonstration for Dr. Yalcin, I asked him to sit on a table the sensor unit was under, and I guessed his weight,” Starowesky said. “The unit was sensitive enough to detect a coffee cup sitting on the conference table and even where the cup sat depending on how many sensors we used. It was a really cool byproduct of what we decided to do and added so much more capability than we set out to at the start.” 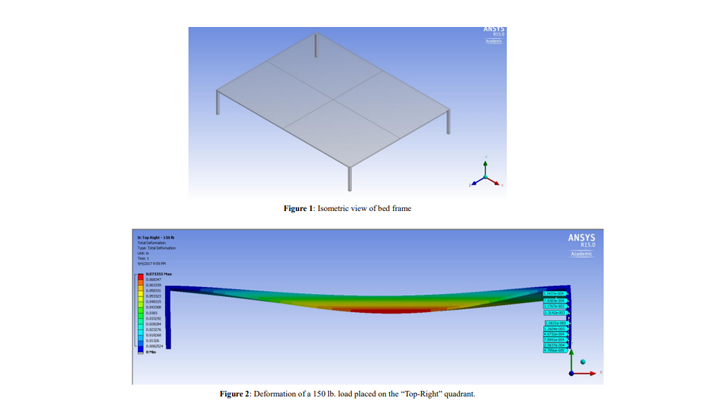 Part of the sensor unit development involved modeling a queen-sized bed frame using engineering simulation software Ansys to examine how to most accurately determine a user’s weight given deformations the bed frame experiences under load. 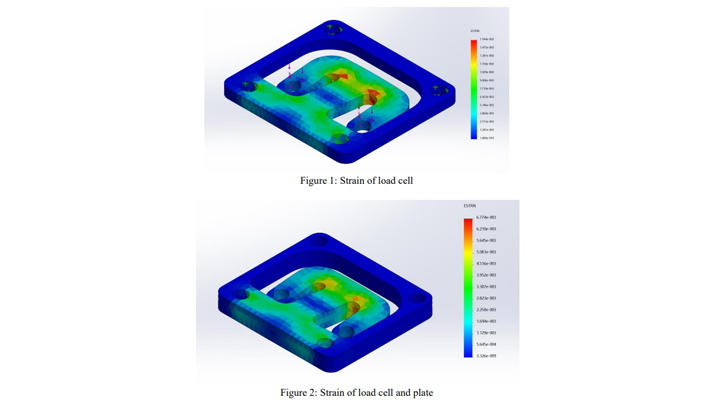 By adding an additional plate to the sensor unit load cells, the team was able to significantly reduce the amount of strain on the load cells alone. The above graphic shows how weight is distributed before (top) and after (bottom) adding the additional plate, with the darkest colors representing the lightest weights and the brightest colors representing the greatest weights.

Pictured between the sensor units lies the device’s central control unit — a plastic housing containing a Raspberry Pi, which is a credit card-sized computer that records and stores data sent by the sensor units. The Raspberry Pi allows the device to maintain an Internet connection with the user’s Wi-Fi network, which means that it never needs to be adjusted once installed to receive an update from the researchers or healthcare providers receiving data from it. It needs to be connected to combine the data the device collects with data from other sensors in the home to effectively monitor the user’s wellness.

The device is also powered by a standard USB cable that can be easily and inexpensively replaced. All of the device’s components were chosen to keep its cost of production low, which will also help minimize its possible retail cost if brought to market.

“This project is largely student-driven, and I think it speaks to the talent and dedication of Carlos and Reese that they were able to make this and challenged the experiences they already had as people who'd both been in the workforce and helped drive this project to fruition in 15 weeks,” Vandeweerd said. “It also speaks to the caliber of students that come into the mechanical engineering program, and if you can do this as a student project while you're in school, imagine what you can do in the workforce when resources and time are not nearly as constrained.” 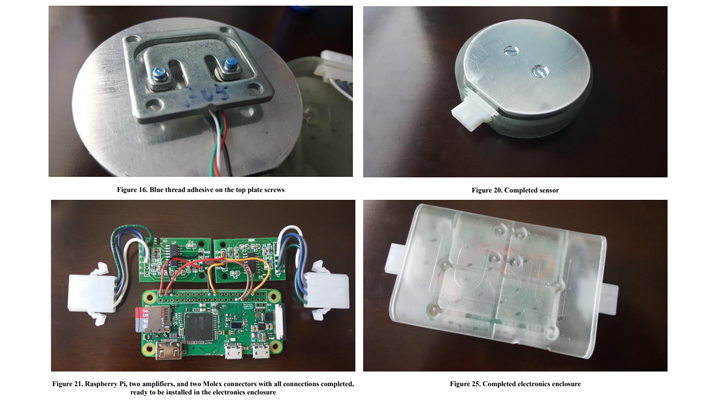 Pictures included in a build report on the device show how its strain gauges and the Raspberry Pi all fit into their housings.

In addition to having clear-cut goals throughout developing a prototype, Pena’s and Starowesky’s previous design experience at the local engineering companies they’ve worked at helped them complete the device within a semester. Starowesky said that taking Kaw’s numerical methods course as well as a SolidWorks course at USF supplemented his existing knowledge well, and Pena said that reflecting on Kaw’s advice was specifically helpful in modeling how force moves across the simulated beds used in development of the device.

Pena and Starowesky both used components created at work in the device prototype, leveraging specialized component production capabilities. That includes Pena sourcing the cable assemblies and the center control unit case custom from scratch, while Starowesky sourced many of the device’s components that were 3D printed with a precision medical 3D printing process.

“I was working for them at the time, so they were glad to help. We ordered samples from school, and I gave them the part specs, and they built them the way we wanted,” Pena said. “All of my professional experience has been with cable assemblies, similar to the ones used in this device. Just having the experience with different gauge cables and connectors helped us find the reliable connector we knew wouldn't degrade over time.”

Following the team’s obtaining a patent for their device, they hope that potential licensing will lead to the possibility of the device being brought to market. Kaw said the team has already been in talks with an international hospital bed manufacturer that may wish to create a bed model with some form of the teams’ device built into it.

“That’ll be a nice place where this can be put into market,” Kaw said. “When it comes to people’s homes, we have to be concerned about how they’ll be installed and who’s maintaining them, but if it’s in a hospital bed, it becomes a part of the manufacturing process.”

Beyond integration into other medical products, Vandeweerd said that the device may also be a part of a future homebuilder’s set of features in a smart space. The team’s device could one day be part of homes that are well-suited for those that benefit from home healthcare on their own terms.