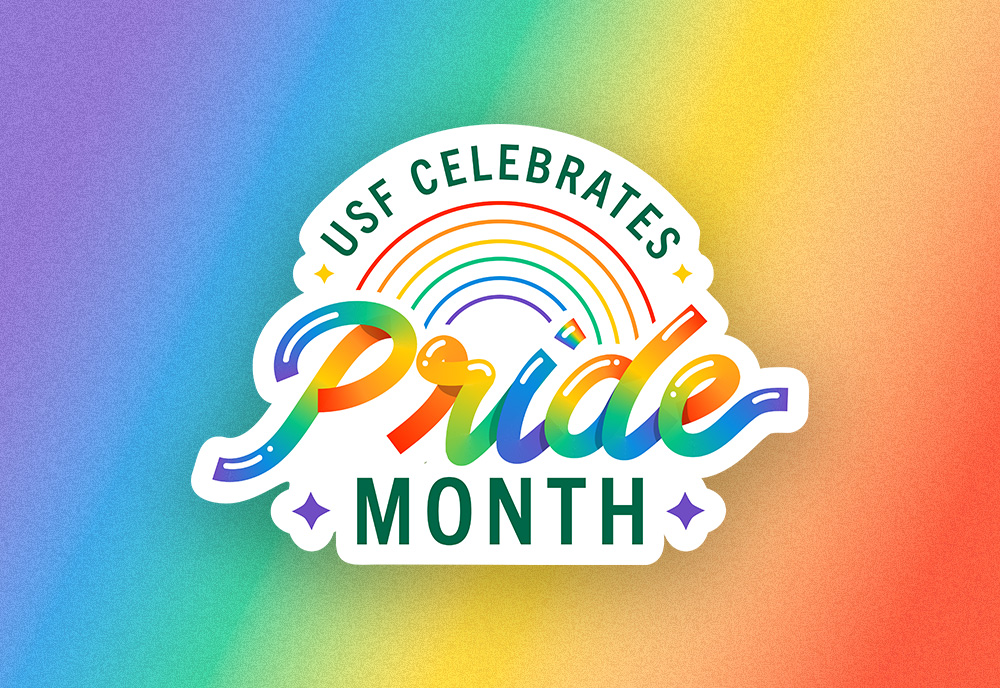 June is Pride Month, a celebration that recognizes the impact of the LGBTQ+ community. The month also focuses on the important and ongoing work to achieve equal justice and opportunity for Americans who identify as LGBTQ+, an inclusive acronym that represents the lesbian, gay, bisexual, transgender, queer and/or questioning community. The “+” symbol is meant to recognize identities that are not specifically represented in the acronym.

Pride Month was initially inspired by the 1969 Stonewall Uprising, a series of demonstrations by members of the gay community sparked by a police raid at the Stonewall Inn in the Greenwich Village neighborhood in New York City. The raid and ensuing riots mark the start of the gay rights movement. The first Pride March in New York City was held on June 28, 1970, on the one-year anniversary of the Stonewall Uprising. 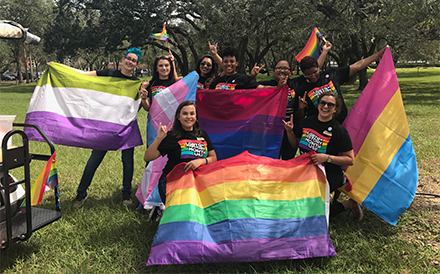 Advising the USF president on issues that affect the LBGTQ+ community is the Committee on Issues of Sexual Orientation and Gender Identity (CISOGI). The goal of the committee is to support LGBTQ+ individuals and communities at USF by acknowledging achievements, raising visibility, sharing information and enhancing connections. The committee, whose members are appointed by the president, also advocates for meaningful policy change, resource allocation and training to maintain a thriving and diverse community of LGBTQ+ students, staff, faculty, alumni and community partners. Among their efforts this year was the work to expand the inclusiveness of the university policy that would allow students to use their chosen name on ID cards and other identification materials. 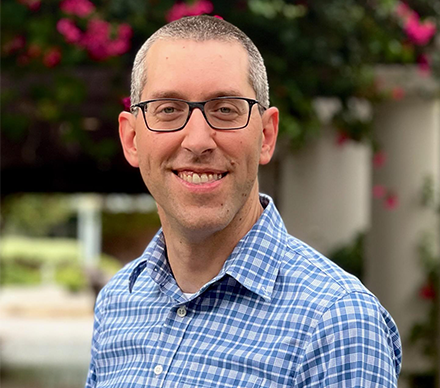 Michael Rogers, chair of the Committee on Issues of Sexual Orientation and Gender Identity (CISOGI)

CISOGI also promotes USF’s inclusive environment to the broader community, often by participating in the region’s Pride and cultural events and by connecting with organizations such as the Tampa Bay LGBT Chamber.

“There is much work to be done and having a committee at USF that reports directly to the president signals a commitment and willingness,” said CISOGI chair Michael Rogers. “It indicates the importance of the LGBTQ+ community within USF and a desire to make sure that all LGBTQ+ people feel welcome and included. For anyone interested in how change happens at an organizational level, I encourage them to get involved.”

CISOGI is also proud to be one of the sponsors of USF’s Lavender Ceremony, an annual event celebrating LGBTQ+ student graduates. Lavender graduation ceremonies are held on numerous campuses throughout the U.S. to honor lesbian, gay, bisexual, transgender, queer and ally students and to acknowledge their achievements and contributions to their university community. 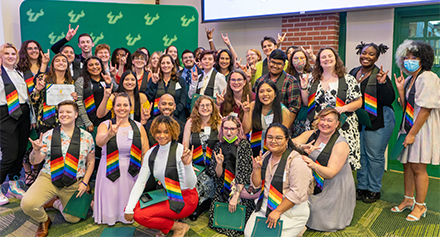 USF’s first Lavender Ceremony was in 2019 with 50 student participants. This year’s ceremony, held April 13, recognized 117 graduates, the largest number to date. At the event, Pride Awards are given to recognize allies for their support of the community.

OMA also partners with the broader community, carrying a message of support and inclusion. In October, which is LGBTQ+ History Month, the OMA and Tampa campus and community partners host a series of events to celebrate and educate the campus community about social justice and civil rights issues related to the LGBTQ+ community. For Pride Month, OMA oversees USF’s annual participation in the St. Pete Pride Parade by purchasing a block of tickets and participating in the parade. This year’s parade is set for June 25 and marks the 20th year of St. Pete Pride events. 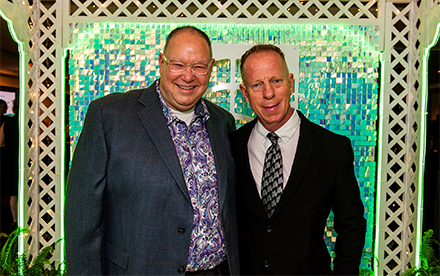 The USF Alumni Association also supports a scholarship for LGBTQ+ students, which St. John-Fulton and his husband, Stephen, are proud to support.

“We know that LGBTQ+ folks are disproportionately disadvantaged when it comes to college,” St. John-Fulton said. “Between homelessness and other challenges, these scholarships are tremendously important.”

“When I graduated, I was told that joining the LGBT alumni group would hurt my chances of finding a job,” said Wallace, a licensed professional engineer who worked at General Electric for 25 years. “That is no longer true, and I see USF working to bridge the gap by helping new graduates connect with mentors who have been out in the world.” 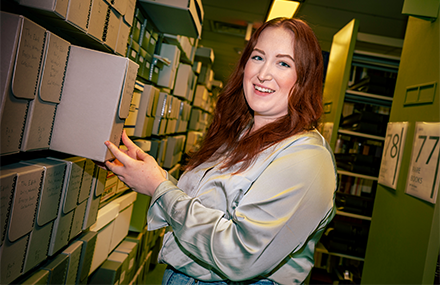 While much of the work to support LGBTQ+ Pride is future-focused, current student Emma Frank has been inspired to raise the visibility of the LGBTQ+ community through an historical perspective. As a digital humanities intern at USF Libraries, Frank’s interest in queer fiction eventually led her to create a digital exhibit that investigates themes and events in queer history and literature. The online exhibit, “Queer Life and Literature in the 19th Century”, was created using StoryMap, a software application that became widely used to share digital content during the pandemic when in-person access to library collections was limited.

The exhibit is part of the Libraries’ Special Collections, which includes more than two dozen archival collections and thousands of monograph and journal volumes written about or by the LGBTQ+ community. Major themes throughout the LGBTQ+ Collections include identity, sexual orientation, gender identity, gender studies, feminism, activism and legal rights.

Frank, a double-major in English literature and history with a minor in queer and sexuality studies, says that literature played an important role in her own coming out process as well as determining her academic path.

“When I first decided that I wanted to go to school to be an English lit major, I had just read ‘The Picture of Dorian Gray’, which is one of the heralded texts of queer literature that's also classical literature,” Frank said. “I loved it, and I loved getting the chance to talk about it and research it.”

At USF, Frank’s decision to combine coursework in history, literature and queer studies allowed her to develop a focus for her research on queer life in the 19th century, through the lens of literature. Frank says the work of two of her history professors, David Johnson and Brian Connolly, on gender and sexuality in American history was foundational to her decision to pursue the research that inspired her digital exhibit.

“It’s empowering and powerful to do research that affirms the idea that these identities — these emotions — have always existed. We just didn't have the words that we have now to talk about them,” Frank said. “It's still a very under-researched area of literature and literary history, but once people know about it, they are really interested in it. Getting the chance to do work that is meaningful and has some sort of exterior value feels amazing.”

Frank’s minor in queer and sexuality studies was first offered at USF in 2018 and examines the rich history and cultural contributions of LGBTQ+ people as well as the processes that have structured sexual relations in different contexts. The minor prepares students for post-graduate study in queer studies and/or prepares them to enter the workforce with greater cultural sensitivity to the needs and issues of LGBTQ+ community.

Diane Price Herndl, professor and chair of the Department of Women’s and Gender Studies, which houses the minor, says the response from students has been strong.

“Students from a wide variety of backgrounds find that the minor can help them not only be prepared for a diverse world, but specifically for a diverse working world where companies of all sizes are trying to figure out how to support a workforce that is increasingly diverse in all sorts of ways,” Price Herndl said. “We’re also working to keep up with the exciting developments in scholarship as people begin to look at the significant contributions of LGBTQ+ people over the centuries and at the difference it makes in all sorts of fields when you look at subjects with a queer eye.”

“As feminist work has evolved, we’ve come to realize that binary male/female understandings of the world are important, but that they have lots of effects beyond just contributing to the oppression of women,” Price Herndl said. “Gender identities are more complex, and they really cannot be untangled from other aspects of our identity (like class, race, ethnicity, sexuality or ability). Those who were re-imagining the department in 2009-2010 wanted to reflect that in the name.”